Of course, public lands aren't only federal, and many local, county, state and other related government agencies call attention to the day, hold events, waive fees for access, etc. as well.

While many sites have volunteer activities, many don't.  I have always been surprised that few cities aim to leverage this day (or National Trails Day in June) as volunteer and publicity opportunities, even though NPLD is considered the largest single day public lands volunteer event across the US.

As usual there are many issues.

In this blog, we frequently raise three issues.

1.  Scenario planning and planning for the possibility that federal and/or state parks can close, either for federal politically-produced shutdowns or budget cutbacks and that localities should plan for this possibility, so they can react quickly when circumstances change ("Federal shutdown as another example of why local jurisdictions should have more robust contingency and master planning processes," 2013).

2.  Facilitating access to parks for pedestrians and bicyclists, and adding transit services as appropriate ("A gap in planning across agencies: Prioritizing park access for pedestrians, bicyclists and transit users compared to motor vehicle access," 2015).

3.  Treating the urban forest in cities as a single entity, an urban arboretum ("Arbor Day"). 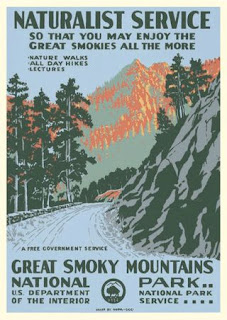 Blog commenter Edward Drozd made a great point about adding to the parks and open space portfolio to better serve the more populated areas of the East and Midwest.

5.  Federal parks agencies for the most part won't distribute non-federal locally produced brochures and other visitor materials.  This is a problem for cities especially, and DC.  The federal sites do not provide local information, and often don't even provide information on nearby sites run by different agencies.

6.  In the DC area, the National Park Service should have an overarching visitor center, the Greater Washington NPS Visitor Center, providing information on all the parks and sites, rather than rely on all the individual sites and more parochially-focused visitor centers.

Dissatisfied with the limited amount of parks marketing by NPS, Utah Tourism created its own promotion program for the national parks in the state, calling them "The Mighty 5."  Now the parks are "too successful" ("Tourists Heeding Utah's 'Mighty 5' Campaign Overpower Moab," Wall Street Journal, "Utah Wanted All the Tourists. Then It Got Them," Outside Magazine).

11.  Sound management and politics.  There is always oppositional tension between Republican and Democratic control of these agencies.  The Trump Administration looked at some privatization, reduced the size of certain sites ("Biden expected to reverse Trump’s order to shrink Utah national monuments," National Geographic), and moved the Bureau of Land Management HQ to Grand Junction, Colorado from DC--the Biden Administration is moving it back ("Trump Packed a Federal Land Agency Off to Colorado. Biden Is Bringing It Home," Mother Jones).

12.  Climate change (Adaptation to Climate Change in Public Lands Management, Resources for the Future, "Why we need a climate plan for our public lands," Wilderness Society). We see this in terms of water and drought, sea level rise, and wildfires.  This year, hydroelectric power generation is being threatened by drought.  Canyons are resurfacing as water recedes ("Scientists Are Studying The Changes Occurring In Glen Canyon As Lake Powell Recedes," KUER/NPR).   But also in how public lands are used for resource extraction, especially fossil fuels.

Many state PBS groups produce and televise programs on public lands including "Outdoor Idaho" and "Outdoors Maryland."  Programs from all around the country can be viewed via PBS's Passport television access platform available to donors. 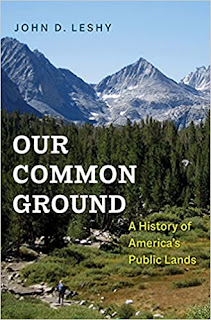 A book to be published next year, Our Common Ground: A History of America's Public Lands, by lawyer John Leshy, who served as solicitor for the US Department of Interior, is the author of a definitive casebook on federal public lands law and is an emeritus professor of law.

Kinda pathetic. In the past, there was a funding stream as part of the every 5-6 year transportation funding bill, for transit related projects in association with federal lands.

But the "modern" Republicans ended it.