School's back in session for many universities. 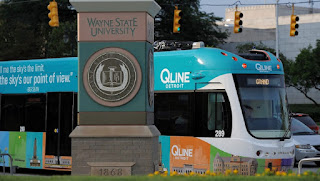 There is an article in the Detroit News, "Why Wayne State is offering free public transportation to students, staff," about how Wayne State University is shifting money it had spent on poorly used shuttle buses to instead pay for transit passes good on the area bus services (the city and the suburbs have separate systems), the city bike sharing system, and the QLine streetcar on Woodward Avenue.
This program is open to students and staff.  (Article access requires subscription, but you can access it from a typical public library system's articles database.)

The SF Muni program is providing college students with free transit access too, this and next year, paid for by Covid stimulus monies.

It makes me think of the conversation I had with a planner at Towson University, who said "we should think about 'safe routes to campus' and all the ways--transit, biking, etc.--we can facilitate it."

A bunch of best practices.  Many universities have agreements with local transit services for student access.  For a time (until the 2008 recession), Central Washington University in Ellensburg made its transit system open to residents.  University of Maryland has an extensive shuttle bus system, and College Park residents could pay for a pass, and the University bus service also operated the special Route 1 bus service in that corridor.  Baltimore's Collegetown program has a shuttle bus operating between university campuses.

About 20 years ago, this was an area of interest for UCLA planning professor Donald Shoup  ("Unlimited Access: Prepaid Transit at Universities,"). 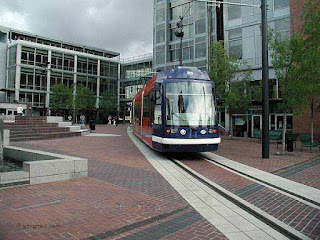 Portland State University funded a stop for the campus on the streetcar line, and provided right of way through the campus. Oregon Health Sciences University operates the Portland Aerial Tram.

But sadly, some universities like University of Southern California and Norfolk State University have been resistant to facilitating access to local transit systems.  Some don't plan for it at all.

Harvard University has paid for a number of bike sharing stations serving its campuses.  UC Davis when it first built its campus, made it walking and biking centric, banning cars from the central section of the campus.  Other campuses have bike rental/use programs, have bike repair shops on campus, and extensive intra-campus bike lane systems, etc. 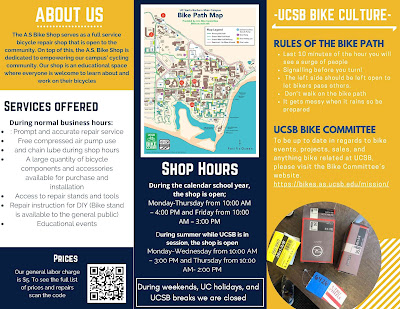 University of Utah has provided subsidies to faculty and staff for e-bike purchases. Some universities have bike master plans and the League of American Bicyclists "Bike Friendly" program includes universities, who vie for designation.  Baltimore's Collegetown program has a system of bike routes between campuses as well.  (I argued that Baltimore County should have tried to extend such routes to Towson University and UMBC.)

University of Utah has an arrangement with the transit authority so that tickets for sports events (football, baseball, gymnastics, basketball) also provide transit access for no additional charge ("Hate Stadium Parking and Game-Day Traffic? An Idea," CityLab).

Sustainable mobility programming and college campuses.  I have three pieces that are particularly relevant:

-- "Innovative University Transportation Demand Management Programs," 2014
-- "College towns of a certain size as an opportunity for sustainable mobility nirvana," 2018
-- "This week is Bike Week at the University of Utah," 2018

The basic point is that college can be a good time to "imprint" students with best practice paradigms about sustainable mobility that they can adopt going forward, beyond college (fingers crossed, but I'm not totally convinced).

Certainly, living in Ann Arbor, mostly walking, but biking some and occasionally using either the University shuttle service between campuses (one year I lived on the route, but I still didn't use it much) or the city bus service, primed me for adopting sustainable mobility practices once I moved to Washington.  But plenty of college students are anti-transit and remain so after they graduate. 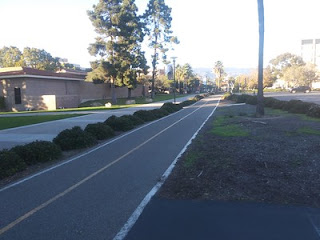 Promotion must be constant.  But that if you're going to promote sustainable mobility practice, it needs to be constantly emphasized and promoted, and multiple initiatives need to be adopted--especially because every year there are new students, AND YOU NEED TO START IN THE FALL TERM because that's when students come back to school.

For example, University of Maryland does its "bike week" in April, when school is almost over, while University of Utah does their "bike week" at the start of the fall term. (But Utah doesn't participate in the city bike sharing system.)

Ideal program elements.  A "sustainable mobility expo" needs to be held every fall at the bare minimum.

And more than just providing access to bike sharing--which many universities don't do at all, universities should have bike purchase programs for students and staff, bike maps (posted), repair facilities, etc.

States should require as part of campus planning requirements, that colleges be required to do sustainable mobility planning (biking, walking, transit).  For example, in Maryland there are no such requirements.  Some universities care and do it, others don't, even in the same county.

Similarly, cities should include transportation demand management planning requirements on colleges and universities, including for sustainable mobility (biking, walking, transit).

Secure bike parking should be a minimum requirement, as bike theft on campus is a perennial problem.

Good quotes on price per passenger and about high costs driving airlines out of Pittsburg.

Interesting. Thanks. That is interesting. I'd think that cost per passenger is mostly about the number of passengers? The Pittsburgh thing I think is a chimera. Its costs rose because the airlines moved away from the hub model, at least from less well located airports (eg Dallas or Newark as a more central hub versus Pittsburgh or St. Louis)?

I've been mulling over writing about LaGuardia, where the bad AirTrain proposal can now be scuttled since Cuomo is gone.

Although it's not totally Cuomo's fault, until the Biden Administration changed the rule, FAA didn't allow airport monies to be used to fund transit expansion to airports by existing systems, with the belief that the airport would be subsidizing the local transit system, rather than looking at agglomeration economies/network effects as benefiting the airport as much as the local transit system.