(Preparing for another "revisiting" post, this occurred to me as well.)

Theodore Roosevelt Island is one of the many national parks in DC ("Defining National Park Service installations in DC as locally or nationally serving," 2019).  It is unusual in that it is an island park, in the middle of the Potomac River.

Working on a civic association initiative in Foggy Bottom in 2007, some participants pointed out the park was inaccessible from DC. There is a bridge from Virginia, and the access point includes a parking lot. 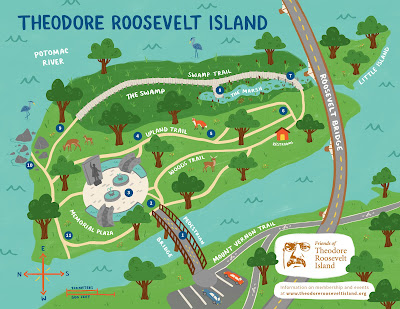 Park access is a big issue generally, in DC and many other places ("A gap in planning across agencies: Prioritizing park access for pedestrians, bicyclists and transit users compared to motor vehicle access," 2015).  Too many places fail to systematically plan and implement high quality park access for multiple modes.

I don't remember the group's specific recommendations, but in 2018 I suggested at the least, a water taxi service in the summer, using water taxi services for Governors Island in New York City, between New London and Groton Connecticut as examples, and boat access to the Anacostia River as sponsored by the Anacostia Watershed Society ("Why not a summer "water taxi" service to Roosevelt Island in the Potomac River"). 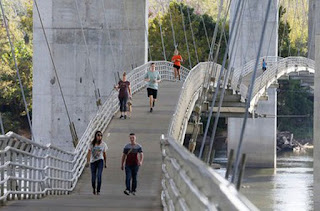 Runners and pedestrians along a bridge suspended under the Lee Bridge over the James River from Belle Isle, in Richmond, Va., where you'll find locals exploring the 54-acre island and resting on its rocky shores. Belle Isle was first explored in 1607 by Capt. John Smith, who helped establish England's first North American settlement in Virginia.

Looking at the National Park Service map of the National Mall for a future posting, it occurs to me that you could build an add on pedestrian bridge to the Theodore Roosevelt Bridge of I-66.

Just as there is a bicycle bridge appended to the 14th Street Bridge between DC and Virginia, or the Belle Island Pedestrian Bridge, constructed under the freeway bridge for US 1/US 301, providing access to Belle Island, which is part of the James River Park System in Richmond.  The Belle Island bridge opened in 1991. 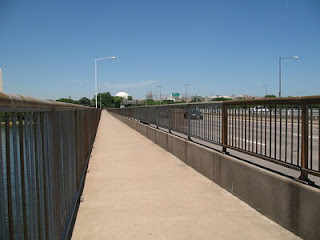 It wouldn't be the absolute best location, from a usage standpoint, it'd be better to do it from the Georgetown waterfront.

Although the plus would be the access point would be from Rock Creek Park and the bike trail, and is close to the Kennedy Center.

OTOH, this option would have minimal negative effect on the Potomac River viewshed, because this particular location is already marred by a bridge.

Such a project would be eligible for federal transportation funding.

Ideally, it could be part of a broader initiative to improve park access throughout DC.

"Two gems of Golden Gate Park will be free for S.F. residents — and more expensive for tourists"

It turns out that NPS produced an Active Transportation Guidebook to promote walking and bicycling in parks, in 2018.

Article about a planning review concerning access and movement for vehicles, bicyclists and pedestrians in Toronto's High Park discusses the tension between natural areas preservation and active use.