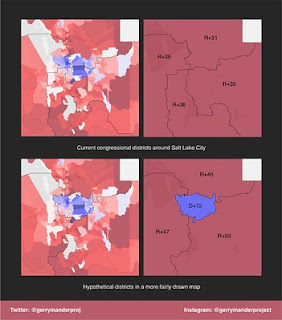 Top right, how Republicans organized the state's House districts after the 2020 Census.

The biggest reason I didn't want to move to Utah (we moved to join our household with my wife's aging parents, her father, who had dementia, died in February) is because the politics are so nasty.  Utah is one of the reddest of the red states, with a Senator and Congressmen who abetted the insurrection, a State Legislature that is 70% Republican and 90% Mormon, and gerrymandering designed to dilute the progressive counterbalance of Salt Lake County.

But I thought it would be okay, because Salt Lake County and City is pretty progressive, all things considered.  But since we moved here in Fall 2019 it's only gotten worse--partly because I am now more familiar at a granular level of the b.s.

Gerrymandering is even worse than before.  If districts were organized fairly there would be one Democratic Party represented House district in Utah.  But Republicans use the "organizing concept" of linking rural and urban areas as a method for diluting Salt Lake County by making districts as wedges.  Salt Lake County is about 1/3 of the state's total population.  In the 2010 cycle they divided Salt Lake County into three of the four districts.  In the 2020 cycle, into all four of the districts.

Republicans aver that the reason that Democrats don't get elected to statewide office is because of lack of organization, not because they way they organize political districts is designed to prevent Democrats from developing critical mass and building outward.

And the Governor says when progressives complain, "Vote."

Before we moved here, a referendum was passed to have an independent redistricting commission.  But referenda are not binding, and the Utah Legislature vitiated the process.

Good thing that the Supreme Court said that gerrymandering isn't a violation of the Constitution.

Was in Montana over July 4th.  Montana, Idaho and Wyoming ("Rigid brand of national politics in state capitols is likely to have economic consequences," Washington Post) are even worse.  But that's no consolation.  People we had dinner with were saying "well Utah must be better you have Romney."

Romney's done one good thing.  He is still a conservative corporate Republican and isn't working to reorient the state politics away from authoritarianism, let alone national politics.  But he has good pr.

Preemption of local action.  The other thing that the State Legislature is very good at is laws directed at Salt Lake City, taking away local authority, such as to create historic districts.

It's a very aggravating situation.

A new measure of the bleak, alarming partisan divide in America