a project that DC oficemates Susannah Wells and Effie Kapsalis recently launched after Kapsalis visited Austin, Texas, home of the Keep Austin Weird movement. Their mission: to call attention to the parts of DC life that thwart its conservative reputation, from burlesque dancers to roller derbies and drag races, as well as local businesses trying to make their mark.

(Disclosure: I know the initiators of the Keep DC Weird project although I didn't know about the project.)

This dovetails with something I have been thinking about for a couple weeks, a "performance-public" art project currently staged in Coney Island in Brooklyn, a demonstration of water-boarding. See "Coney Island Sideshow Has Guantánamo Waterboarding as Its Theme" from the New York Times for more. 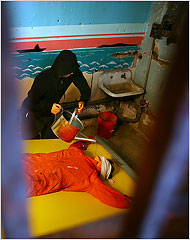 But thinking of art and political expression, isn't it amazing how rare it is for significant politically oriented public and performance art to be produced within DC, which is the center of political power in the United States and therefore the world? (Protests too seem to be something that happens on the Mall but don't impact the every day all that much.)

Part of it has to do with the lack of creative spaces, cheap places to rent, to be able to explore (also known as the point Jane Jacobs made about the need for "a large stock of old buildings" to be present in Great Cities--paid off, with low rents and running costs, to seed innovation) and do things cheaply.

I mean, this is a city where the property management companies ordered office workers to stop putting fun messages using videogame characters on their office windows open out to the street. ("Sticking Together on Vermont Ave.: Post-it Note Art Spreads From Window to Window" from the Washington Post.)

Laura Yao - The Washington Post
How do you think property owner would feel about renting a ground floor corner space at 7th and E Streets NW to guerrilla artists like Banksy (not really a guerrilla anymore) for a temporary installation? Banksy project on the West Bank
At the same time, as nongovernment organizations (Center for Science in the Public Interest, Common Cause, etc.) function more like traditional organizations rather than advocacy groups challenging the system, fewer people more likely to think and act in more challenging ways are likely to come to DC. In short, San Francisco, Berkeley, Austin, and New York City are going to remain centers of alternative idea and art production compared to our fair city.