I am not the only blogger lamenting about inwardness... (regionalism) 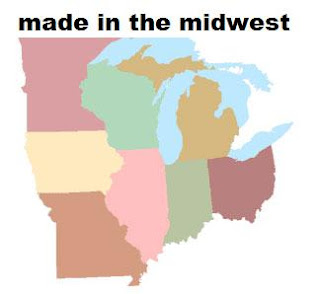 (Image: midwest states as defined by the US Fish and Wildlife Service. I added the header.)
The Planner's Dream Gone Wrong is a blog focused on Chicago and the midwest, and has a number of recent entries on regional provincialism by the states ( "The New Provincials" and Indiana Wants Me (But I Can't Go Back There)*).
I do this kind of laments about DC's inward thinking and embrace of mediocrity, which because the city is the national capital, is branded as something that merits being termed "world class." (e.g., "Chauvinism, mediocrity and robust systems").
I had been wracking my brain, trying to figure out some municipal initiatives that DC has done/is doing that are truly best in class, and except maybe for the local Apps for Democracy thing (which I think are often focused on whiz bang stuff, and not substance anyway) and the DC 5 cent tax on shopping bags, plus in the comments BeyondDC adds bike sharing which is a reasonable addition (although see my response, also in the comments), I couldn't come up with much of anything, other than how the previous director of the Housing Authority significantly revitalized the agency and early initiatives on streetscape/complete streets improvements starting about 10 years ago in Georgetown and then on Barracks Row on 8th Street SE, which predate best practice efforts in places like NYC and San Francisco.
Sure, we are doing streetcar planning, but we have been doing it for 8 years, while in half that time, Seattle not only planned a streetcar line, but built and opened it. Yes, we started great livability/complete streets initiatives, but other communities have since taken these initiatives further. Etc.
He touts Richard Longworth, a former journalist now at the Chicago Council on Global Affairs, who writes the blog Global Midwestern. Longworth authored the book Caught in the Middle: America’s Heartland in the Age of Globalism.
Longworth's entry, "How To Fix the States," is interesting in how he makes the point that abroad, individual state initiatives to attract business or tourism are important, but overseas, the typical country doesn't distinguish much difference between say Wisconsin, Indiana, or Michigan, and that the states would do better to jointly market (and save money, time, and other resources).
He doesn't suggest that they jointly brand themselves as part of such an effort, but that's a no brainer. I know my attempt above image-wise is feeble but hey, I don't have any decent graphics software...
At the level of the metropolitan area, it's not unusual for business attraction efforts to do something like this, such as the "Select Greater Philadelphia" initiative in that region (their logo is pretty pathetic though), the Greater Washington Initiative on Regional Economic Development (better logo) run by the Greater Washington Board of Trade, or the Trade Development Alliance of Greater Seattle.
Although when it's a big thing like a corporate headquarters (e.g., Hilton Hotels or Northrup Grumman) the states get involved, incentive packages get developed, and regional cooperation goes out the window. At the metro level, another discussion of "regionalism" is balancing tax revenue receipts across the region, rather than by individual jurisdiction--which is the point of Growth Machine based competition, to maximize precious property tax revenues through real estate development. Myron Orfield's book Metropolitics is about developing that kind of regionally-linked agenda.
One initiative along these lines is the First Suburbs Consortium, which started in the Cleveland metropolitan area, and the related First Suburbs Development Council, in Cuyahoga County. Of course, neither effort helps Cleveland, the declining center city that is still the heart of the region economically.
And of course, there are the city-county mergers, as has happened in Indianapolis-Marion County, Louisville (KY)-Jefferson County, Lexington (KY)-Fayette County Urban Government, and Nashville-Davidson County (they have one of the nation's best planning directors!).
There's been talk about this for at least 5 years in Pittsburgh and Allegheny County, Pennsylvania.
There is a big push by Governor Christie in New Jersey for consolidation of various small government service districts (see "What's really holding up municipal consolidation" from the North Jersey Herald News, and increasingly in areas that are hard pressed economically, there is a greater consolidation of service operations on the part of small local governments and municipalities such as in Greater Boston or in the Detroit Metropolitan area.
Although as has been discussed here in the past, especially by Christopher, smaller jurisdictions can be more responsive and focused on local concerns.
* yes, I am old enough to remember the song from the radio.