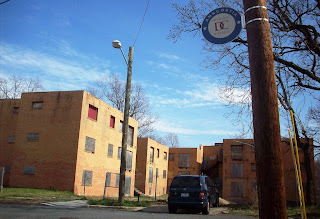 Flickr image of abandoned apartment buildings in Anacostia from Old Anacostia.
Over the past couple weeks, at the Greater Greater Washington blog, John Muller has written a couple of entries, "Ward 8 development founders, may lose $4 million in grants" and "Abandominiums house Anacostia resentment," that are truly provocative, raising points that I have been thinking about since, as he identifies important issues concerning housing policy, especially concerning the relative state of weak submarkets within strong market cities, and the sense of resentment it generates.
The "abandominiums" post covers the fact that in a city with a lot of residential market success, the fact is that the area of the city "East of the River" is full of buildings that are vacant and abandoned, seemingly going nowhere, and are nuisances properties making it that much harder to improve the neighborhood.
1. The easy response is to say "well, that's how the market functions"--because these kinds of properties aren't well constructed, the tenants who tend to rent the properties are "rough" on the properties, and many of the owners lack the financial and management resources necessary to stay on top of the properties, so they fall into neglect and eventually reach the point where the cost of rehabilitating the property exceeds the income-producing value of the property, so it sits until the revenue curve becomes advantageous.
But I wasn't satisfied with that as my initial response (which I wrote along those lines in the comments), because that doesn't do anyone any good, especially residents living with the neglectd day-in and day-out, although yes, the market functions that way across the city (not just in Anacostia), and has for decades--we can all point to properties in various neighborhoods that for various reasons are similarly abandoned and seemingly resistant to improvement.
2. The point is that when the market isn't functioning properly it ought to trigger extra-normal interventions (i.e., government involvement, subsidy, etc.) in order to improve the neighborhood and quality of life for residents.
The question ought to be then, what do we do about it, what is the best package of responses?
3. The abandominium problem indicates a failure in terms of having a wide and deep housing policy, one that provides adequate planning guidance as well as program support and management resources to the private sector as well, across all of the city's submarkets.
While the city has a housing policy and a housing element in the Comprehensive Plan, clearly they aren't enough, or you wouldn't have concentrated abandominium problems.
Every Ward needs a detailed housing policy plan, even though in some wards, the markets are relatively strong, there should still be guidance on how to surgically add housing, accessory dwelling issues, how to add housing in commercial districts, opportunities in underdeveloped areas, vacant properties, and vacant lots.
Ideally such a "comprehensive" plan stays out of the way relatively in the successful areas, and works at making successful those areas where the traditional market isn't working.
4. As an example of the failure of a broader policy is the over-focus on "inclusionary zoning" as the major concern of activists concerned with housing issues.
IZ touches only an itty bitty portion of the housing market--new construction--having minimal impact on the rest of the market. That doesn't mean I am not in favor of IZ, it's just the tip of the iceberg on what should be done, yet it ends up consuming most of people's time and energy on housing policy, ignoring most everything else.
5. Besides having a housing plan for the city which functions at a couple different levels (citywide, public housing, private housing, wards), to solve the abandominium problem specifically requires a focus on the private sector, and three things are needed, monitoring, money (financial assistance), and management development and assistance programs.
6. Monitoring. A comprehensive identification of problems and opportunities needs to occur, with a thumbnail identification of responses for each property. The "Problem Property Audit" from the University of Memphis is one such tool. (Also see "City should create database of problem rental properties" from the Gazette, with regard to Frederick, Maryland.) This vacant lot on the 1400 block of 5th Street NW would be identified in a neighborhood-ward housing plan as an candidate for investigation, as an opportunity for infill housing. 7. Money. DC has limited options, unfortunately, in terms of providing financial support to housing developments, because the height restriction limits property density. One way that IZ is supported is by providing a 20% density increase beyond what normal zoning allows.
DC has a fund called the Housing Production Trust Fund, which is used to support various affordable housing projects. This fund has supported a number of good projects, but the funding source is subject to the vagaries of the market and can be raided by Councilmembers looking for monies to support other priorities.
I think that a similar kind of density bonus above and beyond the 20% for IZ ought to be offered to developers in strong submarkets in the city, and that the revenues generated by this density increase ought to be directed to a fund similar to the Housing Production Trust Fund (the revenues in this fund are generated by the real estate transfer tax) focused on improving the city's weak residential property markets, mostly east of the river. It would be a kind of TDR (transfer of development rights) program, but a portion of the extranormal revenues generated by it would be swept off and directed to activities strengthening the housing market elsewhere in the city.
In any case, we should work more actively to harvest the funds generated by successful areas to use in making less successful areas of the city more successful.
8. Management Development and Assistance to private property owners. Starting with the first program in Pittsburgh, in the 1960s, "neighborhood housing services" programs were created in many cities across the country to address and reverse abandonment and other problems within housing submarkets, to stabilize and improve neighborhoods.
NHS programs generally are more focused on individual property owners, and less so on providing assistance to apartment building owners managing multiple units or multiple properties. These workshops from the Association of Neighborhood and Housing Development in NYC target nonprofits, but could just as easily be offered to micro-property owners and managers (and probably need to be offered at an extremely low cost to get them to participate.)
I think we need a similar kind of program, with what we might call "case managers" or "engagement managers" (that's what people are called in consulting firms) assigned to work with multiunit property owners so that properties remain in good repair, stable, etc., or to get currently vacant properties back online.
Rolf Goetze's Understanding Neighborhood Change (1979) in particular lays out a framework for considering these problems and how to respond.
I have written about aspects of this idea, such as with the apartment building lost to fire in Mount Pleasant ("No matter what you spout off, re/development takes time") and Toronto's "Tower Renewal" program providing assistance to condominium buildings (not unlike various HUD rehabilitation programs) built in the 1960s and 1970s that are now experiencing various problems, need energy upgrades, etc. ("Tower renewal: The Watergate and Southwest DC, and Toronto").
And note, the DC Department of Housing and Community Development does provide assistance to property developers and managers on certain of these aspects. But clearly, more and different assistance needs to be provided, given the prevalence of the problems.
From the Tower Renewal blog:

The Toronto area contains the second largest concentration of high-rise buildings in North America. The bulk of these are aging mid century apartment towers, built throughout the City and its suburbs in the post-war boom.

The Tower Renewal Project is an initiative to re-examine this remarkable heritage, neighbourhood histories, their current place in our city, and their future potential in a green and equitable Toronto.

Key considerations for this multidisciplinary project include decreasing greenhouse gas emissions through building and site retrofit, as well as enabling ‘complete communities’ through the introduction of on-site mixed-use, community services delivery, usable open and recreation space, as well as new retail, housing and employment opportunities. The webpage from the Toronto Tower Renewal blog has dozens of links to articles about their project. This piece from APT Bulletin: Journal of Preservation Technology, is particularly good, "Reassessing the Recent Past: Tower Neighborhood Renewal in Toronto."

The idea is to adopt and adapt this and other approaches to focus on the weak submarket-abandominium problem identified by John Muller.
-----
More and more, I think that plans need to provide more guidance on how local governments should respond to and engage the private sector or other entities. For example, why shouldn't a parks and recreation plan consider nonprofit recreation organizations like the YMCA as well as for profit organizations, and figure out how to create a seamless system of options?
Since most housing is provided by the private sector, if that sector is not succeeding, or isn't succeeding in certain submarkets, dysfunction has significant negative impact on the success and quality of life within neighborhoods, and ought to trigger public involvement.
But it's much better to be pro-active at the outset, by developing wide ranging plans and programs, rather than being reactive and forced to respond once problems have become intractable and hyper-expensive to fix, and a lot more costly to address than if the sector were being monitored and addressed on an ongoing basis.