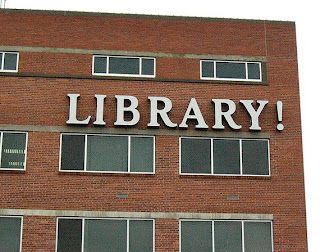 Boise, Idaho takes libraries seriously, judging by their use of the exclamation point in signage.  Image:  Boise Weekly.

In other blog entries, I have argued that the planning scope of "local" planning efforts needs to be expanded to ensure that citizens needs and interests are fully represented, with regard to how other government agencies (federal and/or state), public and private institutions (such as universities, which may be either public or private), and for profit organizations fit into the scope of a particular element of master planning.

For example, parks and recreation plans should cover the gamut of options, including state and federal parks, as well as for profit ventures, recognizing that the "local plan" needs to consider how citizens needs are met in total and how to have proactive plans in place when situations change (e.g., when states closed parks for budget reasons, localities were unprepared because they never expected a state to stop funding its park, which while state run, for all intents and purposes, is a local park).

DC is a special case with regard to what we might call "access to knowledge," because the DC Public Library system and the Central Library especially, are fundamental, but not the only assets available to us, and how might this shape master planning?

In fact, because there are so many specialized and advanced libraries open to me, I don't use DCPL very much at all. I think it's time to make the conceptual leap and develop "local" library plans that address a more  complete picture of citizen "access to knowledge."

I have also written about this in terms of how the Tower Hamlets borough of London has rebranded and repositioned libraries as "Idea Stores."  See "Social Marketing the Arlington (and Tower Hamlets and Baltimore) Way."

Local archives and special collections.  For example, you have archives and historical and cultural functions in addition to the straight up library.  In DCPL, you have a special Peabody Room collection for Georgetown at its public library, along with the Washingtoniana Collection at the Main Library.  Plus the Historical Society of Washington, some new library-museum created by GWU for the public, featuring the Albert Small Collection of materials on Washington.

But the NYPL system has collections on African-American Culture and the Arts.  Many library systems have special health and wellness collections, and government, such as the Dallas Public Library's Urban Information Library.

DC has its own archives.  (Not too accessible with other issues.)  And the Register of Deeds is a repository of great information of historical import, as is the Surveyor's Office (which is part of DCRA).

Because of DC's odd status as a district controlled ultimately by the federal government, various federal agencies have records and archives that are relevant to DC.  For example, the National Park Service (parks, Union Station) and the Army Corp of Engineers (which controls certain parts of the city's water infrastructure) have such records.

And separately from their libraries for students and faculties, universities often have historic archives and records related to the history of the neighborhoods in which they are located.

But that could change.

I use the CUA libraries, especially the Architecture and Engineering Library, quite a bit, and on rare occasions GWU (now that you have to be a friend of the library to get in, and the price has gone up so much, I don't.  I get to the GU library a few times each year.  AU very infrequently. I went to HU's library in December--pretty but didn't have a lot of what I wanted.

Probably the local collections in the Gelman Library will get greater prominence in this new museum that GWU is building.  And fortunately, the Moorland-Spingarn Collection at Howard, which has languished for many years, is getting new attention.

Note also that in San Jose, California, the main library is jointly operated by the local library system and San Jose State University, and residents have access to the university library collection for check out.

But these are issues worth covering in a "local" master plan for libraries and access to knowledge.

But over the years they have cut back on their hours.  And now there are plans to close many of the specialized reading rooms.  (I envy people who work for Congress, because they can check out books.)

The National Archives.  This repository has already cut back on evening and weekend hours.  See the 2006 blog entry, "Archives redux."

Association libraries.  I used to use the library in the higher education associations building on Dupont Circle, when I worked in that area, but I don't so much anymore.  The Foundation Center library is open to the public.  Some associations may provide access to their libraries to the public with an appointment, but there is no master guide to what resources might be available.

This library sector should be covered in a local library master plan.

I have suggested that as part of Central Library planning, DC could even offer co-located space to certain association libraries that serve the public, like the Foundation Center, providing space for free in return for expanded hours.

Federal agency libraries.  The National Library of Medicine is in Bethesda; the National Agriculture Library is in Beltsville (I used it once).  But many federal agencies located in DC have libraries which may be open to the public.  Again, to my knowledge there is no master list.

I used to use the Dept. of Ed. library when it was comparatively easy to access when it was located by Union Station.  Once it moved to SW DC it became very cumbersome to use because it is buried in the building, you have to go through security, a librarian has to come out and get you, etc.  I stopped going.  At its former location, it had a direct entrance.

Note that at the state level, in state capitals, state agency libraries and archives collections should be considered in a similar context as it would relate to local library/knowledge access planning.

National Museum libraries.  The National Gallery of Art has a library, as does the Smithsonian American Art Museum, and the National Library of American History.  Likely so do other institutions.   Many of these libraries are open to researchers.

K-12 school libraries.  Another issue that is important.  Increasingly, school libraries in the city are being de-emphasized, even as some of the private schools enhance their libraries.  Maybe the planning for this function shouldn't be limited to the school system.  Residents in Capitol Hill have used library improvement as a fulcrum to engage residents and revitalize local schools.  See "Has D.C.'s Black Middle Class Given Up on Neighborhood Schools" from the City Paper.

Other public library systems.  In the DC region, with a couple of exceptions, residents can get reciprocity to other area library systems, with the ability to check out books.  It's not well-publicized.  I've even read that you can check a book out of a "foreign" library, and return it to your own library.  This needs to be covered in a "local" library plan also.

Conclusion.  To be "comprehensive" local master planning efforts often ought to be bigger in scope and scale than what we might term "agency functional plans," which for the most part is what "master plans" are, unless they have innovative scopes.

More and more I have come to believe that local plans need to address these kinds of issues as it relates to each element of a comprehensive plan, because otherwise, no one represents the interests of local citizens in relation to other organizations and bodies that also function and offer services within the community.

DC's libraries plan is but one more example of where this concept can be applied.

I'd add the somewhat bizzare new trend of "ebooks lending" by libraries, which Arlington is pushing hard.

Having a catalog system that can automatically get other libraries collections would also be a step.

Meeting space for local groups is also a key necessity. It would be easy to do that in some of the vacant space around.

wrt point 2, worldcat.org, but yes, libraries should have a link to it on their websites/catalogs.

The logical extension of your point would be a regional-interconnected "worldcat", which is what WRLC does with Aladin. (I should have mentioned this.)

Aladin is a combined catalog for the members of the Washington Research Libraries Consortium, which doesn't include UMD, but includes all the colleges in DC plus a few in NoVA including GMU and Marymount.

Apparently the Vancouver, BC main library even has a 10,000? s.f. conference center.

---
years ago I wimped out and didn't apply for a marketing job with DCPL.

One of my ideas was to incorporate amazon book review and book list type functions into the library catalog platform.

Illihois has 9 regional library systems. I grew up in the DuPage Library System. Although the local library has its own board and taxing district, I could borrow books from 132 other libraries. And I didn't even have to go to those libraries, as the books could be delivered to my local library.

It's crazy that you can't look up books from other libraries in DC in 2013. I could do that in the DuPage Library System from my hometown library (pop. 10,000) in 1989. (If not earlier, I just remember it when I started high school.)

Just had a thought. While we're a bit critical here of the lack of consolidated catalog services for the local libraries, I wonder if it is in part because of the three state jurisdictions making it harder.

And those kinds of restrictions aren't quite as present with the universities, most of which are private (UDC and GMU being exceptions).

And I wonder if in more cities with lots of universities, like Boston, NYC, or Baltimore, if there is a WRLC equivalent, and a similar combined catalog system for the libraries?

This is an interesting post about local library planning.
Libraries come in all shapes and sizes. Indeed, hardly any structure ventures are as mind-boggling as a library as far as blended crowd, hardware, and reason.
Visit here-"Online Generic Store"