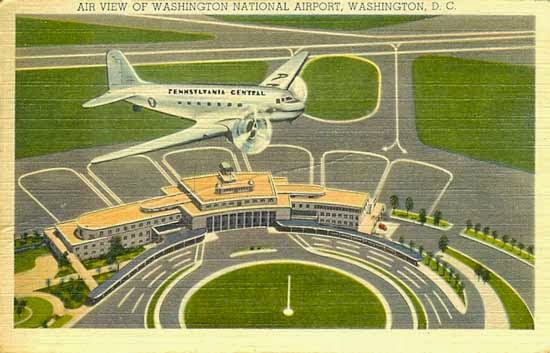 Mike Neibauer of the Washington Business Journal has a couple articles (Loudoun on edge as Dulles domestic travel plummets" and "40 billion reasons why MWAA's success is crucial to the region") about the airports, especially concern in Loudoun County about the decline in passenger traffic at Dulles.

The second article has a link to an economic impact study that the MWAA commissioned, which finds a $40 Billion annual economic impact, which is considerable.

I have some past pieces on the airports, focused more on transportation, but also mentioning that there is a gap in metropolitan and regional planning as it relates to the airports, how the Puget Sound Regional Council produced the Regional Airport Ground Access Plan and a suggestion that the Washington and Baltimore MPOs join together to do a joint airport planning study, using the Puget Sound study as an example.

This piece is about the Silver Line and its real importance, not to connect to the airport, but to reposition Fairfax and Loudoun County real estate for the 21st century:

Airports as hubs of economic activity: the aerotropolis. I wrote about aerotropoli here, "Aerotropoli and rethinking the scale of global mobility," and a recent Urbanophile piece on Brazil ("Is Brazil Still the Country of the Future?") makes the point that Brazil is poorly situated in terms of being a hub for global travel, especially to Asia, since the country is on the east side of South America.

Related to the new scale of airplane networks, the New York Times veas a piece on the massive airport at Dubai ("Dubai, Once a Humble Refueling Stop, Is Crossroad to the Globe."

Airport design.  I came across a book on the creation of airports and airport design, called Naked Airports, and there has been many stories about how well-funded airlines in the Mideast, such as Emirates Airlines and Etihad Airlines and their creating international airlines networks by buying portions of otherwise funding-challenged companies ("Etihad's Network of Ailing Airlines Takes on Emirates," Businessweek).

And just this weekend, I came across a copy of a book on the history of airport design, called Naked Airports.  It's not scintillating, but it is interesting, although so far it is more about the early history of the development of airlines.  It does point out how European cities and nations figured out before the US that airports were "national" and regional "gateways," and so they treated airports with a greater level of design respect as a result.

Also, at first, there was the desire to make the airports majestic to ease people's concern about the potential danger of flying.  On the other hand, after people flew a few times, this was less of an issue, and so it became less of an issue as it related to the design of airports.

While some people wanted a light rail station directtly at the airport, comparable to how fixed rail transit service is provided to airports such as Baltimore, Chicago, Minneapolis, Philadelphia, Portland, Seattle, and Washington (among others), there was concern that tunneling would have created problems for the terminals and runways and that a single light rail station couldn't serve all nine of the airport's terminals. 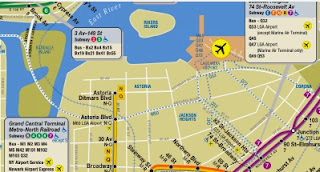 Why isn't LaGuardia Airport in Queens served by an extension of the N/Q subway? It doesn't make sense to me that the subway hassn't been extended to serve LaGuardia (see "Revisiting an N train extension to Laguardia," Second Ave. Sagas) in New York City.

It's less than three miles from the end of the line to the Airport.

Or why there isn't a night bus to DCA?

All good points, two paragraphs in "Airport Design" may be a bit of a typo?

You can look at the "failure" of Dulles as a validation that the urbanism thesis won over cheap land. As you said there is a lot of airline industry and the desire for hubbing in the US.

The international aspect is something that almost everyone misses here; i.e the persians, ethoipians, arabs that add some variety to the immigrant mix. Not to mention the world bank/embasy crowd. I'd frame Dulles not as a failure from hubbing or cargo, but asking why it hasn't taken off as an interernational airport.

MWAA may have the best "design" with DCA and dulles but security and the industry quickly made both of them unwieldy. I'd still say Detroit as the best airport in the US.

Who is calling Dulles a failure?

It's a top-10 airport for international traffic in the US: http://www.dot.gov/sites/dot.gov/files/docs/US%20International%20Air%20Passenger%20and%20Freight%20Statistics%20Report%20for%20December%202013.pdf

The big three are JFK, MIA, and LAX. Then EWR, ORD, ATL, SFO, IAH and IAD. It's got more international traffic than DFW, and far more than BOS, PHL, SEA, DTW, MSP, etc.

With nearly 7 million annual international passengers, it's worth remembering that most of those are local origins and destinations - only about 2 million are connections. And the international traffic at Dulles has done nothing but grow, even while domestic traffic is stagnant or declining.

Shrinking domestic traffic at Dulles has more to do with the problems facing United Airlines than it does with anything intrinsic about the airport or the market itself.

It's a failure in there is a lot of hang-wringing about it. I'd agree that as an international destination it is working, but that isn't being connected to a domestic network.

Re: LaGuardia ... Because NIMBYs in Queens have repeatedly blocked any attempts. There have been many plans since the early 90s to do just that but since the train would have to be elevated those neighbors to the north have successfully blocked the discussion. It's enough neighbors in a politically connected part of town to prevent anything from getting done. Either because of the city council or because of Albany. Either one can delay or derail these kinds of improvements, especially if the area (like Astoria) is relatively well off and politically moderate. Those votes are too precious to the Powers That Be. (See Staten Island for similar outsized powerbrokering.)

re charlie and alex b's comments -- I think I was more channeling the idea of "all the complaining" about lack of success wrt Dulles.

It's utilitarian (not design in terms of function) and has lots of traffic because of its location, as charlie pointed out.

OTOH, you don't have the aerotropolis kind of effect. The development that's out there is more an effect of the DOD/NoVA economy, less re the airport.

And I think Alex is right to point out passenger declines deriving from United and their business. (Remember the brief "Presidential Airways" line, if it had been successful that would have changed the airport in terms of passenger statistics and footprint of service.)

wrt design, I agree about Dulles and National Airport having decent designs (when I first came here I was so enamored of the steel panels and lilac neon in the old terminal at National).

... the night buses issue I dealt with in those earlier blog entries.

2. will check out the florida piece, saw some articles about that initiative recently.

wrt Christopher's comments... interesting thing in Takoma last week. At the WMATA hearing on developing at the Takoma metro, the Marylanders were out in force, especially the politicians. They read a letter into the record from the Congressman suggesting a particular course of action and implications about the relationship with the FTA and WMATA funding...

The thing that the proponents of a smaller project are advocating for is a design committee. The developer is concerned that a design committee would be stacked with people who are basically opponents, and their ability to develop much of anything would be severely compromised.

The "opponents" keep harking on various things. I probably will write about it. It's a continuation of the micro learning about planning that the development has afforded me.

The Marylanders do have a point about access to the decision making process, which because the site is in DC, they normally wouldn't.

... anyway, in DC proper we have the issue when people try to get Federal involvement in local issues, but not so much "state" representatives or Congresspeople.

Although sometimes the elected officials in DC will punt on this because they don't want to be placed in the position of being able to make a controversial decision (like the height limit).