Updated: Another example that school bus-based transportation is increasingly unsustainable 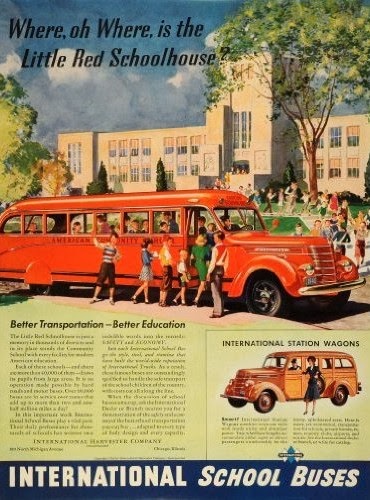 ========
A query about the number used below, of "an average of $500 per student for annual bus transportation," which was a quote from the Indianapolis Star article, led me to make a more detailed inquiry.

According to the National Center for Education Statistics, the national average cost for bus transportation for one student in one year is $871, with data from 2009-2010, which is the most recent year available.
=========


One of the problems with moving away from a neighborhood-based elementary school planning and development paradigm is that school systems become dependent on buses for transporting students to school.

This is problematic for many reasons, including health and wellness--which has triggered the "Safe Routes to School" initiative.

But it's also problematic financially, especially as local government budgets become increasingly hard pressed, as communities reach the ceiling of what they can charge for property and other taxes. According to various studies, it typically costs at least $500 per year to bus one student to and from school.

During the recession, more school districts began enforcing regulations concerning access to bus transportation--with some exceptions, most districts won't provide bus service for students living within one mile of a school--and increasing the distance from school before bus transportation would be provided.

Missed in the discussion is how school systems developed on the sprawl land use paradigm end up being financially crushed by the financial implication--dependent on school buses, diesel gasoline, and drivers.

Buses need to be replaced at the end of their useful life, energy costs continually increase (with a current respite), and it becomes increasingly difficult for school systems to recruit and retain enough bus drivers, given the split shifts and difficulties inherent in the work.

I'd frame this as urban district have an opportunity to reduce transport costs compared to suburban districts.

But as these costs are not obvious, they aren't really addresses and are part of the fat in the system.

There are other costs -- in DC having high schools students on metro is a bad idea and contributes to problems like the gangs at Verizon center.


But a better tuned system (free metro fare to from school, but not free use of system) would help.

The hostility of much of american towards transit is rooted in bad memories of taking the bus to school.

Unfortunately with neighborhood schools you have other problems which didn't exist 50 years ago. Even in dense cities like San Francisco, widely considered California's best urban school district, they have neighborhood preferences instead of neighborhood schools, for good reason - they try to ensure economic diversity by not concentrating poor kids in poor neighborhoods (because otherwise they have fewer role models for good behavior), there are plenty of immersion programs for different languages and special focus programs on art, technology, science, etc. While some people go to their neighborhood school, there is no property right inherent in going to a good public school in The City.

In suburban areas, larger elementary schools are often preferred not just for consolidation of facilities, but also to accomodate different programs. If 10% of a student population is gifted and talented, for example, you can do a lot more with a 700 person elementary school than one a third of the size - indeed, many GATE kids spent several days a month shuttling to and from programs in districts which have smaller elementary schools.

I get why the SRTS and walkability crowd like neighborhood schools, because they encourage physical actiivty. On the other hand, I also want to balance racial and economic diversity and availability of diverse programs, which draw me away from neighborhood schools. The real issue is sprawl, as San Franciscans can take their kids to school a few miles away with less driving than someone in another city, and have more choices within biking distance than someone in the suburbs.

charlie -- yes, but if the schools are problematic you lose the advantage, e.g., DC. People all want to go to schools west of the park, forcing many to drive.

But yes, sort of like how now "we" don't benefit from the fall in gasoline prices, but we've been benefiting all along by not being automobile-dependent.

So if the people now are "saving " $120 per 10 cent reduction in gas prices, then we have been enjoying that additional punch to our consumer spending for awhile, urban districts have been "saving" money by not having to use school buses.

OTOH, we spend scads of money on special ed. transportation.

WRT your other point, I must be an outlier, I never minded riding the bus, even for a year just after Pontiac Schools started busing, in 1972... but yes, riding the school bus is referred to as the "loser cruiser" in writings I've seen.

calwatch -- good points. Theoretically, as you point out, the relative compactness of a city allows for specialization across the "school network" in a manner that can be consumed with minimal transportation expenditure.

I see a lot more biking to school in my neighborhood (Upper DC) and in Capitol Hill and to Brookland via the Metrpolitan Branch Trail when I go about the city. (I don't frequent other areas of the city much during the school day so I don't have a sense what the state of getting to school is like in areas like Dupont Circle, Columbia Heights, Georgetown, Friendship Heights, Chevy Chase, etc.)

But my general point about rearticulating planning around neighborhood schools I've written about before.

I think with a network of quality urban schools you can get the SES diversity effects you want. The key is to have quality schools, which we have been bereft of generally, for awhile.

Oops, forgot to respond to charlie's point about hooligan kids and transit. Yes, my understanding is that from time to time there are problems with "the scholars" at Wilson HS and the Tenleytown Metro, and I keep forgetting to blog an October twitter photo of a student takeover of a Metrobus at Bladensburg and H St. NE "after school."

You could set time constraints on use of subsidized student transit benefits if they were only used by the SmarTrip for sure. Probably you could do it on the paper/plastic pass tickets too.

They are "tuned" to only provide trips within DC.

Urbanists need to also be careful about falling into a trap when talking about "neighborhood schools" since in some places, minorities feel that's a code word for resegregation, as what happened in Wake County, North Carolina. Republicans took power of the school board calling for a return to "neighborhood schools" which just enforces existing social and racial segregation. http://www.csmonitor.com/USA/Education/2010/0324/Busing-to-end-in-Wake-County-N.C.-Goodbye-school-diversity

if you read my cited piece, you'd know where I am coming from. Also see the piece from Friday? on my 11 year old arts cluster proposal.

For me, the idea isn't so much "neighborhood" schools in order to segregate, although yes, it's true that more DC neighborhoods are now more white, the fact is that 70% or more of the student population in DC is minority.

The point is to maintain quality schools as neighborhood civic assets and anchors.

So as the "neighborhood schools" get converted to charters, the connection to the neighborhood gets lost, mostly, with some exceptions.

e.g., the Capital City PCS one block from my house does amazing outreach to the neighborhood, even though they are not required to do so at all.

Meanwhile the traditional public elementary and high schools, each 5 blocks away from us, do almost zero outreach.

P.S. this urbanist has been writing about schools for a couple decades.

this piece is from early last week, on the arts cluster concept I proposed for the greater H St. neighborhood.

thanks too for the reminder about Raleigh/NC. I had forgotten about that, haven't kept up with whether or not the General is still there...

2. cf. Memphis, the way the city forced the merger of the city and county school districts, but then how some of the "county" jurisdictions are now creating their own, separate school districts.