Who knew?: there is a Winter Cycling Federation and annual conference

Big biking cities like Minneapolis and Montreal work to support year-round cycling, despite winter conditions which bring a lot of snow.

For example, Minneapolis' bike master plans have sections on maintenance, including during winter conditions--with 24-hour snow clearance from major bikeways, while a couple years ago, Montreal designated a primary winter bike lane network, the Reseau Blanc, with commitments for expeditious snow clearance.

But these cities are exceptional.  Despite the focus of many cities on sustainable mobility, the commitment hasn't translated into thinking and acting differently as it relates to maintaining facilities in all weather and visibility conditions ("Night-time safety: rethinking lighting in the context of a walking community"). 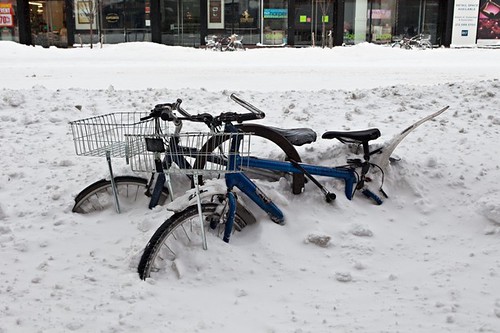 Bikes are buried underneath a pile of snow on Columbus Avenue on December 27, 2010 in New York City. A blizzard pounded the East Coast of the United States delivering 20 inches of snow to New York City while snarling post-Christmas travel.  (Photo by Andrew Burton/Getty Images)

As winter approaches each year, I tend to write a couple features on the topic of snow clearance, but more toward the idea of how planning and implementing sustainable mobility practices needs to be a 24/7/365 activity, not only for rush hour or great weather. 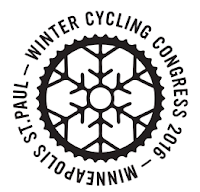 This year, the Congress was in Leeuwarden, The Netherlands, and next year, from February 2nd-4th, 2016, it will be in Minneapolis, the first time the event will be held in the US.