The footbridge from the Mong Kok transit station does not connect directly to the building at 700 Nathan Road, Kowloon, Hong Kong.

There is an op-ed ("Ministry of silly walks: Hong Kong officials are shirking their responsibility to make crowded Mong Kok a better place for pedestrians") in the South China Morning Post about failures by the government in developing better links in the pedestrian network between private and public spaces.  It's by Paul Zimmerman, a city councilor and director of Designing Hong Kong, a nonprofit advocacy group focused on land use, urban design, and transportation matters, 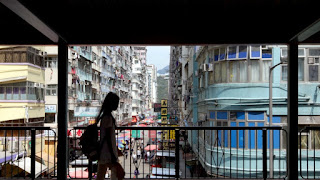 The specific example concerned barriers to improved pedestrian mobility as a result of urban design flaws within and between a particular building and a train station and the street network, where an above-ground walkway doesn't continue into a building, forcing pedestrians getting to their final destination to go down to the street to enter the building, or out of the building to get to the walkway to the transit  station.

The building is for sale by its owner, the Government of Hong Kong, and the author suggests that the sales agreement for the building should have included requirements for the improvements. From the article:


In our campaign to improve walkability, our latest encounter ... is over the sale of the Trade and Industry Department Tower, formerly known as Argyle Centre Tower II, on Nathan Road in Mong Kok. It is a 1980s building owned by the government. The tender for its sale closes on January 8. We have asked for it to include terms which oblige the buyer to internalise the links to Mong Kok MTR station and the Mong Kok Road footbridge. These stairs and escalators currently obstruct pavements and roads surrounding the building.

Removing these structures from the adjacent pavements and roads would improve pedestrian and vehicular circulation at street level. Moreover, linking the footbridge with a new Argyle Street footbridge via the Argyle Centre Towers is a critical piece of the puzzle the government has been struggling with: the creation of a comprehensive elevated pedestrian network desperately needed to alleviate the overcrowding of Mong Kok’s streets.

The sale of the building is a one-off opportunity to improve walkability. If we fail to spell out these requirements in the tender, it will be hard to convince the buyer to give up gross floor area later to invest in the works. 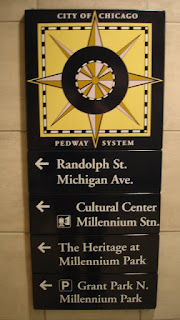 Reading the article, even though the city's area and transportation plans include elements for improving pedestrian mobility including above-ground footbridges and below ground tunnels (they call them subways) it occurs to me that unlike cities such as Chicago (Pedway), Minneapolis (Skyway), Montreal (Underground/RESO-La Ville Souterraine), and Toronto (PATH), Hong Kong hasn't defined an enhanced, comprehensive, and integrated pedestrian mobility network, even though it has plenty of underground and above-ground pedestrian walkways and connections between buildings and transit stations, utilizing both public and private space.

(Note that there are many more examples of such mobility networks, mostly underground, most of which I am completely unfamiliar with, but are helpfully listed on the Wikipedia Underground City page.) 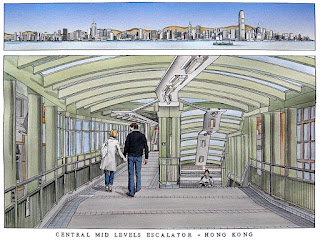 The foundation of the issue raised by the op-ed, better integration of pedestrian linkages between the Mong Tok MTR station and the Argyle Towers building and using the sale of the building as a way to facilitate and force the changes, isn't so much "a one-off opportunity" but an indicator of the need for a more comprehensive and integrated approach.

It's also a common problem with the utilization/sale of public assets, when governments sell properties they are loathe to put in a lot of conditions, believing it will reduce the net proceeds or scare off potential buyers, rather than consider the long term benefits of achieving a broader set of objectives.  Myself, I'd be happy with a lot less money in return if the project yielded significant public good benefits in terms of urban design, placemaking, community improvement, and civic architecture. 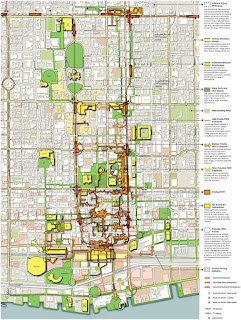 Hong Kong needs to organize and define its current collection of disparate pedestrian infrastructure elements into a formalized system, and brand, market, and plan it, including better ways for identifying gaps and addressing potential improvements within the network, just as Toronto has done in its most recent PATH Master Plan (image at right).

This particular section proposed the creation of a formalized off-street pedestrian network, both underground and above-ground (not so much skyways as mezzanines and second floors of office buildings) using public and private spaces.

It defines the "Access Tree" linking horizontal and vertical pedestrian movement between underground train stations, streets and sidewalks, and (primarily office) buildings.  It defines the train stations and platforms as "the roots," of the system, elevators (and ramps, sidewalks, and escalators) as the "trunks," and sidewalks and office building (lobbies and) corridors as "branches."  The tree connects to buildings through "mixing chambers" at the street level, around which are clustered the tallest buildings, which are located close to high capacity transit.  (See excerpts below.)

Very very dense cities like Hong Kong, New York, and London need such formalized approaches and plans.  As do even smaller cities with underground transit systems. 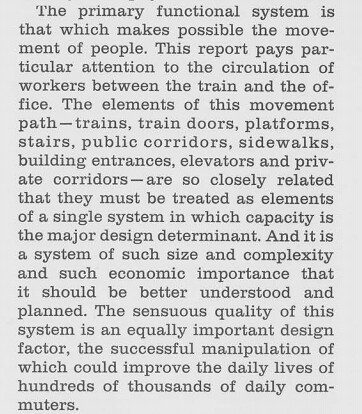 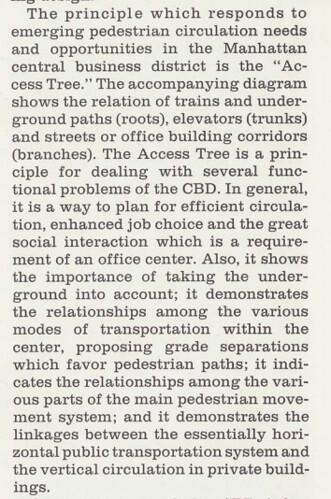 Hong Kong has a lot of really horribly bad 1950's- thru 80's nasty modernist building stock- so does Tokyo- friends in Tokyo complained to me of how ugly some of the modernist buildings are and how depressing it makes the cityscape. Hong Kong has lovely mountain scenery that offsets some of this apathetic architectural treatment and it also has some nice colonial era structures but much of the last 50 years has seen awful buildings in that city.

This website is really epic. I got stuck with my essay writing when I do my assignment. Then, it came to rescue
https://hong-kong.writemyessay.biz/writing-a-memorable-essay-hong-kong/. Simply magical!