Park People is an advocacy group for parks and open space matters in Toronto.  They have just released a report, Thriving Places, about how 21st century parks need to have more than some green space and athletic fields. 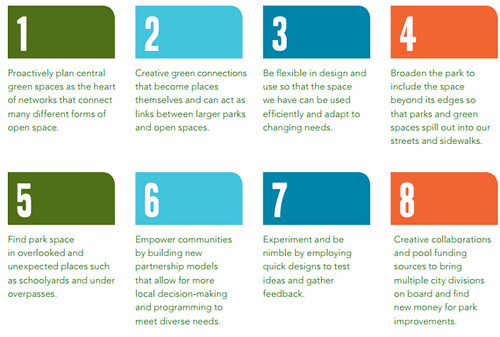 I think that's a good approach, because local officials and stakeholders tend to have a hard time grappling with examples that are far afield. But I think the local challenge is to move from one-off examples of best practice and somehow systematize the learning and "bake it into planning, standard operating procedures, and processes going forward."


Urban parks need more than a bit of green space and some dedicated sport facilities to meet the needs of residents who lack their own private outdoor spaces, the report says. The parks highlighted in the report support a wide variety of uses, including farmers’ markets, movie nights, community barbecues, outdoor yoga classes and cultural festivals.

The challenge, according to Garrett, is finding space for all those uses in small or unlikely locations. The report cites a number of linear parks planted along transit corridors and streets that can allow for such diverse programming. “We should be looking at our public streets as a resource for public space,” Garrett said.

According to the article, the report also makes the point that park spaces need to be community-engaged:


Garrett said the design and planning is a vital starting point, but a successful park will need community driven programming too.  "A park is more than just its design,” he said. “It's the people that use the space.” 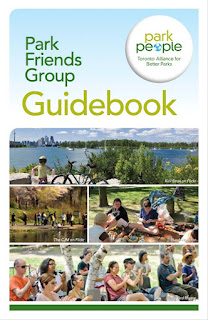 To that end, a couple years ago Park People published six manuals to provide self-help guidance to community groups and citizens interested in being more engaged with their parks.

Like the Park Pride group in Atlanta, Park People also holds an annual parks summit for Toronto's park supporters.  It's to introduce people to best practices featuring talks by leading practitioners, bring people together to network, and to build the skill base and capacity of activists to do even better going forward.