Austin passed legislation imposing rules on e-taxi services like Uber and Lyft that are comparable to the regulations followed by regular taxi services.  Uber and similar companies funded a referendum to overturn the rules.  From the Austin American-Statesman article, "Prop 1 goes down as activist proclaims: ‘Austin made Uber an example'":


The results keep in place the ordinance that the City Council approved in December, which requires drivers with ride-hailing apps to undergo fingerprint-based background checks by Feb. 1, 2017. The city’s ordinance also prohibits drivers from stopping in traffic lanes for passenger dropoffs and pickups, requires “trade dress” to identify vehicles for hire, and imposes a variety of data reporting requirements on the ride-hailing companies.

The problem with "sharing" services like airbnb and Uber isn't that they are ways to monetize slack resources, it's that they try to do it market by market in ways that undercut for profit services engaged in the same industry.  They are seeking special privileges to undercut existing businesses, rather than seeking to compete "on a level playing field."  This has absolutely nothing to do with e-commerce and that the are e-based platform and not "brick and mortar" businesses provides no justification for getting to play by different rules. 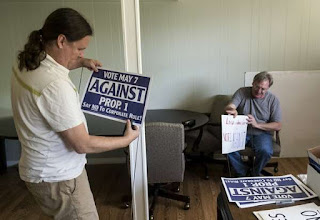 I have no problem with vacation rental e-commerce platforms like Airbnb--although we don't use it, we do use VRBO. But it seems reasonable that properties participating, even if renting a spare room as opposed to a full unit or apartment (the type of property we prefer to rent ourselves) that users pay the same lodging taxes that visitors pay when staying in a hotel.

Similarly, with taxi services, for the most part, the demand for taxis is met by available service, with some exceptions, service to impoverished areas, but the reality is that services like Uber aren't much better at serving these areas either, although the way the service is structured, with a kind of prepayment helps to ward off some of the problems taxi drivers often experience taking or picking up fares in such areas.

But the only reason Uber can charge below taxi rates is because pricing is subsidized by capital investment and most of the real costs are borne by the drivers. And drivers, like taxi drivers, mostly take such jobs out of desperation not out of choice, so they will continue to drive even in the face of declining revenues.

In any case, why shouldn't e-taxi service providers be required to meet the same standards as traditional taxi services

Like Airbnb's successful opposition to a referendum-proposed change in San Francisco's regulations, which would have further limited the number of days someone could rent their property in a calendar year, and the company's aim to create political support organizations across the country ("Airbnb flexes new political muscle with plans for 100 home-sharing clubs," USA Today), Uber and Lyft wanted to defeat Austin's legislation to put on notice other communities, exactly how Walmart browbeated San Diego and other cities by threatening to overturn through referendum the city's legislation calling for mitigation of Walmart's negative effect on local business districts and businesses.  Rather than pay for the cost of a special election, the City Council capitulated ("City Council Votes To Repeal Big-Box Ordinance," San Diego Channel 10).

Instead, in Austin these companies lost, despite spending 50 times the amount of the community effort organized to keep the legislation in place.  From the Statesman article:


Uber and Lyft opened the money gusher in Austin as they attempt to beat back similar regulations in major cities across the country, including Chicago, Los Angeles and Atlanta. The giant sums left many observers convinced the companies were using the Austin referendum to send a message to those cities and others that might be eyeing tougher rules.

Ratcheting up the pressure further, Uber recently threatened to leave Houston, which requires drivers to be fingerprinted, drug-tested and undergo a physical before they can drive for the service — requirements far beyond those imposed by the Austin City Council in its December ordinance that Prop 1 would have overturned. Lyft does not operate in Houston.

“They’re operating at a much bigger scale than Prop 1 in Austin,” James Henson, the director of the Texas Politics Project at the University of Texas at Austin, recently told the American-Statesman. “This is not just about Austin, this is about how they assert themselves in regulatory markets in every market they’re in.

Especially because the companies are seeking to overturn local regulation through the passage of more favorable legislation at the state level.

"Level playing field" is as strong a sound bite and justification as "free market" or "competition."  It's not competition if you're asking for special privileges.

I forgot to mention that Uber and Lyft made public and followed through with their threat to leave the market as a result of the citizen vote.

They likely believe a "libertarian like" outcry on the part of citizens in favor of their staying.

But there's no reason to not see see the Uber/Lyft action as bullying.

But the regulatory requirements aren't onerous, and protect the public interest.

"Protect the public interest", "level playing field," "competition, not special treatment" are the messages that the pro-regulation forces need to reiterate.