2019 (US) National Travel and Tourism Week: A visitor centers agenda for DC

A big issue for me when it comes to tourism is visitor centers, which help to orient visitors and can introduce them to places to visit that they might not know about or hadn't considered.

Because DC's tourism offer doesn't include a "real" visitor center, I have become particularly interested in this.

I make a point of checking out such facilities when I travel, and I jokingly call them "best practice learning centers" depending on the range and quality of the information provided by the various cities, counties, towns, and historic sites--you can pick up tons of information in one fell swoop.

(It took me years to figure out that I should file this stuff by state...  and now I need to go back and create sub-files for transit, historic preservation, arts, etc.)

Although note that there are various federal visitor centers in the city, for the Smithsonian Museums, the US Capitol, and various National Park Service sites, such as the White House Visitor Center.

But in DC at least, with a couple of small exceptions, these centers refuse to provide non-federal information, like about "the area" beyond the federal site, which defeats the theoretical purpose of such centers.

By contrast, the State of Maryland is particularly good, and besides providing a network of centers run by the state tourism agency, which is a unit of the Department of Economic Development, they support local centers in cities and counties around the state.  (Pennsylvania is another example.)

A shift to digital.  Unfortunately, many visitor centers across the country are shifting away from providing printed information, towards digital information.  But screens can usually only serve one person at a time, and don't usually have the same ability to deliver a message to someone not necessarily looking for it.

Obviously, digital works particularly well for the pre-planning phase of trips.  But it's not enough for the visiting phase.  You need printed (analog) materials too, to trigger additional visits (spending), although digital is a key element of trip experiencing also.

8 stages of travel
(this is modified from other publications, listing five or six stages.  I argue they miss a couple steps.)

A great visitor center in Hyattsville.  It happens that one of the best "locally provided" visitor centers on the DC/Maryland side is in Hyattsville, Maryland, where the Anacostia Trails Heritage Area (calling itself "Maryland Milestones") has a visitor center as part of the Pyramid Atlantic Art Center in the Gateway Arts District, which is one of the state's designated arts and entertainment districts. 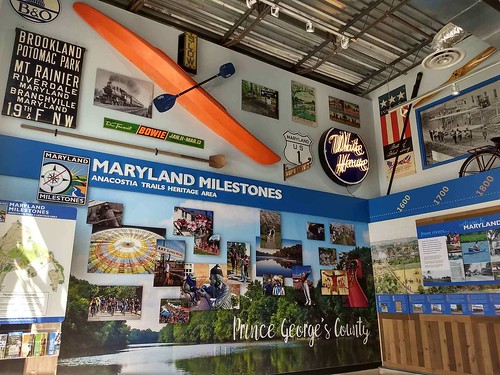 It's not staffed--at least I've never been there when it's staffed--but it's open when the Pyramid Atlantic Art Center is open, and that means til 9pm Tuesday-Thursday and til 6pm on Friday and Saturday, much longer hours than a typical visitor center.

It has a wide variety of travel-related brochures, including a series of thematic brochures promoting visitation in the ATHA heritage area, as well as images and artifacts from the area, and a historic timeline display on one wall. 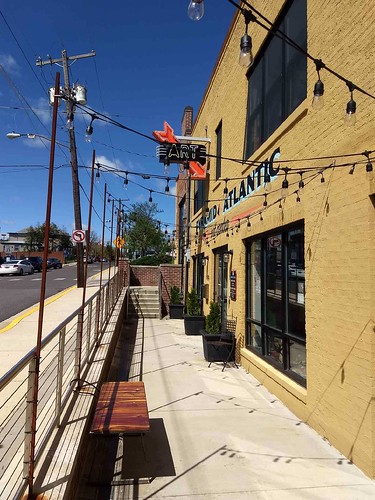 The Pyramid Atlantic Arts Center has become the foundational anchor for the Gateway Arts District overall, and especially for the node in Hyattsville, which is finally beginning to achieve critical mass.

Besides the various programs around book and paper arts, studios, an arts library, and a gallery, the Pyramid Atlantic Art Center also includes the visitor center, as well as offices for ATHA and the Neighborhood Design Center.

(It's a model example of the kind of multifaceted arts centers that I argue ought to be created in DC.)

Alexandria, Virginia.  On the Virginia side, the longstanding Alexandria Visitor Center is another exemplary example.  It's highly visible, located on King Street near the Waterfront, and it serves as the staging point for walking and bus tours. 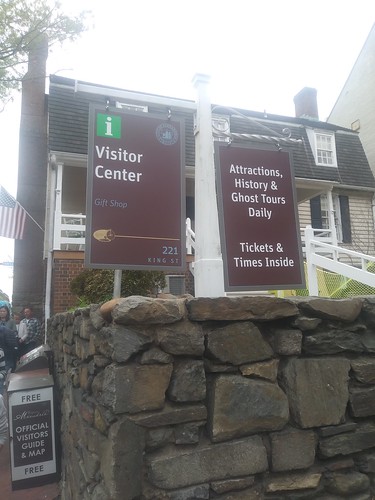 It stands out too because while most visitor centers close at 5pm, during the high season from April to September, on Thursdays, Fridays, and Saturdays they stay open til 8pm.

1.  DC should create a high quality primary and premiere visitor center.  I suggest it be located at Union Station.

(There's a kiosk info center on the level serving inter-city buses too, but it isn't well serviced, and mostly relies on a hotel-focused digital marketing screen to provide information.)

Given that millions of people visit DC each year, it's a travesty that such a center doesn't exist.  Baltimore's City Visitor Center on the Inner Harbor is a good example of what could be done in terms of providing a high quality operation.

2.  DC should support the provision of secondary visitor centers in districts of the city popular with tourists, such as Capitol Hill, Dupont Circle, and Georgetown.  A visitor center could also be built into the underground entranceway of the Smithsonian Metrorail Station.  (Portland, Oregon does something similar in Pioneer Courthouse Square.) 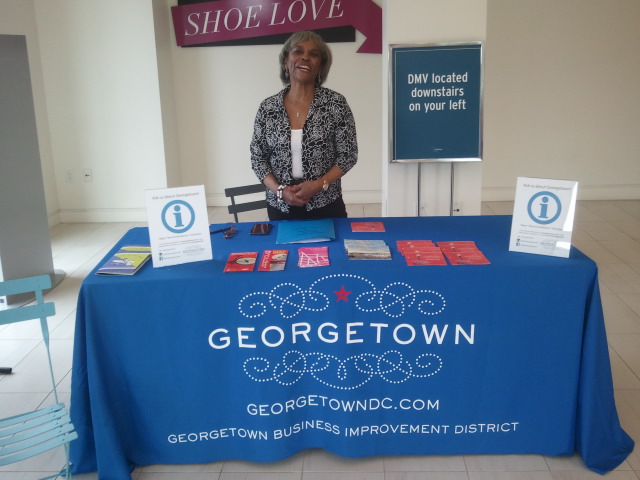 In 2015, the Georgetown BID piloted a pop up visitor center, but they weren't able to develop the momentum to create a standalone center.

Cities like Montreal and New York City and Miami-Dade County, Florida have a system for doing this.

3.  These centers should be open on an extended hour schedule as appropriate. 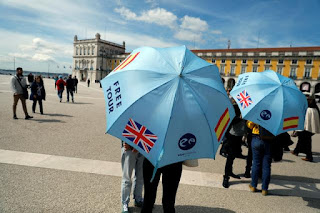 4.  Visitor centers should serve as staging points for tours of the city and sub-districts of the city.  Which means developing a more robust set of such programming.  There are a variety of tours, some by nonprofits, some by for profits.  But there are gaps in what's offered and no common set of staging points. 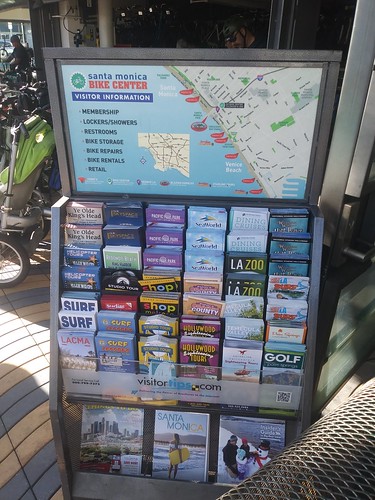 5.  DC should support the development of marketing materials for sub-districts of the city and other attractions (such as Eastern Market), as well as a system of tourism marketing kiosks at various locations including hotels, the Central Library, etc.

(One of the staffed visitor centers in Liverpool is at the Central Library.)

6.  DC should work with the federal visitor centers to facilitate the provision of local information to visiting tourists.

7.  The National Park Service should create one or more "master visitor centers" providing orientation and other services for all of the parks in the Washington region, as well as in Maryland and Virginia. 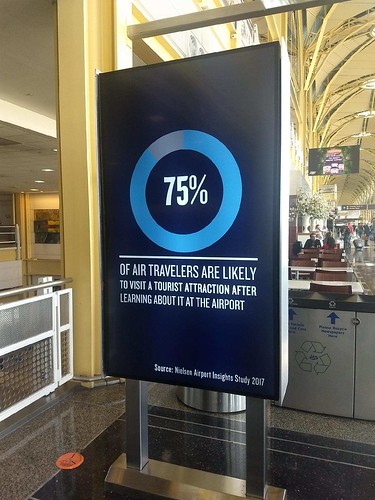 According to this promotional ad on a kiosk at National Airport, 75% of travelers will visit attractions that they learn about at the airport.  But there isn't really a visitor center at the area's airports.  There are help desks that happen to have a few pieces of information for visitors.

8.  Working with suburban tourism marketing organizations, a system of tourism visitor centers should be created for the region's three airports: Washington National Airport; Dulles Airport--both in Virginia; and the BWI Airport in Maryland.

The reality is that most of the patrons of these centers are primarily interested in DC, but outside of the airports and certain Maryland visitor centers along I-95 and US 301, DC charges for information, meaning that most underfunded suburban centers choose not to display DC-related materials.

10.  The area transit system should add enhanced visitor information displays to key stations experiencing a great deal of visitor use. 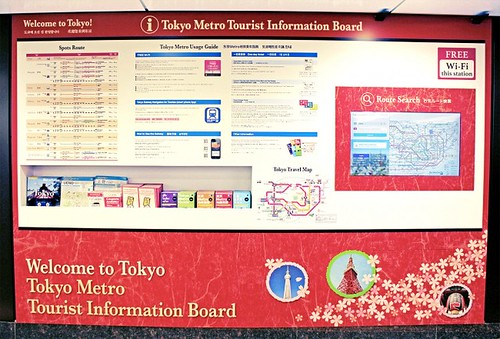 In the DC area Metrorail system, in DC, stations at Union Station, Metro Center, Gallery Place, probably Foggy Bottom, Eastern Market, Capitol South, Dupont Circle, L'Enfant Plaza (which should be repositioned as providing access to the National Mall), and Smithsonian should get such treatments, along with National Airport and the future Dulles Airport station in Virginia.

The City of Alexandria would probably want this information placed at the King Street Station.  And probably the Navy Yard station in DC, which serves the Washington Nationals baseball stadium, and to some extent the new Audi Field soccer stadium, should get this treatment too.

Note that the new Stone Oak Park and Ride Transit Center in the San Antonio VIA Transit system does something similar to that of the Tokyo Metro System, making over an entire interior wall as a wayfinding guide to the system. 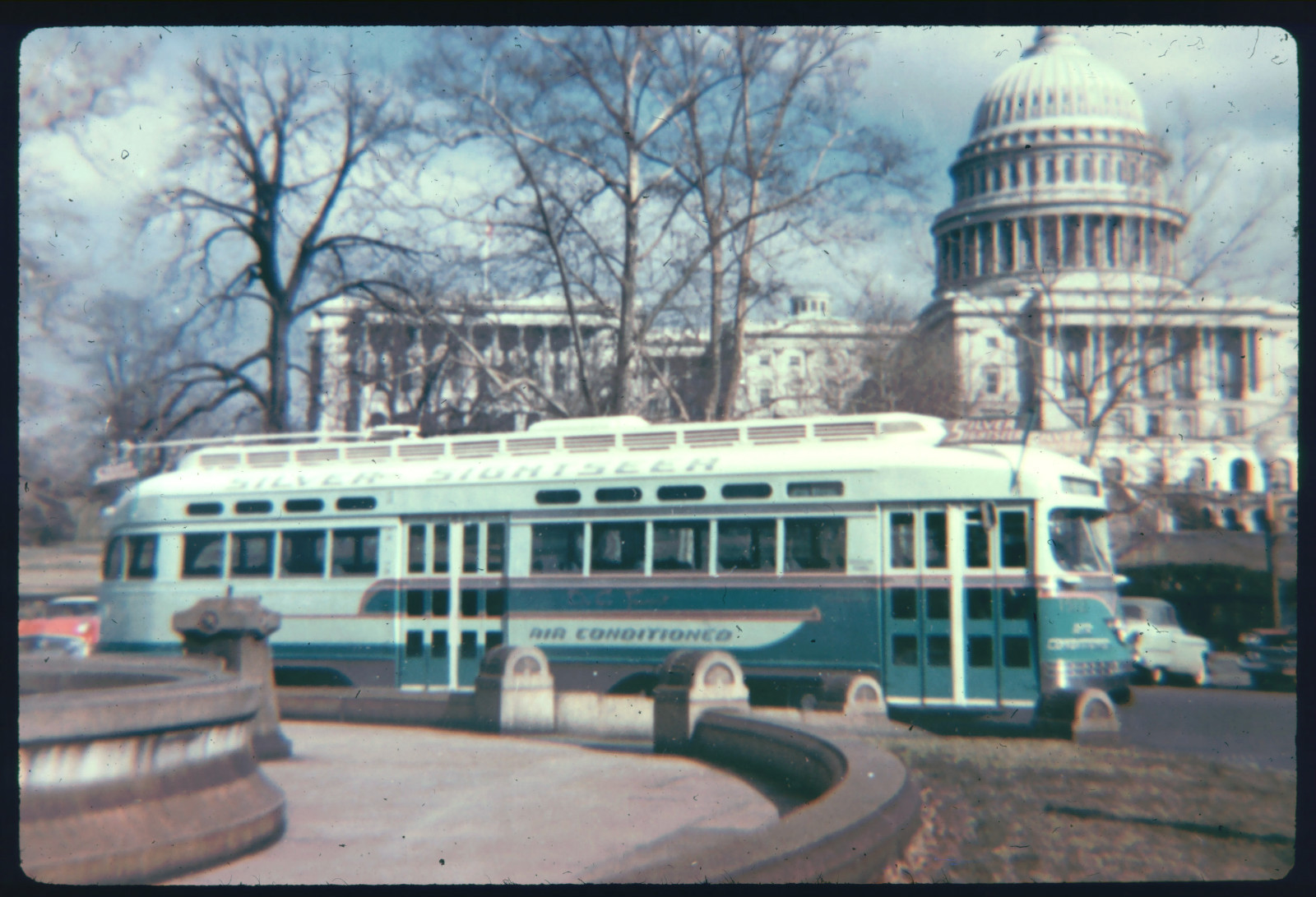 This is discussed in past entries:

-- "New DC Circulator route serving National Mall reminds us that we are neglecting connections from west to east and fail to adequately connect Georgetown to the National Mall," 2015
-- "A National Mall-focused heritage (replica) streetcar service to serve visitors is way bigger idea than a parking garage under the Mall," 2013

and (1) uses the example of the San Francisco F Line streetcars; (2) the National Mall Coalition's recommendation that a visitor parking structure be built under the National Mall; and (3) adds visitor centers to the mix.

12.  Adding bike tourism functions to a system of DC visitor centers should also be a priority.

More rural areas often have a focus on bike tourism.  Quebec has developed the VeloHospitality program to support bike tourism on bike routes throughout the province.  The Trail Towns economic development initiative alongside the Great Allegheny Passage in Pennsylvania and the Canal Towns Partnership in Maryland is another example.

As are initiatives by various Maryland counties such as Caroline, Carroll, Dorchester, Talbot, and Wicomico, all of which publish special brochures promoting bike tourism.

Cities need to consider in a more focused way intra-city bike tourism as an element of the urban tourism offer as well as a transportation demand management strategy.

For example, comparable to the Canal Towns Partnership, a similar initiative could be developed for the trail system in the Anacostia River watershed.

As it happens, much of the financial success of the DC bike sharing system on an operating revenues basis comes from revenues derived from tourist use.  (The same goes for e-scooters.) 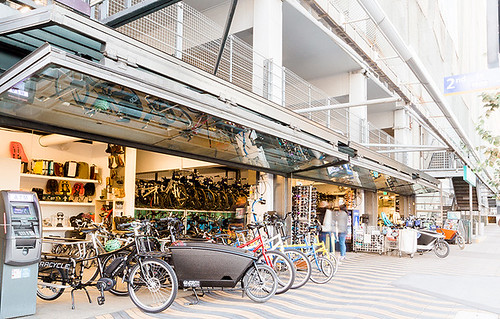 Incorporating such functions into at secondary visitor centers such as in Georgetown, Capitol Hill, and Dupont Circle could work well.

======
Note that the Park City, Utah visitor center is in a building incorporating a coffee shop, gift shop, a small meeting area with a nice conference table, and outdoor patio seating.