Another of the ideas in the Washington City Paper "How to Fix Everything"issue is on "building a parking structure under the National Mall" ("Build a Parking Garage Under the Mall "), offered up by Judy Scott Feldman of the National Coalition to Save Our Mall.

I've written about that proposal before, "Parking under the National Mall should be part of an integrated approach to visitor services and management."  (This post, "Need for a comprehensive visitor transportation plan in DC," from December 2011, is also relevant.)

I'm not against this idea, but as I argued before, building a parking garage under the Mall--their priority was more dealing with flooding issues--isn't worth doing unless it's part of a complete program to "serve visitors."

Otherwise it's a little idea, not a big one. 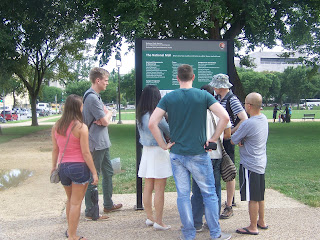 The first blog entry makes many recommendations, drawn from my comments submitted to the NCPC wrt their draft plan element on Visitor Services. To me, a parking structure on the National Mall is merely an add on to that proposal.

The recommendations from the blog entry included:

•  an infill Yellow Line subway station to serve the west edge of the Mall, specifically the Jefferson Memorial (although the station would have to be on the Long Bridge side, which is east of the Memorial
•  a visitor center located at the proposed Jefferson Memorial Station
•  a primary visitor center for the city at Union Station
•  promoting parking to tourists at Union Station 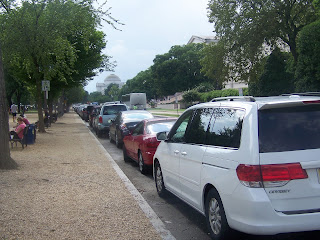 •  running a bus service on the National Mall between the visitor centers and the various destinations, with the main staging sites being Union Station and the Jefferson Memorial subway station
•  developing service corridors under the National Mall as part of the parking structure so that waste removal and other services for the National Mall can be delivered underground.

But I have to say while I thought reasonably big, I didn't think "massively big" (although the infill Yellow Line subway station is a very big deal--and is not original to me).

Note also that an advantage of an under the Mall parking garage is the ability to serve tour buses and get them off the street.  For a variety of reasons tour buses don't like staging at Union Station.

Besides building that parking garage, instead of running that bus service (ideally as a double deck bus service as suggested in my WCP entry, "Grow the Buses"), why not run streetcars instead? 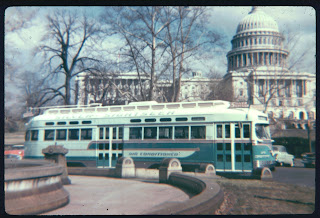 Of course, San Francisco's Market Street Railway program is the best example of how to do it. (One of these days I'm going to get this book, San Francisco's F-Line: The story of how America's most exciting and successful new transportation experience was built!, about how that program developed and evolved.)

Why not run a National Mall-focused heritage (replica) streetcar service to serve visitors?  Unlike the bus services, the streetcar system will be its own marketing, promotion, and advertising--a big problem with tourist-focused transit services is that constant marketing is required, because tourists "turn over" every couple days.

Note that Fairmount Park in Philadelphia had its own streetcar system for many decades.

Right: this streetcar in San Francisco is painted in the livery of the old DC Transit streetcar system.  Flickr photo by Karen Brockney.

In San Francisco, their F Line streetcar system is well understand as a tourist service without a lot of dedicated marketing.

The old DC Transit system adapted a PCC car for air-conditioning, christened the car the "Silver Sightseer" and used it to provide touring services.  Why not build a fleet of these cars to serve a dedicated National Mall route?

Brookville Manufacturing does build replica streetcars, but not the PCC model, but the plans should be available within the GE archives for streetcars, which I think are at the Hagley Museum. 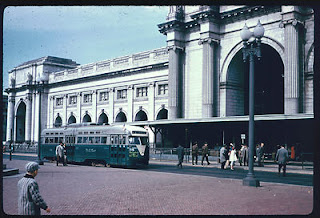 Big recommendations, besides the ones from "Parking under the National Mall should be part of an integrated approach to visitor services and management" would be to:


•  Remove parking from Madison Drive and Jefferson Drive, the two streets that bracket the Mall--cars would be diverted to the underground structure as proposed in "Build a Parking Garage Under the Mall;"

Currently, the parking on those streets is free, with a 3-hour limit.  Metered parking is provided on the numbered cross streets, I think with a two-hour limit (it might vary) and the cost is $2 per hour.  Clearly the pricing should be higher.

•  Put streetcar service on Jefferson and Madison Drives specifically, in place of the parking;
•  With service as far east as the US Capitol Complex, with the main staging point at Union Station;
•  With service as far west as the Kennedy Center, so transit service would serve the World War II and Veterans Memorials on the way, and get just up to Georgetown
•  Ideally with a spur to Arlington Cemetery across the Memorial Bridge to Northern Virginia. -  Of course, there is that pesky issue of overhead wire infrastructure.
-  Along with Georgetown BID's future planning, you could integrate part of this line to go into Rosslyn
-  Although hopefully DC will do that with their streetcar planning going to Georgetown anyway
-  Paying for it: ideally the service would be free, but the Market Street Railway charges, and it is a revenue positive service, meaning that the revenues support other SF MUNI services beyond the operational cost of the streetcar line
-  Marketing it.  SF doesn't have free museums, so they sell one of those CityPasses with cheaper cost to get into multiple attractions.  For an additional charge, you can get a 7-day transit pass.  WMATA's passes are far far far far far far more expensive than the equivalent cost in SF.
-  Another way to think about this is as a replacement of the Tourmobile, but again, it wouldn't generate the same level of revenues, and the National Park Service wouldn't be earning royalties
- The National Capital Trolley Museum should be brought into the program and so the Mall-based streetcar service would be an active cultural interpretation and history program as well. 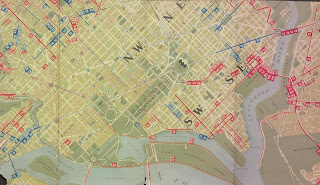 Image: section of a 1946 Capital Transit streetcar and bus map which does show bus service provided to Hains Point on the Potomac River (East Potomac Park).  The green sections are federal park lands, including the National Mall. 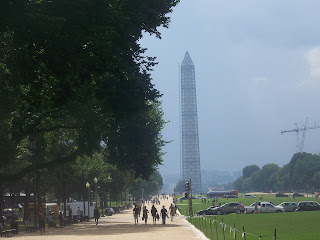 one of the best ideas I have heard in a long time- I have advocated a rail setup for the National Mall for a long time but using heritage streetcars never came to mind- this is awesome- but like the best ideas- it will not be used by the city as they always love to "say no" and tell us all the time "it cannot be done" sorry but seeing the metro flower planting story just shows how messed up the local bureacracies are around here- they are all nameless and faceless and not at all run by anyone with imagination or real purpose.

thanks for the reminder. I meant to write about the flower planting issue.

I think the overhead wires are the single biggest impediment to this otherwise great idea.

I don't know about ultracapacitor technology... there is also natural gas as an option. A Malaysian company is supposed to be putting NG trams into operation.

2. Longer term, that Bombardier technology (PRIMOVE) could work. Other underground technologies don't seem like they'd be viable for a 100% wireless trip. And batteries don't make sense either.

Memphis trolley system is another model.