Rush Medical Center (Chicago) clues us into a gap in state and regional health care planning: planning for disaster and epidemic response 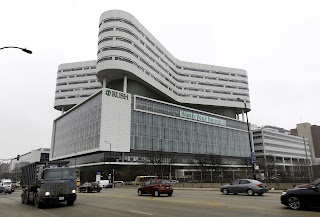 Chicago's Rush Medical Center has the ability to surge capacity by 130 percent, but without people taking aggressive preventative measures, including staying home, it can still be overwhelmed.

So, instead of advertising on the side of their building, they're using it to tell people to "wash your hands" in an effort to limit cases of a new coronavirus. Photo: Rush Medical Center.

A couple years ago, I wrote a three-part series about how DC could leverage the construction of a new United Medical Center in Southeast Washington--located in the East of the River section of the city, which experiences a great rate of poor health outcomes--as a way to create not just a superlative hospital with a transformational public health focus, it could also be used as a way to drive a biotechnology research and medical education initiative as an economic development measure, utilizing the St. Elizabeths campus, which the city has been working to redevelop for almost 20 years.

A recent Newsweek article on Rush Medical Center, "THIS CHICAGO HOSPITAL WAS BUILT AFTER 9/11 WITH AN EPIDEMIC LIKE CORONAVIRUS IN MIND," which built a new medical campus after 9/11, made me realize that I missed a big potential element, enhanced emergency, disaster response, and pandemic response capabilities.


The attacks on September 11, 2001, highlighted the need for emergency preparedness, and Casey said anticipating a range of disasters that could strain health care systems is the "new reality." Constructed with the foundational mindset that a disaster will cause an influx in patients, Rush has the ability to rapidly expand its bed capacity, intake capabilities and negative pressure units.

To get ahead of a likely influx in cases and prevent infection among staff members, Rush converted two units to negative pressure, a method used to prevent cross-contamination. Each unit has 20 beds, but hospital staff can double that number, bringing it up to 40 beds. Multiple floors within the hospital have this conversion capability and so far, they've flipped two.

"Twenty minutes. It's impressive," Casey said when asked how long the conversion takes. "We tested this over a number of years in different exercises, including the outbreak of an infectious disease."

In the DC area, a new Washington Adventist Hospital just opened in the White Oak section of Montgomery County and a new hospital is under construction in the Largo district of Prince George's County, replacing the Prince George's Hospital, as a way to shift control of the hospital system to the University of Maryland Medical System.  And the problem-wracked UMC is to be rebuilt.

I doubt that any of these "construction projects" have responded to the potential for disaster in the way that Rush Medical Center has.

Like how UMC probably isn't being built the same way that Rush Medical Center was, to be of special use in times of panedemic, the same is probably true of the new UMMS hospital in Largo.

WSJ, "Rethinking the Hospital for the Next Pandemic"