"The Whole World Is Watching" 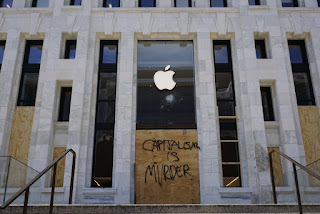 charlie shares with us a message/photo entry from Popville on last nights protests, disturbances, and vandalism, and for once, the message thread is pretty good (normally, people's comments aren't that interesting, so I don't normally pay attention to Popville).

The back and forth in the thread -- protest vs. vandalism -- and the belief that the "vandals" and the protesters likely are two very different demographics, reminded me of the book The Whole World is Watching by Todd Gitlin.  (Summary.) 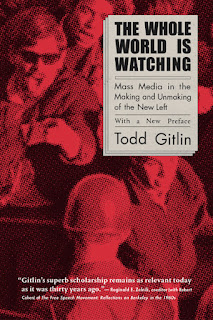 "The whole world is watching" was a phrase chanted by anti-Vietnam War demonstrators as they were beaten and arrested by police outside the Conrad Hilton Hotel in Chicago during the 1968 Democratic National Convention.

Gitlin was a president of the SDS and went on to become a professor.  The book is based on his dissertation, which is an analysis of the reporting on the Anti-war movement, focused on CBS News, then the dominant television network, long before the prevalence of cable television especially independent cable tv channels, and the New York Times.

A major point is that the lens which journalists cover demonstrations is through the approach to reporting on crime.

Another is how the reporting on the movement influenced the movement's leaders and decision making as well as people interested in joining and taking part.

But the key point is that the media are focused on maintaining existing social relations and aren't positioned to be able to communicate wide ranging narratives about structural issues (review, Carnegie Council, 1980).

Which is why I was so surprised to see this caption on photos of protests in South Florida via the Ft. Lauderdale Sun-Sentinel. 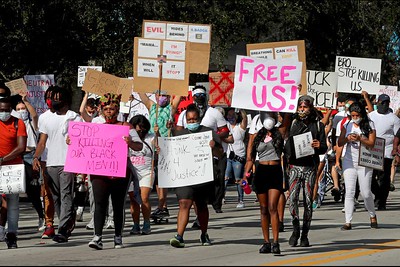 Although I can't imagine that full caption was reprinted along with photographs published in newspapers.

With the rise and ubiquity of social media, I am struck by the "diffuse networking" of protest over the George Floyd killing and in how many seemingly disparate places there have been demonstrations ("Networked Social Movements And The ‘Tyranny Of Structurelessness’," Rhodri Davies). 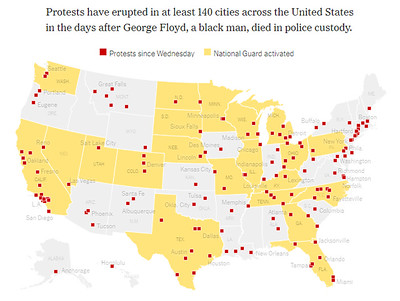 At the same time there is also an increased but diffuse networking around violent protest.

Where in the past, anarchist vandalism was localized, associated with demonstrating in the San Francisco Bay Area ("Anarchists in Berkeley play into the hands of enemies," San Francisco Chronicle) and Seattle ("Anarchists targeted after Seattle's violent May Day protests," Los Angeles Times; "May Day in Seattle has featured violence after peaceful marches," Seattle Times) especially around World Bank/IMF/world trade international meetings, now it appears to be nationwide.

I don't recall violence being associated so much with the #BlackLivesMatter demonstrations in the period bracketed by events in Ferguson, Missouri and Baltimore, Maryland. Occupy Protests across the US mostly didn't involve violence either.

It doesn’t help that the noisy presentation of television news, especially cable news, has an exhausting, deadening effect on a viewer: It all becomes a blur of speculation, opinion, posturing, repetition and even passion, after a while — not even a long while — presented in a frame cluttered with chyrons and windows and split screens. Events can be obscured by their very reporting. Even on different networks, hosts grab from the same bag of often obvious questions, which elicit often obvious answers. I don’t want to say it’s unhelpful — there is information there, and sometimes the obvious question is the one that most needs to be asked — but it feels inadequate, unequal to the moment, confused, floundering. Perhaps it’s appropriate.

I don’t mean to accuse any particular person of doing a poor job; like any viewer I find some broadcast journalists more and some less congenial. This failing feels structural; it may simply be beyond the capacity of news as we know it to tell this story, or any complicated evolving story, however many on-the-street encounters and interviews with public officials any network might air.