Most of these books, aren't necessarily what you read in a planning policy or public administration class, more books about cities and not particularly "technical," but if you read them all, you'd be well prepared to understand urban revitalization.

And I've only listed books that I've read completely.  Compiling the list makes me realize there I some books I need to fully read like Economy of Cites, Getting There: The Epic Struggle between Road and Rail in the American Century, Fighting Traffic: The Dawn of the Motor Age in the American City, Life between Buildings and Cities for People by Jan Gehl etc.

Hopefully I'll read Learning from Bryant Park sometime this month and write about it... 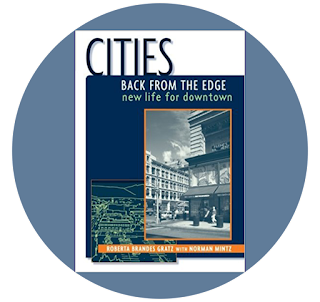 Although I do say if you're only going to read one book, read Cities: Back from the Edge by Roberta Gratz.  That's for cities.
Reclaiming our cities and towns is essential for understanding transportation.

The centrality of cities and how they function

Death and Life of Great American Cities -- Jane Jacobs, the classic.  Four key elements for successful cities: population density; mixed primary use; a network of blocks and grids; and a large stock of old buildings.

Cities: Back from the Edge -- by Roberta Gratz, a Jacobs acolyte.  I think of it and an earlier book, The Living City, as primers putting the concepts laid out by JJ into practical, real terms.

Urban Fortunes: Towards a Political Economy of Place -- outlines the "Growth Machine" thesis, that local political and economic elites are united around a pro-growth, real estate development focused agenda, and defines "use" and "exchange" value of place 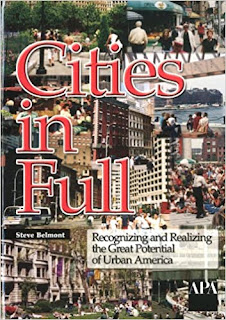 Cities in Full -- is more technical than the other books, putting numbers to Jane Jacobs, although  the numbers it presents about the level of population needed to support neighborhood commercial districts need updating in the face of e-commerce and retail consolidation.  Lays out the vitally important concept of polycentric versus monocentric transit systems.

If you're more technically inclined, it's the other "one best book" to read.

Next American City: The Big Promise of Our Midsized Metros -- by Mick Cornett, the Republican former mayor of Oklahoma City.  Lays out the value of investing in community and social infrastructure--civic assets--as a way to build place, create community, and attract new investment.

Pocket neighborhoods is beautifully written and illustrated, and is about middle housing types, like courtyard housing.

The Divided City and Bringing Buildings Back by Alan Mallach are important contributions to thinking about housing and revitalization in weaker market cities.

I don't know of a great book on "multiunit" housing per se.

Palaces For The People: How Social Infrastructure Can Help Fight Inequality, Polarization, and the Decline of Civic Life -- Eric Klinenberg.  Lays out the value of social infrastructure as the glue of successful communities.

(This is where Learning from Bryant Park goes.)

Changing Places: Rebuilding Community in the Age of Sprawl -- a great discussion of the value of historic preservation to community stabilization and improvement.  It's out of print but I think is a better introduction to the value of HP than more recently published books.

Future of the Past: A Conservation Ethic for Architecture, Urbanism, and Historic Preservation -- argues against the modern interpretation of how to handle new or replacement buildings in historic districts, calling for architecture of its place and context, not time

Reclaiming our cities and towns: Better living with less traffic -- by the Australian David Engwicht, this lays out the role of transportation in cities and the value of exchange of all types as the driving force for agglomeration; the author coined the "transportation demand management" concept recognizing that if people got around more efficiently and not necessarily by the car, you wouldn't need to constantly widen roads.

People won't live in cities if they aren't safe.

Fixing Broken Windows -- the theory transmogrified into zero tolerance policing.  FBW makes the point that places where decay is allowed to fester are less safe than those that are maintained.  But the execution of the theory into policing practice ignored the recommendation to invest in places, not just policing.

Code of the Street/Streetwise -- by Elijah Anderson, anthropological studies of inner city Philadelphia and the challenge of middle class versus street culture in the context of personal and public safety. 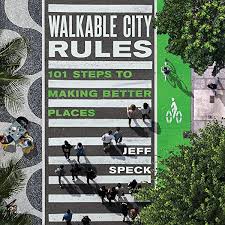 City: Rediscovering the Center -- William Whyte was the editor of Fortune Magazine, and an article ("Downtowns Are For People") he commissioned by Jane Jacobs led to her getting a contract to write Death and Life.  He was an early proponent of focused study of urban spaces for pro-people urban design interventions.  His study of how people actually use spaces informs this book.

How to Turn a Place Around -- separately, the group Project for Public Spaces grew out of this work, and this book outlines their community-involved ground up approach for initiating and creating urban design improvements in neighborhoods and other public places.

Maybe Jeff Speck's Walkable City Rules: 101 Steps to Making Better Places.  There's a lot I don't like about how it's organized, but in terms of it being an accessible listing of "what you can do to make cities more livable in practical, achievable ways" it's a nice primer.  (Although there's a lot of distance to cover between the 2-page description of a "step" and making it happen.)

(This is where Economy of Cities goes.)