Thinking differently about the future of energy

A few years ago, my brother mentioned to me his thinking that the reason there was so much push for electric cars was to reshape the demand for oil as an element of foreign policy.

High volume producers like Russia and Saudi Arabia are dependent on oil (and natural gas) as a significant generator of national government budgets, but also use energy supplies and provision as a way to project national power.

Businessweek pointed out a few years ago that the US is also a major oil producer, equally a Petro State like Russia or Saudi Arabia ("The Petro States of America").

Coincident with the start of the pandemic, Saudi Arabia dropped oil prices as a way to pressure both Russia and the US shale oil industry.

The timing was bad, but the pandemic-fueled recession dropped oil demand and pricing, thereby crushing the US shale oil and natural gas industry ("The oil crash doesn't look good economically for states like Texas (Oklahoma, North Dakota, etc.)"), which was what SA and Russia wanted all along.

US shale-focused firms are entering bankruptcy at a fast clip. BP is reducing its reliance on oil production.  And as the production of electricity becomes more prominent, independently of the energy source which produces it, "utility companies" like Iberdrola, E.ON, and RWE become as significant as oil companies.

1.  Economist Magazine has a story on the future of "Electrostates" suggesting that China, just in terms of its place in the manufacturing of solar panels and other clean energy technologies and the deployment of these technologies at such a large scale, will supersede the place of petrostates like Saudi Arabia ("America’s domination of oil and gas will not cow China").

2,  But Foreign Policy Magazine disagrees ("Everything You Think About the Geopolitics of Climate Change Is Wrong"), making the point that what will matter going forward, at least during the long period of transmission, is the cost of energy production--Saudi Arabia is the cheapest producer of oil, and Russia of natural gas--vis a vis low and high cost (like shale) producers, as well as the overall environmental efficiency of production--for example, compared to the US oil producers, there's very little flaring of natural gas ("The US Oil and Gas Industry’s Methane Problem Is Catching up With It," Resilence). 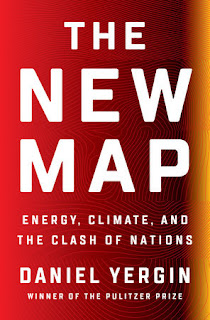 Relatedly, the Wall Street Journal excerpts ("The New Geopolitics of Energy") a new book by Daniel Yergin, The New Map: Energy, Climate and the Clash of Nations (review).

4.  This is relevant to Utah and Idaho because there is a long term push to build an "efficient" experimental nuclear energy facility, to be funded by local municipalities through long term energy contracts ("How nuclear power may become a reality for Utah and Idaho" and "Critics of planned nuclear power project urge Utah cities to pull out before it’s too late," Salt Lake Deseret News).

I thought it was "crazy" merely because over the last 40 years, virtually every new nuclear energy construction project in the US has ended up in disaster with billions of dollars of overruns.

It just doesn't make sense from the standpoint of construction, overall safe management of the facilities (although certain US utility firms have developed best practice expertise in running such plants), and dealing with safe handling and storage of nuclear waste.

6.  Electric cars and Tesla.  I've been critical of Elon Musk because he's a blowhard, but the reality is that he is reshaping the US car industry towards electric vehicle production. What's interesting is that with these kinds of scalar shifts in the nature of an industry, traditional producers stuck not just with legacy costs but legacy systems, can be wrong footed in terms of marketing, branding, and image.  That's what's happening with Tesla vs. Ford and GM.

Ford and GM can manufacture vehicles much better than Tesla, but in terms of brand image, people won't seek out electric vehicles from the traditional companies, because those firms aren't cool.

Although Tesla is superior in battery technology and the use of IT, especially in digital versus analog upgrade processes, and in developing external fast charging networks "in the field" making it harder for Big 3 vehicles to compete ("EV Comparison: Tesla Model 3 Vs. Chevy Bolt," InsideEVs).

It's a different element of disruptive innovation that hasn't been discussed in the context of the original theory.

7.  And because electric cars are so much cheaper to maintain compared to internal combustion engines, the higher initial price is offset by lower maintenance costs over time ("Tesla Model 3 crushes Dodge Charger in 1-year review of cost of operation as police car," Elektrek).

In other news, LA dumped its entire inventory of BMW i3 as police cars -- many with 350 miles on them.

What will that do to office space and residential use in the bay area?

1. Hmm, seems like they made a bad choice on that particular car. Only 81 miles of range.

2. Tough balancing the issue of GHG with urban vitality. If it's the former, you'll destroy the city.

Why not instead of force telework, "force" sustainable commuting methods.

... "what would Jane Jacobs say?" (Now I really need to sit down and read _Economy of Cities_)

3. Not the same issue, but someone made the point that instead of building HSR2 in the UK, they could use that money to build/improve tram networks in many UK cities.

I hate these kinds of comparisons, because the types of trips they serve are scalarly different. OTOH, the latter would have a lot more impact on sustainable mobility than HSR, because yes, in England at least, you can still get around pretty well by train without it being high speed.

Then again, also invest in more electrification to speed up lines where you can.

Polestar is going the Tesla route of a standalone brand, separate from the corporate parent and original home (Volvo).

Need for a more robust grid if you're going to shift to electric cars.

This is especially pronounced in California, which has just announced a ban on the sales of ICE cars as of 2035, and in the face of electricity power supply issues in the face of wildfires, demand, and various current renewable power requirements now.

Vox.com: Geothermal energy is poised for a breakout.
https://www.vox.com/energy-and-environment/2020/10/21/21515461/renewable-energy-geothermal-egs-ags-supercritical