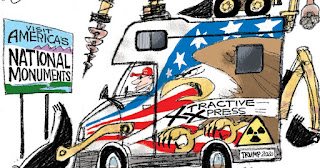 Today is National Public Lands Day, designed to call attention to federal (primarily), state, and local public lands.
Mostly, people probably are aware of it in terms of it being one of the days every year where entrance to national parks is free.
Federal public lands and installations are managed through a variety of agencies: the Bureau of Land Management, National Park Service, and the US Fish and Wildlife Service, units of the Department of Interior; the US Forest Service which is part of the Department of Agriculture; and installations around US Army Corps of Engineers water projects.
Many states have similar kinds of units, but all usually under a parks and natural resources agency.  Salt Lake City is a rare local government that has a parks agency titled "Parks and Public Lands" because some of the city's open spaces are more akin to the "public lands" managed by BLM.
Some states and localities are better than others in trying to leverage the event for volunteer and other promotional activities.
Some of the elements I wish I had more time to write about include: 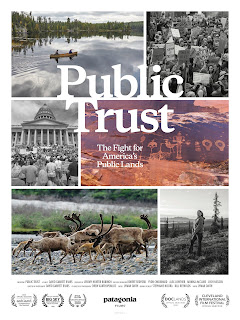 "Public Trust" documentary available for free streaming.  The Guardian reports ("‘Everything's for sale’: the shocking film on the privatization of American public lands") on a new documentary out about the privatization push by the Trump Administration and conservative politicians and interests.
Patagonia Films has made the film available for free streaming.
Reversion of some federal lands: national.  A big thing Western conservatives are into is the federal government giving up nationally owned properties to local governments as part of the passage of the Great Outdoors Act.  For example, in Utah, some federally controlled but locally used water resources are being deeded to the local water systems ("Feds hand over water projects to local districts in Utah," Salt Lake Tribune).
But not in DC.  It's unfortunate that steps weren't taken to do some similar land transfers in DC.
I've argued for many years that in DC, many NPS park lands should revert to DC ("Defining National Park Service installations in DC as locally or nationally serving," 2019) and that NPS shouldn't be maintaining major roads ("The National Park Service shouldn't be on the hook for basic roadway infrastructure in the Washington Metropolitan Area," 2016), which absorbs money that would otherwise go to parks.
Then there is the issue of the RFK Stadium site, which also should revert to local control ("Yes, modify and extend the RFK Campus lease; No, don't do it for the Washington Redskins football team," 2018).
Television programs about public lands issues.  Nationally, there is a program running on PBS stations but also on some traditional television stations called "This American Land, " although it's more about farming, not so much about public lands.
Other shows include "America's Forests with Chuck Leavell" and "Outdoor Journal."  But many of the "national" shows about public lands aren't run on a systematic basis on many of the nation's PBS stations.
So for all intents, these shows don't exist, except when they may be broadcast on the PBS Create or World channels.
Obviously, there is the national PBS series on "The National Parks," which is frequently repeated.  To leverage that program, some PBS systems created companion programs about national parks within their states.  (PBS Utah runs shorter interstitial programs about the national parks in Utah, drawn from the Ken Burns series, which run frequently during those intervals between the end of the program and the start of a new one at the top of the hour.)
It'd be nice to have a master list of such programs, and PBS should promote these programs around special events like National Public Lands Day, National Trails Day, National Parks Week, etc.
Many state level public television systems produce programs about parks and open land resources in their state, like Outdoors Maryland, This is Utah, Outdoor Idaho, Iowa Outdoors, etc.
Sometimes, but not frequently enough, these shows may be rebroadcast on the PBS Create channel.  (We once saw a rebroadcast of the Montana PBS production of "Bard of the Backcountry" about Shakespeare plays presented outdoors throughout the state.  If it hadn't been for the pandemic, we would have seen that this year.)
PBS Utah also broadcasts the PBS Idaho program, since that state's resources are so close by.
In the SF Bay Area, the local NBC station is unusual in that this for profit station produces an outdoors focused show called "OpenRoad with Doug McConnell."  I'm not familiar with similar programs produced by other for profit tv stations.
Outdoor Afro is a national initiative working to get more African-Americans out and experiencing the outdoors ("We hike to heal': Utahn encourages people of color to explore the outdoors," Salt Lake Tribune).
HBCUs Outside is another program with a similar mission ("Ron Griswell Has a Message for Black College Students: The Outdoors Are For You Too," Backpacker).  From the article:

Ronald Griswell’s first encounter with the outdoors left him awestruck—and frustrated. His family was on a road trip when his parents stopped the car at an overlook on the Blue Ridge Parkway to admire the rolling mountains in the distance. For young Ron, however, looking wasn’t enough. He wanted to get out and explore. That memory, he says now, still inspires him to hit the trail today—and to give others the chance to do the same.

Griswell is the founder and CEO of HBCUs Outside, a non-profit organization dedicated to giving students at historically Black colleges and universities the opportunities and the means necessary to explore the outdoors by organizing excursions, providing access to gear, and connecting outdoor-minded Black students to one another. Two years after its foundation at North Carolina A&T State University, the organization is relaunching nationwide this month.

While “the trail doesn’t discriminate” is a common refrain, studies show that Black Americans recreate outdoors at a disproportionately low rate. According to a 2019 report by the Outdoor Foundation, 75 percent of all moderate outdoor participants in the U.S. are Caucasian while only 8 percent are African-American. ...

Bay Area Open Space Council as a regional public lands advocacy best practice example.  Obviously, there are plenty of organizations that deal with public lands issues, like the Wilderness Society and the Trust for Public Land.  A regional example is the Bay Area Open Space Council, which has an annual conference.
Latino Outdoors is a Latinx focused outdoors organization.  Below is their infographic outlining their approach to change. 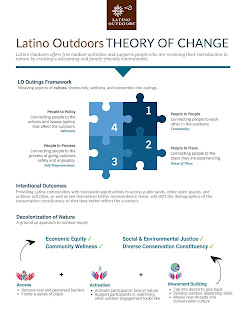