This piece, originally dating to 2009, discusses arts and culture districts in terms of their ability to spark urban revitalization, while at the same time supporting arts as production rather than strictly as something to consume.

Among other topics, it discusses access to space as the key planning element and the types of anchor facilities necessary to support artistic disciplines and endeavors.

But it also makes the point that artists and disciplines need to represent their own interests, especially when it comes to real estate, and develop their own plans if need be.  They shouldn't see real estate developers as saviors. 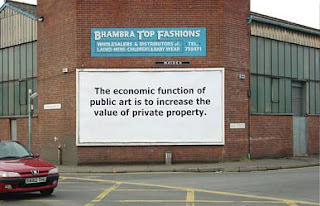 The work sets out to question the function of art in the public realm within the economic regeneration of post industrial cities.

And it builds from a number of posts about repetitive failures of arts organizations, mostly, but not limited to DC, recently summarized here: 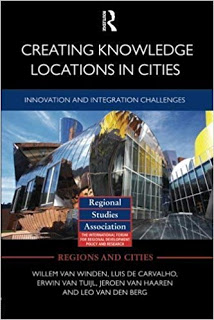 It's also hard to build an arts district from scratch, especially in high value locations because by definition arts uses can't pay top dollar for space.  And new space costs a lot to rent or own.  Cf. culture institutions often get into trouble financially taking on big capital projects, and changing the cost nature of their real estate function from low to high.

Eventually, if the location is good and the real estate market is or becomes strong, rents rise to the point where arts uses get displaced (see Sheila Zukin's Loft Living, which dates to the 1980s.).

So key to the planning of the longevity of the arts presence is acquiring and holding real estate, which I summarize as BTMFBA: "Buy the M***** F****** Building Already."

The best way to implement this is through the creation of arts-focused community development corporations, operating at the scale of a city or county, like SEMAEST in Paris or the Pittsburgh Cultural Trust, although there are smaller district initiatives like BAM or BRIC in Brooklyn, Playhouse Square CDC and the Gordon Square Arts District in Cleveland, Penn Avenue Arts Initiative in Pittsburgh, etc. 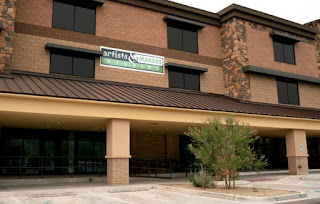 Artists & Makers Studios located at 11061 N. Oracle Road in Oro Valley, Arizona, will be home to 12 artists spaces and one gallery. Tommie Lorene / For the Arizona Daily Star.
Arts studios in storage facility buildings.  Greater Tucson comes up because Artists & Makers, an arts studio building in Rockville, Montgomery County, Maryland, has hooked up with a real estate firm that builds storage facilities around the country, and is opening studios on the ground floor of a storage building in Tucson ("New artist studios bolster Tucson as a haven for creative minds," Arizona Daily Star).
A&M thinks they are unique, but they aren't, and they mostly survive by renting studio space to dilettantes who can afford to pay monthly rent.   I don't think the Tucson facility is part of an arts district, and not unlike the A&M Rockville site, it's many miles--in this case 14--from Downtown Tucson.
A&M hasn't seeded an arts district in the Rockville Pike area of "North Bethesda/Rockville" even though the potential is there and there is a long range redevelopment initiative underway that includes a focus on culture as a defining element ("Tysons, White Flint and the continued "maturation" of the suburbs," 2013). 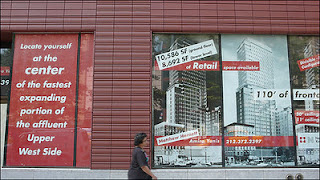 An Upper West Side advertisement by a New York real estate firm borrows from the aesthetic popularized by Barbara Kruger's art, below, in the 1980s. "My work was always about questioning the power, the ownership of images," the artist says. (By Lucy Hogg)
Activation and arts as a real estate development strategy.  To me this is more a real estate play, an illustration of how real estate operators use ("leverage") the arts to "activate" real estate properties, regardless of whether or not the location is situated to spark further development and creation of arts spaces.
-- "Growing Value through Creative Placemaking," Urban Land Magazine
-- "Bridging policy and placemaking to activate vacant properties," Center for Community Progress
-- Placemaking consulting services, Agora Partners
-- Retail and Placemaking, CBRE Research
-- "Five Steps to Creative Placemaking," Urban Land Magazine
Then again, as I wrote in the 2009 piece:

Plus, almost by definition, storage facilities are defined as a marginal use, focused on absorbing available space cheaply because there aren't better alternatives because of demand and/or location. 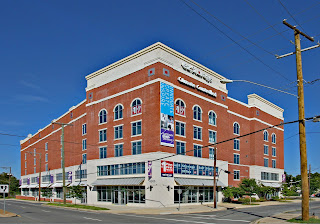 Interestingly, one of the first places I saw this done is in the Gateway Arts District on Route 1 in Prince George's County, Maryland, just across the DC border along Rhode Island Avenue.
In 2013 the GAD convinced the regional firm EZStorage, which was building a facility on Route 1 in Brentwood/ Hyattsville, midway between other hubs in the arts district, to activate the ground floor of the building with artist studios, as a way to further build the arts district concept.
Note that storage facilities in cities have often been used unofficially by artists ("5 Ways Self-Storage Studios Work For Artists," SpareFoot Blog) and makers in similar ways, for band practice, etc.
Although the Brentwood location hasn't contributed much because it's in the wrong place to build critical mass, except over many decades.  I'm not sure what the rents are or the average length of tenancy.  There appears to be a fair amount of turnover of the spaces.
Other interesting arts anchor spaces in Tucson.  But the Tucson article is interesting in another way (even if they don't know yet that the A&M isn't likely to amount to much), because it lists other artistic discipline support and anchor facilities, or arts/creative hubs.  (Which people may call maker spaces.)
-- "Innovation infrastructure as an element of community economic development: BioSpaces; TechShops; Maker Spaces; Arts spaces," 2020 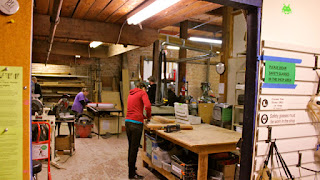 Xerocraft Hackerspace has metal, woodcrafting, and electronics shops, and a 3D printing station.
They offer classes both on site and in the community, and even have a license for a low power community radio station.
-- "Revisiting community radio," 2020
It's somewhat comparable to spaces I've written about in the past including TechShop, Third Ward (Brooklyn, Philadelphia), the Philadelphia Sculpture Gym, and the Woodworkers Studio in Rockville, Maryland.
-- "Sad but not a surprise: bankruptcy and shutdown of TechShop MakerSpace chain," 2017
Likely that they are a nonprofit contributes to their longevity, as opposed to attempts to create similar but for profit facilities.
Warehouse Arts Management Organization manages three facilities in the Warehouse Arts District in Downtown Tucson.  The spaces support 70 artist studios and 14 arts-related businesses, with 6,000 square feet of exhibit space.  WAMO provides some programming, offers a retail shop, and a monthly arts walk.
-- Warehouse Arts District
-- Historic Warehouse Arts District Master Plan, 2004
Groundworks is a music anchor space with programming, studios, and event spaces, focused on the youth demographic ("Tucson musician lays the Groundworks for new, youth-driven music and arts center" and "Groundworks finds a home: youth center one step closer to opening," Arizona Daily Star).
In part, Groundworks is a response to a need for learning opportunities that schools don't really offer, and the decline in the availability of performance space suitable for all age audiences.
-- "Ground up (guerrilla) art #2: community halls and music (among other things)" (2011) 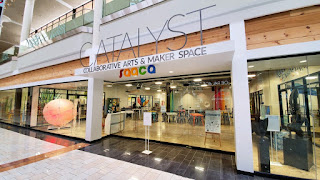 Catalyst.  In 2019, the Southern Arizona Arts & Cultural Alliance opened a maker space at Tucson Mall, called the Catalyst Arts & Maker Space ("New maker space in Tucson Mall a catalyst for future development," Arizona Daily Star), although like most group oriented places, it's been closed during the pandemic.
The 14,000 s.f. space replaced Gap and Gap Kids stores.
Catalyst has classroom and education spaces, co-working space, an art gallery, performance spaces, a culinary education kitchen, a robotics and engineering lab, studio space, and a music, film and digital media production studio.
PopCycle is a cooperative gallery.  That's not particularly unique, but that it exists is a big deal.  There aren't that many such spaces in Metropolitan Washington.  (Although Pyramid Arts Center in Hyattsville, which is an amazing space, does have a gift shop and sells pieces made by their members.)
Will storage facilities put arts studios on the ground floor as a matter of course?  The other interesting thing is whether or not more storage facility developers will take this up as a regular feature in their facilities?
I doubt it, because most are owned by real estate investment trusts, which have very narrow operating models that are strictly financially based.
Non-commodified spaces in shopping malls. There is plenty of media coverage about malls and the integration of different types of spaces--restaurants, supermarkets, office space, fitness centers, co-working spaces, etc. because the rampant failure of retail.
-- "6 Ways To Fill Empty Space At Your Mall," PocketStop
-- Empty to Alive: The Next Use for Department Store Space, JLL
-- "16 Ways Malls Are Filling Space Besides Stores," Motley Fool
-- "Empty malls are getting some surprising new tenants," CNN
(I also wrote something related, back in 2006, "Lifestyle Centers vs. Traditional Commercial Districts: Imitation, Authenticity and the Public Realm.")
But for the most part, these are for profit ventures. The Catalyst Arts & Maker Space in Tucson Mall is an outlier, because it's a nonprofit type space, probably paying lower than normal rent. But it's no less a valuable approach for activation and space absorption.  (There are some rare examples of libraries too, being placed in active shopping malls.)
In any case, Catalyst is a one off.  Really cool.  But it's not going to shift the shopping mall into an arts district.