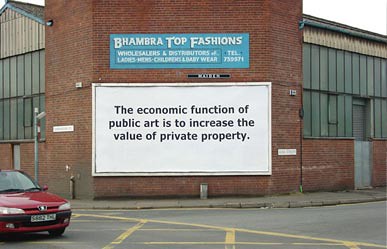 The work 'The economic function of public art is to increase the value of private property' sets out to question the function of art in the public realm within the economic regeneration of post industrial cities. The image will accompany a text in a journal by Public Art Forum to be published later this year.

Buy the Mother F* Building already.  My BTMFBA pieces discuss the need for artists and artistic disciplines to take control of the real estate they work or live in order to protect their interests--especially long term interests over multi-decade periods of time.

That they can't expect real estate interests or planners to do it for them.

Transformational Projects Action Planning Framework specifies the need for an implementation organization.  Various writings summarized in "Why can't the "Bilbao Effect" be reproduced? | Bilbao as an example of Transformational Projects Action Planning" (2017) led to what I now call the concept of "Transformational Projects Action Planning" which lays out six elements necessary for successful knock your socks off ("transformational") revitalization:
Revising my arts and cultural planning work to call for the creation of an arts-focused community development corporation as an implementation mechanism to buy, hold, and rehabilitate commercial and residential property for arts uses.  And in that vein, I modified my recommendations concerning "arts, culture districts, and revitalization" planning to specifically call for an implementation mechanism of arts and culture focused community development corporation to buy, rehabilitate, construct, and hold arts-related property including housing. 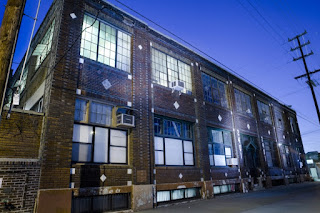 So why should anyone be surprised when a profits-oriented real estate developer buys a Los Angeles building housing artists in a now attractive location, paying what are below market rents is repositioning the property for the highest paying segments of the housing market according to Hyperallergic, "Residents Are Being Priced Out of an Art Colony in Downtown Los Angeles." From the article:


Artists at the Santa Fe Art Colony, a historic live-work compound on the edge of the Arts District in downtown Los Angeles, are facing displacement after new ownership notified tenants on September 1 that rents will rise as high as 82%. With limited time and money, residents are scrambling to find housing that can suitably accommodate their studio practices.

The Santa Fe Art Colony was established in 1988, long before the Arts District became an attractive site for developers. In June of this year, a Miami-based development agency, Fifteen Group, purchased the buildings for an undisclosed amount with the intent to upgrade the lofts into luxury properties. On November 1, roughly one-fifth of the current residents will see their rents spike by between 13 and 82%. The majority of residents cannot afford the new rent outlined in Fifteen Group’s new, 49-page rental agreement and feel they are being evicted from their homes.

With all the money sloshing around in the LA art world, it ought to be possible to create an arts-focused CDC and raise a fair amount of capital to begin buying properties.

While not focused on housing, the Pittsburgh Cultural Trust and the Playhouse Square Development Corporation in Cleveland are the best practice models. 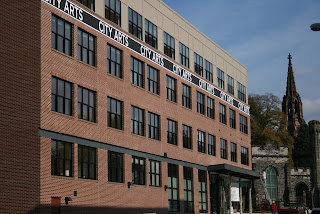 While not owning tons of housing, Jubilee Housing of Baltimore has done some interesting arts housing projects, and there is the national example of ArtSpace, although they are good at building housing, they are not good and helping local organizations to build the capacity to do this themselves.

a situation in Minneapolis. The columnist for the Star Tribune doesn't get why a "nonprofit" needs to step in now, for a complex of buildings that had been decrepit but then rented out to artists and become successful.

The market changed, and so market forces would in normal circumstances, result in a changing of the use/significant raising of the rents.