Most every year, DC ranks in the top 5 "city park systems" in the US based on the flawed scoring methodology of the Trust for Public Land's ParkScore® system.

DC ranks highly because of the inclusion of federal parks and open space resources and because the methodology doesn't rank based on the variety and type of spaces, programming provided, etc. ("Washington DC has lots of parks and open space, but it's not the #1 City park system in the US"," 2019).

A robust parks and open space planning process would plan at three scales: city-wide; multi-neighborhood or district (quadrant); and neighborhood.  It would classify spaces and work to ensure that neighborhoods have a goodly breadth and variety of such spaces and uses available to them.

For example, in the plan for the Buckhead District of Atlanta, the master plan outlines the following nomenclature for types of spaces: 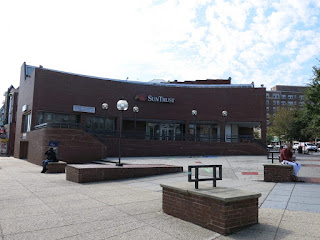 The Washington Post reports ("Judge rules that groups have no legal standing to fight Adams Morgan project") on a Court ruling concerning a case brought by neighborhood groups in the Adams-Morgan neighborhood on retaining a "public plaza" at the southwest corner of the intersection of 18th Street and Columbia Road NW.

In the 1970s, the now defunct Perpetual Savings and Loan constructed a branch there with a large publicly used plaza in front.

Apparently, no easement was ever recorded.

And because the city doesn't have a parks and open space master plan, nor such plans at the neighborhood scale like Adams-Morgan, the failure to secure an easement for this space was never identified as an issue (DC generally has a problem with securing easements when necessary, for sidewalks and similar spaces). 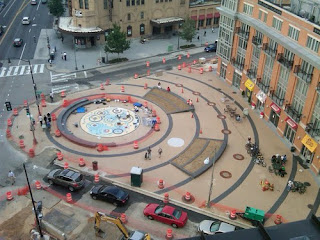 There is a splash fountain, farmers markets a couple times a week, it's a staging point for demonstrations and other events, etc.

It's a great example of what I call the layering of public spaces and activities ("The layering effect: how the building blocks of an integrated public realm set the stage for community building ," 2011) and it's also a great example of what most DC neighborhoods don't have, a centrally located appropriately-scaled public plaza, because DC just doesn't do that kind of fine-grained and nuanced public space planning. 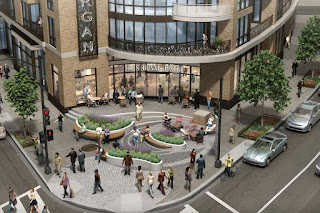 A few years ago, the Adams Morgan property was sold to a local developer, which aims to build a large apartment building there, with a significantly reduced public space in front, one that could not accommodate current farmers stand and other larger scale activities.

The Court ruled that the parties to the lawsuit didn't have standing.

That if there is supposed to be an easement, the DC Government would be the appropriate party, not independent neighborhood groups.  (Although it's not out of the question for nongovernment entities to secure these kinds of easements*.)

It's rare for the city to take on private developers but it's not unheard of ("360 Apartment building + Giant Supermarket vs. a BP gas station, which would you choose?," 2013), although it's increasingly unlikely by the successors of Anthony Williams, who tend to have an unreflexive approach to "economic development" vis a vis public space and interests.

There are other cases in the city--in Brookland, Columbia Heights ("Another example of the need to do comprehensive parks, recreation and civic assets planning at multiple scales, including neighborhoods like Columbia Heights," 2019), and Takoma where the city has bought land or agreed to do so in favor of maintaining park-like uses.

Here the failure is a lack of systematic planning at many scales, forcing neighborhood groups to take on matters that a city ought to be dealing with. 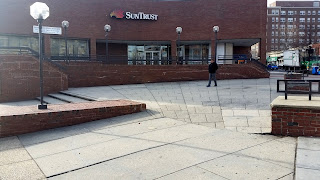 Crappy space.  Interestingly, many of the comments on the Post article are negative, saying that the space is crap and therefore not worthy of saving.

That's ridiculous.  The point is not that the space is poorly designed, but its centrality and potential viability.  Badly designed spaces can be improved.

Property rights or a planning failure.  And many of the comments focus on that the space is privately owned and the owner should be able to do whatever they want.  The issue is more complicated.  It's really a matter of lack of planning, both in terms of parks planning more generally but also in identifying the failure to secure an easement for the continued use of the public space.

Possible solution: Eminent Domain.  One of the Post comments raised the specter of eminent domain.  But that's actually a great suggestion.

DC should buy the property, place an easement on a portion of the site for a plaza--probably larger than what the developer proposed but smaller than what residents may want--and then sell the rest of the property for development.

Next steps.  All along the city should have stepped in to this issue as a planning matter, but for the most part the city refused to do so, treating it as a property development and approval matter.

The City AG is noncommittal about stepping in.  I don't know what the position of the Councilmember is.  I doubt the very pro development Mayor wants to get involved.

Ideally, like with the BP gas station on the 300 block of H Street NE discussed in this entry, there could be a mediated process, where the developer gives up more space for public use, and a process for managing it independently, perhaps in part for a monetary exchange.

Councilmembers should demand that the city complete the Parks and Open Space Master Planning process as well as to create sub-plans at the quadrant and neighborhood scales as appropriate, using models from elsewhere as well as the Columbia Heights Public Realm Framework Plan, which was never used as a template to expand, extend and improve neighborhood planning practices in DC.

When the Hospital shuttered and was sold, FBA had extranormal rights to oppose the project because of the easement they held.  FBA agreed to give up or "release" the easement ("extinguish") in return for a large monetary payment, part of which--more than $1 million--was used as an incentive payment to Trader Joe's, to open a specialty grocery store on the site.

A neighborhood group could have been the signatory to an easement agreement with Perpetual.  Although this didn't ever happen.