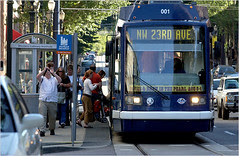 More than 10,000 residential units have been built and $3.5 billion has been invested in property within two blocks of the streetcar line, according to Portland Streetcar Inc., which operates the system. Photo: Dana E. Olsen/The Oregonian, via the New York Times.

No one with sense can go to Portland, ride and analyze the streetcars, and come back to DC and argue that streetcars, for whatever ridiculous reasons and convoluted logic they come up with, _can't_ work in DC. Our roads aren't too narrow either. (Portland Ground is a great website for photographs of Portland, including transit.)

1. I do think that implementing streetcar transit systems are probably the number one neighborhood-based economic development tool that cities can engage in. Primarily because what cities must do--generally--is stoke demand in places that otherwise experience lack of demand. It's necessary for repositioning neighborhoods in center cities as desirable vis-a-vis other, "more desirable" neighborhoods, in the suburbs.

2. But it's necessary to realize that streetcars are a particular type of transit appropriate to particular kinds of settings. They are not ideal for long routes and high-capacity demands.

3. Today's New York Times has an article on the subject, "Downtowns Across the US See Streetcars in Their Future."

4. WRT point 2, it's necessary to think of a region and the localities within the region as a transit network and set of subnetworks and plan accordingly, along these lines:

Suburban Primary Transit Network: transit systems operated by Counties and Cities in the Washington region providing bus, streetcar, and lightrail service within the suburbs, and connections to stations within the regional transit network. Transit service in this category is classified by speed and destination.

DC Secondary Transit Network: the other 11 subway stations in the city; other WMATA bus service within the city; water taxi service if added, depending on the routes.

5. Note that where I define the Suburban Transit Networks very broadly, each county (and certain subjurisdictions such as the City of Fairfax) would in turn define its transit network in a more micro fashion along the lines that I have defined DC's transit subnetworks.

6. Many of the counties are engaged in transportation planning exercises currently, including Prince William ("County to Add Mass Transit To Plan for Transportation: Supervisors Addressing Growth, Long-Term Needs" -- Post), Howard ("Proposals Outlined To Improve, Expand Howard Bus Service" -- Post), and Prince George's ("Greenbelt Forum Focuses on Transit: City Seeks Input From Residents" from the Post and "County gears up to enhance public transit" from the Gazette).

7. Of course, Arlington County has led the way in the Washington region (and is a nationally-known best practice example) in terms of linking transportation and land use planning. See Roger Lewis' Post column, "Lessons of Arlington's Urban Development Needn't Be Just History" as well as the Arlington County Master Transportation Plan.