A breakdown in a functioning civil society 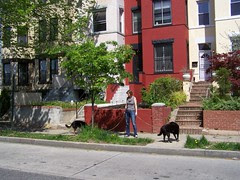 A dog walker in Columbia Heights.

On the concerned4dcps e-list there has been spirited discussion about "dog parks" in public spaces, which some see as a plot by whitey somehow--not stated directly but definitely seen as an unwelcome sign of neighborhood change, along with yoga studios (see "Breathing New Rhythm Into Tired Streets" from the Washington Post in 2006) and restaurants selling Tex-Mex cuisine.

I am not a dog person myself, but I am deeply appreciative of well-managed dog parks because in many urban neighborhoods, dog owners are some of the only regularly walking people in a community--many neighborhoods outside of the inner core of Washington are dominated by automobiles and there is relatively little positive pedestrian activity on often empty sidewalks.

Dog walkers contribute positive activity not just to streets and sidewalks but to parks. It's very easy for a park to devolve into a dangerous place. One technique for people committed to disorder to keep people (especially families and children generally) out of parks is to break a lot of bottles--broken glass keeps a park free of children, making it easier to conduct illicit business and activities.

Dog walkers help rebuild neighborhood groups committed to providing support and focus to neighborhood parks--parks that often are willfully or passively neglected by municipal governments overwhelmed by a variety of responsibilities, and lacking the resources to be able to provide regular maintenance and assistance and supervision.

Anyway, Sue wrote this, and allows it to be reprinted here:

Dog parks and crime aside, Susan's original point was an important one. Local institutions create a fabric of natural/casual/ recurrent interactions that foster community. When the kids in a neighborhood go to a variety of different schools, then the adults in the neighborhood are less likely to get to know each other well.

I often think that Tenleytown's rich associational life is built around its institutional core -- especially the schools, but also the churches and the library. By contrast, in Friendship Heights, whose center is commercial (and commercial on a regional scale), more people are strangers to each other and there aren't really any enduring community groups. In my block alone, the children go to three different elementary schools. School is another thing that scatters us (we all head out at different times and in different directions) rather than brings us together.

By contrast, successful neighborhood schools create a context where a critical mass of people who live near each other routinely and over a period of years work together on various projects and have a shared stake in something that is "ours" -- not just "mine." And they routinely bring new residents into the fold in ways that extend and reproduce community over time.

DCPS's failures put city dwellers more in rats-fleeing- a-sinking- ship (for any port in a storm, to mix a few metaphors!). The huge overhead William mentioned (with respect to transportation) keeps us all away from our neighborhoods longer each day and gives us less free time for activities beyond the essential daily grind.

One of the posters to whom I vehemently responded argued that it makes more sense to put cops on the streets than to provide dog parks. Now it costs about $250,000/year to support a police officer. And in any case, said police officer doesn't provide 24/7/365 presence in a particular neighborhood.

I often say that there is a reason that DC neighborhoods are "f"lawed up" beyond the reality of decades of underinvestment. It's because of how neighborhood leadership fails to address community building and capacity building and looks to others to solve their problems

As long as you expect government to take care of you, to not invest--in time mostly but also money--in your own neighborhood, you and your neighborhood are doomed.

The failure to focus on the nexus of school and neighborhood in dealing with the challenge of improving the local school system likely means the failure of both community and schools, because it is expected that somehow each is disconnected, and that the power of school and the power of community should not be leveraged, synthesized and intertwined, but forever remain separate

Very nice post. I definitely appreciate this site. Stick with it!
http://www.kuwait.prokr.net/
http://www.emirates.prokr.net/