Aldi in the 'hood

Frozen Tropics has an entry about the Aldi supermarket company opening a store at Hechinger Mall, in part of the space abandoned with the closing of the National Wholesale Liquidators store there. WBJ also has the story, "Aldi grocery headed to D.C.?."

While I am not a fan of Aldi, I do occasionally buy staples there, especially their dishwashing detergent, which we favor. Since we mostly buy unprocessed foods, we wouldn't do a lot of shopping there as we don't need Aldi-brand frosted flakes since we don't buy Kellogg frosted flakes. But I am just as happy consuming inexpensive brown or honey mustard from Aldi as from a name brand...

The comment thread in the FT piece is interesting. Of course, more people want upscale retail options and so most of the comments are negative, although there are pearls of wisdom mixed in. The reality is that retailers aren't leaders of neighborhood change, at best they are followers, except in very exceptional circumstances.

For example, the East Liberty neighborhood in Pittsburgh is adjacent to two of the most upscale neighborhoods in the city, and neither has significant amounts of available land for redevelopment, hence the location of stores like Whole Foods, Borders, and Trader Joe's into East Liberty, see "East Liberty On The Rebound" from KDKA-TV).

It's worth reprinting this blog entry originally from 2005, "Why the future of urban retail isn't chains". I'd write this a bit differently now, or title it differently, something along the lines of differentiated urban retail districts aren't constructed out of chains. However, that doesn't mean that there isn't a role for retail chains in the city, especially for regionally serving shopping districts.

The retail mix for a commercial district is dependent on a variety of factors. In the context of the H Street neighborhood, the Census data still shows a demand for lower price convenience goods. It will be sometime before the overall trend of the data changes.

From Business Week, "The New Science of Siting Stores: Thanks to complex mapping and demographic tools, retailers can now find the perfect location in a fraction of the time it used to take"

"It used to be that when IHOP wanted to open a new restaurant, the chain would hire a real estate agent to drive around and collect information on potential neighborhoods. The agent would see if a lot of single-family houses were nearby, how many other restaurants were located there, the presence of a large mall or retailer, and would also gauge traffic patterns. The entire process would take several weeks.

Nowadays, the resulting reams of data that just 15 years ago would have taken a week to analyze even on a supercomputer take only a few seconds to crunch on modern equipment. The growth of the Internet has had a big effect as well: Retail execs can sit in their offices and run data on potential store locations with Web-based software. With today's technology, "retailers identify their sites much quicker, so they can grow quicker and make fewer mistakes," says Adam Epstein, president of Site Analytics, a New York tech outfit that has provided analysis for restaurants and stores such as Chili's, Cosi, and Ben & Jerry's. (...) 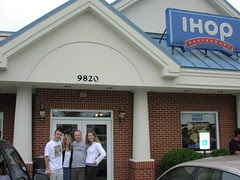 Is Brentwood ready for an IHOP?

A CHOICE SPOT. At IHOP, it isn't just about saving time. The chain uses the technology to measure population density and how many homes around a potential location are occupied by families, the restaurant chain's primary customer base on weekends. It also analyzes the demographic makeup and the presence of malls and Home Depots, since IHOPs usually benefit from hungry customers who might emerge after shopping several hours.

It also sorts out the types of workplaces located around the area. For instance, industrial and manufacturing sites don't generate as many customers as does an office or a hospital. "The most ideal location would be a free-standing restaurant sitting on the corner of a well-lighted intersection which has four or more lanes, great curb access, and sitting right in front of a shopping center that doesn't have a restaurant," says IHOP's Rick Celio, vice-president for franchise and development at the 1,100 restaurant chain.

With today's software, Celio doesn't have to drive around the country to pick the perfect spot anymore.
__________
Maybe I am wrong, and the aggressive suburbanizing of the urban fabric is the way to go to attract chain restaurants and other retail... Read the entire article, and then you'll have a much better idea about the process of attracting retail businesses to traditional commercial districts--downtown or in the neighborhoods. It's difficult, which is why I keep suggesting that we focus on the development of independent businesses.

It's also difficult to get suburban-oriented chains to think about urban-appropriate designs rather than the suburban formats that they are comfortable with. Giant Supermarket at Brentwood (at 9th and O Streets), and in Tivoli Square is a case in point. 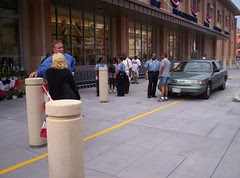 Is this Giant at Tivoli Square, or somewhere on Rockville Pike?

I am glad to discover this page. I have to thank you for the time I spent on this especially great reading !! I really liked each part and also bookmarked you for new information on your site.
Data Science Training in Chennai