Biking as a socialist whitey plot...

The bicycles with baskets in this photo are bcycle shared bikes from the Denver system. Bcycle photo.

Other news sources have repeated the story out of Denver that one of the candidates for governor called expanding biking a socialist plot. See "Colo. gov. hopeful Maes says bike share threatens 'personal freedoms'" from the Boston Herald. Today's Post has a column on the upcoming mayoral election and the stakes, "Campaign like it's 1994 ." From the article:

... And as a result, Fenty -- like Kelly -- is seeking reelection without the support of those who have traditionally played important roles in the city's political life: government workers and their unions, families, friends and churches. He's struggling to regain the support of longtime middle-class and working-class residents who feel they have been relegated to second place by an administration that caters to, and is under the influence of, that old race and class bugaboo: "others."

That sentiment has been reflected in the polls. It was also on display this week at the Lamond-Riggs Citizens Association's mayoral and council chairman forums, which I moderated on Tuesday, and at the chaotic Ward 4 Democrats forum and straw poll Wednesday night.

In questions submitted by the audience, and in barbs hurled at the mayor by lesser-known mayoral candidates, three expressions of derision directed toward Fenty were used almost interchangeably: "The Washington Post" (which endorsed him), "dog parks" and "bike lanes" (both of which he champions). These are three thinly disguised code words for white influence. They also reflect a mind-set that holds that the city's dwindling black majority is being kicked to the curb. 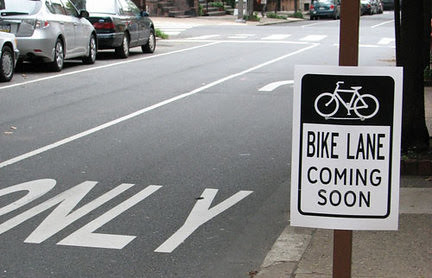 In my spam e-box I got a long screed about the election and how people like Mayor Fenty are leading the whitey takeover of the city. I wrote about this kind of belief in a post from 2005 about the 2004 election cycle. See "Tom Sherwood, Duncan Spencer, Anwar Amal, and thinking about what I call the 'Uncivil War'." 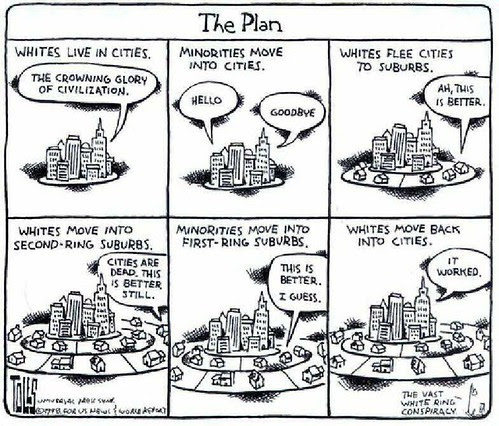 I don't really know what to say about this. It's true that people in cities in the U.S. tend to be white, middle and upper class people, with higher incomes, along with motivated people, often from the Hispanic demographic, who make less money and use bicycles because it is a much less expensive form of transportation not bounded by transit schedules.

At the same time, how do you assert that trends are "white" or "black" or whatever?

I remember having arguments when I was involved in H Street NE revitalization issues in the early part of the last decade, when people would argue that suburban style developments (such as Wendy's drive throughs and strip shopping centers) should be encouraged and supported in the urban context because what happens in the suburbs is by definition, a good thing.

Later I wrote about the white-black attitude toward urban revitalization in a series of posts:

And note that my take on urban commercial district Main Street revitalization is that it is hardest to achieve in hetereogeneous places--read that as either or both racially and economically diverse. The center city commercial districts that have been most successful at revitalization tend to not be "diverse" racially and economically. They are predominately something. It doesn't have to be white, but homogeneity with higher income makes a big difference when you are trying to come to consensus and make hard choices.

And for a long time I have written that fears of what people call gentrification are really about change, and the influx of different people (age, race, level of educational attainment, income, sexual preferences, etc.) and this generating a fear response. From "More about contested spaces--gentrification":

I don't like to use the word "gentrification," because it's usually used in a pejorative way, and because it gets in the way of specificity, in figuring out what someone is talking about, and makes it difficult to accurately respond from a policy perspective.

For what it's worth, this is something I wrote about displacement effects in a new urbanism forum. Gentrification effect (2) is what I think people really mean when they are talking about "gentrification," new and different people coming into a neighborhood. Of course, in neighborhoods like CH, displacement is really happening.

As far as displacement goes, it's part of what people call "gentrification". But gentrification is phenomenon with multiple effects, which I describe as:

(2) change and different people coming into a neighborhood -- most importantly, different people from those currently in residence (the differences--race, class, ethnicity, levels of educational attainment, attitudes toward the urban experience, etc.--are usually not "celebrated" (I make this point because I still remember first being taught about diversity and multiculturalism in 7th grade, and I specifically remember the "melting pot" and "celebration of differences" phrase -- I have a hard time seeing the celebration, at least in DC); ....
--------------
Anyway, the real issue is change, and in the case of center cities, applying appropriately urban solutions to urban settings.

As Colbert King says in the aforementioned column:

The rap on Fenty is the same as the one on Kelly: The mayor is marching to the beat of a different drummer, certainly not the beat of residents who put him in office. The Barry vote in '94, in one respect, was a thumbing of the nose at downtown and the better-off west of Rock Creek Park. The same "we'll show them" strain can also be heard in the support for Gray.

This is not something to cheer but to regret. Not out of sympathy for Fenty. But out of concern for a city so trapped in its past that it can't see the problems before its face -- problems that are neither black nor white.

It's not a white thing, it's not a black thing. It's a city thing.

But tell that to people who have to make the change.