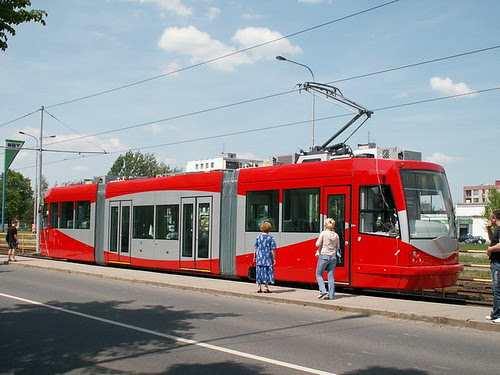 If only I had Photoshop... imagine the insertion of this streetcar (shown here is one of the DC streetcars being tested in Ostrava, Czech Republic (taken by Michal Rusek, a Czech transit enthusiast, and available on his website). Second photo: Google Streetview, 400 block of H Street NE, south side. 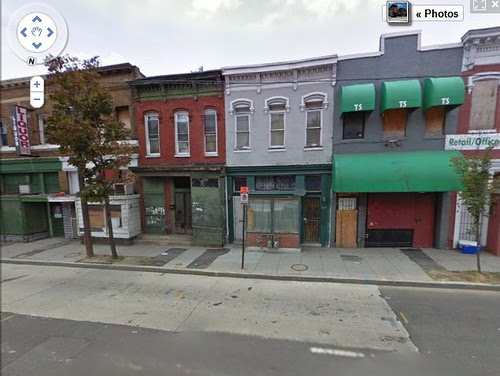 A year or more ago, I was walking on H Street, and a business owner collared me and asked me what I thought of the streetcar.
I said that of course I supported it, that yes it sucked while the streetscape (and the installation of rails) was being reconstructed, but think of this: H Street would be the first place on the East Coast to have modern streetcars, and that you should think about that in terms of the positive impact on your businesses and/or properties you own.
After I wrote earlier in the week about Tysons Corner and the subway and the enormity of the changes that are coming to that part of Fairfax County as it reorients and repositions around transit access, Suzanne and I were talking about this yesterday and I realized that the same kind of enormity of change will occur on H Street, and it will be at a scale and speed far beyond which I have already been thinking about. I don't italicize the word enormity lightly.
(And note that the major things happening on H Street today, the Joe Englert nightlife scene, which then led to a repositioning of H Street NE as a place for food-oriented establishments to open, and the district is becoming a destination in and of itself positioned around consumable faux edginess, plus the streetcar, those of us who initiated the H Street Main Street program in 2001 never imagined.)
There is a relatively big difference between the areas of Portland and Seattle that are served by the same kinds of streetcars that will serve DC, and in particular, H Street.
Portland's Streetcar system was built to support the conversion of a massive "abandoned" railyard (not unlike how the old Richmond, Fredericksburg & Potomac railyard is now Arlington-Alexandria's Potomac Yards development) into what is now called the Pearl District. Similarly, Paul Allen wanted a streetcar system in Seattle to help push forward his property redevelopment venture in the South Lake Union district.
From the standpoint of a "build out analysis" (Crandall-Arambula Revitalizing Cities Series one page description of a build out analysis program) the Pearl District and South Lake Union areas have a much greater opportunity to build than do most of the areas impacted by the coming of streetcar service in DC.
However, both the H Street/Benning Road corridor and parts of Anacostia have tremendous potential for build out, even if not at the scale of equivalent districts in Portland and Seattle.
And, the "fashion" and newness of the streetcar will likely further drive the continued development of H Street as an restaurant, entertainment, and retail district, to a new phase that likely isn't imaginable now. 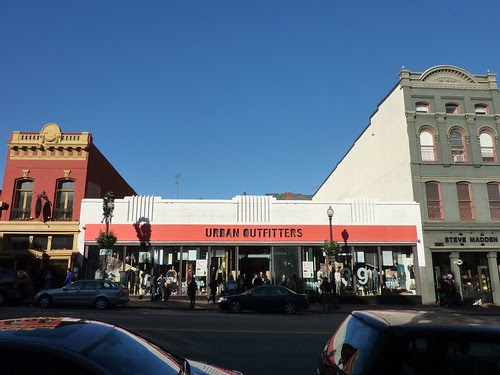 With the streetcar, will H Street retail become more like Georgetown? Flickr photo of Urban Outfitters and Steve Madden retail stores on M Street NW by TheFUNKYMAN.
As the H Street area adds housing (e.g., unbuilt projects on the 300 block, 600 block, 800/900 block, at 4th and I, the Clark Realty Development at the old Sears site, potential redevelopment of Hechinger Mall, and the northernmost parking lots of RFK Stadium), complemented by development along 2nd Street NE and over the Union Station railyard (Burnham Place will have 3 million s.f. of mixed use development) the ability to support quality retail will change too.
(Ironically, I suggested in 2003 that H Street Main Street develop a housing policy and program.) 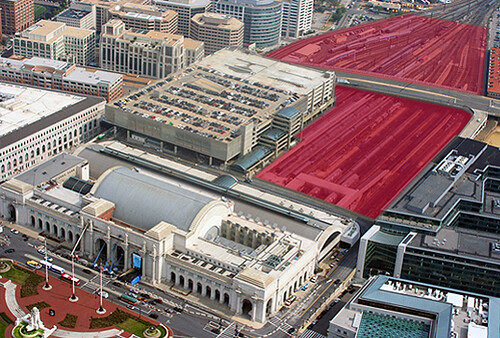 Aerial showing where the Burnham Place development will be constructed.
And ideas we had years ago, imagining stores like Barnes & Noble taking up space in the office buildings on the 600 block, could become reality, but because of changes that we couldn't have foreseen.
When I use the phrase velocity of change, I am referring to a couple things. First, Jane Jacobs talks about the velocity of change in her discussion of slumming and unslumming neighborhoods in Death and Life of Great American Cities, but it is a subtle discussion and difficult to understand.
Second, I think about the velocity of real estate development driven change in DC over the period from 2003-2008, which was unimaginable on the part of most community advocates (but probably was in fact the agenda of real estate developers). This was a direct result of the replacement of Marion Barry as Mayor, by the election of Anthony Williams.
This made DC much more predictable and desirable as a place to invest risk capital, given the presence of the federal government is always going to make the real estate market here relatively attractive. The political change was hugely important.
It took a few years to begin righting municipal institutions and to improve the quality of municipal service delivery, combined with the fortuitous reaching of critical mass development of a willingness to live in the city, along with development projects to start being delivered before the impact of this change became visible, but then it was very visible and very obvious and too late for advocates to respond, to be anything other than reactive.
The change that will happen on H Street with the introduction of the streetcar will be similarly dramatic. I can't predict what will happen, but I know that many interesting things are likely to develop, stores that I can't imagine now--such as a Design Within Reach or a CB2--could arrive, and H Street could become one of the region's distinctive shopping destinations once again. Probably there hasn't been enough planning, even though there has been a lot, more than for most of the city's commercial districts, other than the central business district.
Today the H Street district is mostly food and nightlife and seemingly edgy.
The challenge for the district will be to remain edgy and interesting as the streetcar reproduces the value of property and the retail offer goes broader, deeper, and more upscale.
I guarantee you that it will be quite a ride and will take a decade or more to play out.