Misplaced priorities: threatening Walmart if they don't open another store 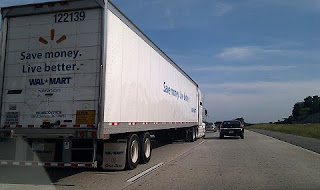 Today's Post tells us in "Gray to Wal-Mart: It’s all or nothing," that Mayor Vincent Gray threatens to deny Walmart stores building permits--not because two, maybe three of the projects, have significant problems in terms of how the sites will be developed, the lack of transportation capacity to serve the stores, and whether or not Walmart is committed to developing urban-appropriate operations and customer service practices--but because four Walmart stores aren't enough for Washington, DC, he wants Walmart to open a fifth store, in the Skyland Shopping Center in Ward 7. All or nothing...

D.C. Mayor Vincent C. Gray delivered an ultimatum in a face-to-face meeting with Wal-Mart officials at a real estate convention here Monday: If the chain wants to enter the District at all, it had better commit to opening at Skyland Shopping Center, the long-delayed redevelopment project in Gray’s home ward that he considers the most important development project in the city. ...

“They’re interested in developing four stores,” the mayor said in an interview after the meeting. “All of us said, ‘What about a fifth store?’ They hemmed and hawed, and it ultimately came down to — you have a choice. You can do five stores or you can do no stores.”

Wal-Mart does not require major zoning changes or subsidies to open any of its first four stores, but two are on publicly owned land, giving the city a measure of control. Gray indicated he would be willing to go so far as to nix the company’s requests for building permits on privately owned sites, even for neighborhoods where residents favored Wal-Mart’s opening.

Talk about focusing on what's important to the city's quality of life--not transportation, not urban design, not mixed use development in commercial districts, not mitigation of evident problems in advance of the opening of the stores--but that the city needs to see a commitment for a fifth store in the city, five or nothing!

I guess puffery makes elected officials feel important. But the misplaced priorities really suck. And in the end, if and when the boast doesn't come through, doesn't it make the person look foolish? Of course, maybe no one remembers.