So says the Washington City Paper Housing Complex blog. From the article:
Right now, the line from the Petworth to the Takoma metro stops is in Phase 2 of the still-entirely-conceptual overall system plan. But at tonight's Walter Reed Local Redevelopment Authority Committee meeting, director Eric Jenkins said they're considering moving it up into Phase 1, along with tracks from Union Station to Washington Circle and up 14th Street, over to Georgia Avenue, and up to the Petworth metro stop. That may have just gotten a little easier, with the Anacostia line having been delayed by complications with the 11th Street Bridge.

The reason this is ironic is that the failure to plan for the streetcar was a key element in the discussion and recommendations made by the ANC4B committee that was created to address and respond to the Large Tract Review process for the "Walmart" site on the 5900 block of Georgia Avenue NW. 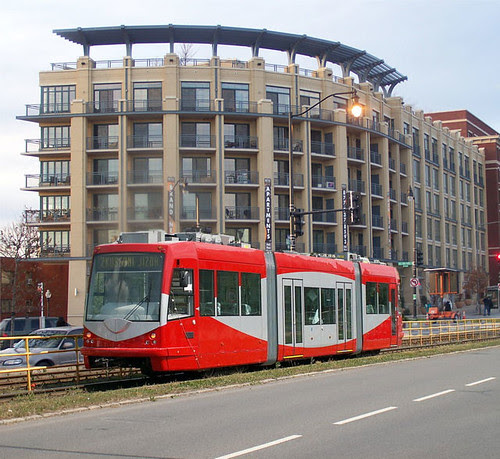 A photo simulation done for us by an "anonymous" graphic artist. We know it's not right exactly, but we were working with extant images and didn't have a lot of time.
Our points were multiple. From the ANC4B Large Tract Review Committee report:

Georgia Avenue Streetcar Service. As discussed on pages 3-4 above and depicted in an image simulation on page 16, current and future development activity projected to occur on upper Georgia Avenue, including a massive redevelopment of the Walter Reed Hospital site into a mixed use development covering portions of 60 acres, justifies reinstituting streetcar service on Georgia Avenue, which is already part of DDOT’s long range planning.

However, planning for streetcar service on Georgia Avenue isn’t underway currently. Whereas on H Street NE, streetcar tracks were installed as part of the streetscape improvement program, admittedly, after a focused lobbying campaign initiated by ANC6A, the fact that the Georgia Avenue Great Streets construction project currently underway in Petworth, between Webster Street and Otis Place, hasn't included installation of streetcar tracks as part of the design, engineering, and construction process is an example of poor coordination between DDOT programs and failures in long range planning.

Given the plans for future development in the corridor, streetcar service planning for Georgia Avenue should be reprioritized, and more detailed planning, design, and engineering activities should commence forthwith.

Instead, service to both points (and Montgomery County should be encouraged to plan for and fund extension of service beyond both termination points further into the county) should be part of a streetcar service plan for the Georgia Avenue corridor, because service to Silver Spring should likely contribute significantly to reduction of motor vehicle trips along the Georgia Avenue corridor generated from locations within Montgomery County.

Great Streets Planning. DDOT Great Streets planning has thus far included detailed studies of Petworth and the Gateway section of upper Georgia Avenue, but not the area between Kennedy Street and Walter Reed Hospital, which makes up the “Missouri Avenue-Piney Branch Road” node of the commercial district which Square 2986 anchors. Given the evident development activity in this area, planning for this section of the Georgia Avenue Great Streets Master Plan should no longer be allowed to languish.

Obviously, these are obvious points, given the development-build out opportunities present on Upper Georgia Avenue.
Still, it's too bad that the comments weren't directly acknowledged in the pretty minimal OP and DDOT responses to the LTR report.