(With apologies to Doug Willinger.)
1. Blair Road NW, Washington, DC.
For awhile I have been racking my brain, trying to figure out how to deal with the traffic impasse created as North Capitol Street trickles down into Blair Road, through Takoma, across the Maryland-DC line, to Georgia Avenue.
In the Takoma area the road is two lanes--an old country road--and is backed up for long periods of the day, doesn't make the area very congenial for walking and biking, can be dangerous, especially between Cedar Street and Piney Branch Road where there is no room for bikes and cars to jointly use the road during rush periods, and probably makes it harder to improve the little commercial district at 4th and Blair Streets.
The proposal for the North Central Freeway was supposed to follow the Metropolitan Branch Railroad line--north on the east side of the tracks and south on the west side of the tracks--but this would have destroyed the quality of life in the area (a very short portion of the route under Rhode Island Avenue was proposed to be tunneled).
Doug Willinger (various websites) has always said that a completely tunnelized freeway should have been considered.
While for many reasons, I don't favor big freeways, above- or below- ground, I am starting to think that the only way to address the Blair Road-Takoma conundrum would be to create a tunnel "freeway" for the through traffic focused mostly on getting from Montgomery County to DC's Central Business District.
The Reno (Nevada) Retrac project, where they took an at-grade railroad line and put it below grade, is an example of how it could be done, although I would argue for a completely underground and enclosed system. 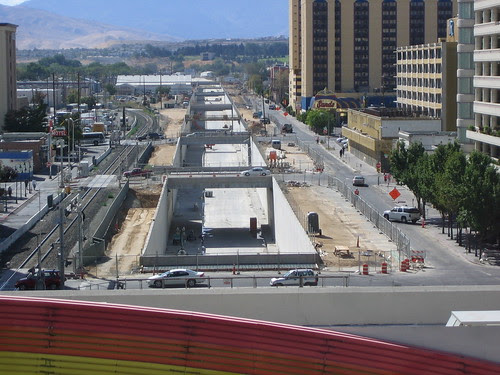 The Carmel Tunnel project in Haifa, Israel is an example of doing something sort of similar. Apparently there were massive traffic problems daily in Haifa, because of a mountain being "in the way" of where people wanted to go. Because they had to go around, traffic jams for most of the day were the result. The article "Tunnel scheme cutting travel times" from Traffic Technology International, briefly describes the project.
To deal with the congestion, they built a tunnel through the mountain. It's paid for by tolls. The price is about $3 for automobiles, $9 for public vehicles, and $15 for trucks.
2. New York Avenue/Route 50 tunnel
As I mentioned over the weekend, the New York Avenue Transportation Plan recognized that the big problem with traffic on New York Avenue is that because the road functions as a through freeway link from I-95 and the Baltimore-Washington Parkway to I-395 in DC, connecting to Virginia, much of the traffic on the road is "through traffic" not intended to stop in DC.
This through traffic makes much of the road--from the DC-Maryland line to Downtown DC--traffic engorged, unsightly, and uncomfortable, with negative contributions to quality of life for residents. 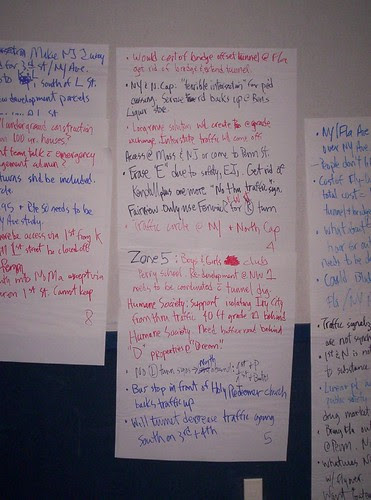 Community comments at a New York Avenue Corridor plan public meetings, 2005.
To deal with it, the planners on the study recommended that a partial tunnel be constructed, from somewhere between Brentwood Road NE and Florida Avenue, connecting to I-395 at New York Avenue, and tunnelizing that connection there. 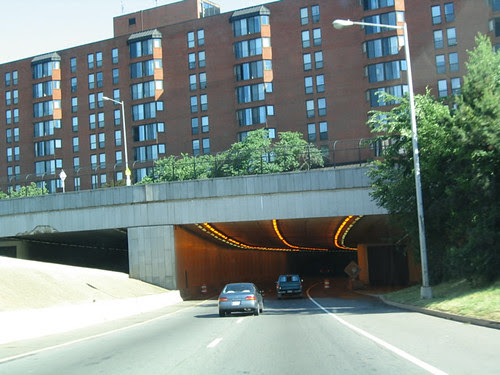 Photo of I-395 going underground at K Street NE from AA Roads.
They didn't go for broke and recommend a complete tunnelized solution from the DC-Maryland line to the I-395/New York Avenue junction, not because they didn't see the need, but because of the cost.
After all, the Central Artery Project ("Big Dig") in Boston cost over $14 billion for 3.5 miles. This length would be about 5 miles.
Still, one way to make it happen would be to charge tolls, just like the Carmel Tunnels project in Haifa.
3. Add a subway line on New York Avenue?
To make a New York Avenue tunnel project even more expensive, they could put a heavy rail subway line into it as well, from Bladensburg Road to Mount Vernon Triangle, although it could be conceived of, in part as a leg of the proposed separated blue line, which would continue west to Georgetown and then into Virginia.
4. General discussion on tolls
Since these tunnels would mostly be focused on serving nonresidents, except in how they would mitigate the negative impact of use of these roads on quality of life, tolling is a logical response, as a way to impose fees on the users for the costs that they normally impose on others without paying.