Unstrategy for economic development in DC 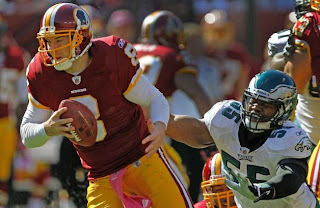 
The DC local government--DC is the national capital, has about 600,000 residents, is part of a metropolitan area with 8.5 million residents, is the center of the region's heavy rail transit system, is still one of the world's strongest commercial real estate markets (although it is softening), and has an $8+ billion budget--does not have a four year strategic plan comparable to that developed by the City of Barrie.

Slide image from the City of Barrie Transit Plan, acknowledging the links between the city's transit policy and the city's Strategic Plan.

The other major DC government disappointment reported in newspapers the past week (in addition to the Councilmembers letter to UDC and the proposed Pedestrian Safety legislation) were the reports that a number of DC's elected officials--Mayor Gray and two Councilmembers, Jack Evans and Michael Brown, went down to Florida to look at the Tampa Bay professional football team practice facility, in hopes that they can waste 20+ acres of the city's land on a similar facility for the Washington Redskins, which currently have their training facility in Ashburn, Virginia.

The trio was headed south to get a behind-the-scenes look of the Tampa Bay Buccaneers' headquarters and practice facilities.

And why, might fans ask, do D.C. officials have the slightest bit of curiosity about the Bucs, who are not on the 'Skins regular-season schedule?

Well, the Bucs' facilities — among the largest in the NFL with three full-length grass practice fields perched on 33 acres of land — and Washington is economically and socially jealous.

In other words, city officials appear to be finally getting their ducks in a row to lure the Washington Redskins back to, well, Washington.

This is so economically ridiculous that I can't think straight. Apparently the idea is to use a bunch of land in "Reservation 13," the large tract of land somewhat adjacent to the RFK Stadium Complex and on the edge of Capitol Hill.

The City developed a master plan for the site and put out development rights for bid, but with the 2008 real estate depression, plans for the site--like Poplar Point in Anacostia, the Armed Forces Retirement Home, previous plans to create the "Arboretum Place" development along New York Avenue NE, the Skyland shopping center redevelopment etc.--have ground to a halt.

From the first WBJ article:

Officials in Albert's office, which now handles AWC projects, said they plan to largely stick to the AWC plan for the area, but rather than divvying individual parcels will seek a master developer to drive the project.

(Note that plans for the McMillan Reservoir site continue to move forward, slowly, and plans for the redevelopment of a 60 acre portion of the Walter Reed Hospital site on Georgia Avenue in upper northwest have jumped ahead of the St. Elizabeth's campus, Poplar Point, AFRH, Skyland, and Reservation 13 in the line up of developments likely to break ground within the next 5 years.)

Apparently--albeit without a plan--the Mayor thinks that giving the Redskins football team 20 to 30 free acres of land for a football practice facility that would generate relatively little tax revenue is economic development.

Some time ago, I reprinted a slide from a presentation to the Sarasota County, Florida Board of Commissioners, which showed the tax revenues received from an acre of land depending on the type and intensity of the development.

This slide is not fully applicable to Washington, DC, because DC also reaps 100% of the income tax revenues from citizens, which isn't the case for other local jurisdictions anywhere else in the country, but still you get the idea.

Intensive and mixed use of land pays off a lot better than would a practice facility for a professional sports team, especially when it is likely that most of the team's personnel (owners, managers and staff, and players) won't live in the city and therefore won't generate tax revenues.

If the City had a strategic plan ...

If the City used metrics, including tax revenue generated per acre, to score and prioritize the various wack job proposals that comes their way ...

Then this "idea" would have to be judged as a no go.

But DC isn't St. Louis or Detroit--at least so long as the quality of the DC Government, both in terms of elected and appointed officials, doesn't continue to degrade, and right now the jury is out on that determination--so it can afford to take its time and not go ahead with boneheaded development plans that provide little economic return to the city.

I don't know enough of the details to figure out how much the Redskins training facility in Ashburn, Virginia is assessed at, but compared to 20 acres of mixed use development in the center city, it can't be that much...

Mockup of a logo of the Loudoun County-Washington Redskins marketing considerations contract. Typically the Redskins only allow marketing partners to co-brand if they spend at least $1 million annually on team-related initiatives.

Plus, the Redskins will try to make money off DC, not generate money for DC. For example, in Loudoun County, the County pays the Redskins $150,000/year for various "marketing benefits."