Why it's hard to (holiday) shop in DC's neighborhood retail districts 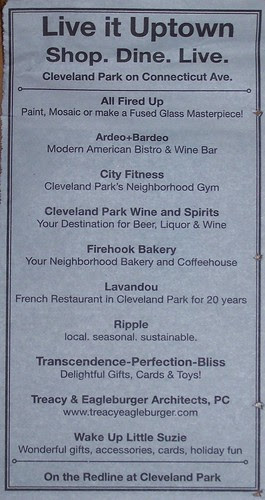 ... there just isn't that much retail. According to the ads shown here, there are 2 retail stores and 1 attraction featured in an ad on Cleveland Park, and 4 stores, two very specialized--bikes and animals--in the ad for Barracks Row Main Street on Capitol Hill. (I know there are more non-food retailers in these districts, but not that many more.)
Part of the problem is that there are more extant neighborhood commercial districts and therefore spaces in DC than there is demand, based on the nature of today's shopping patterns.
So only a few places can be successful, unless they get many non-immediate residents as customers.
And the rents generally are too high for independent retailers to be able to be successful--which is why retail spots tend to turn over.
At the same time, since Washington residents consume meals out-of-home at a rate higher than the national average, restaurants can be successful, especially in neighborhood commercial districts, like Barracks Row in southeast DC, which so far also benefits from there being minimal alternatives near the Washington Nationals baseball stadium, and Cleveland Park.
So ads from Barracks Row and Cleveland Park promoting their districts as places to shop while important, are somewhat misleading, because these places are not commercial districts for shopping so much as they are places to go out to eat.
I have hundreds of posts in my blog on this general topic, but these are some of the most important:

- "Why ask why? Because," from 2007 about analyzing failure in neighborhood commercial districts, and building robust operations within retailers

- "Independent retailers can succeed and thrive" from 2008

- "Retail and Restaurant Check Up Surveys" from 2009, about methods for analyzing individual businesses

I know I maybe over-extend the idea of the Reilly Law of Retail Gravitation somewhat, which was originally developed to explain why some (market) towns developed over others. But the general point is still relevant--population, transportation efficiency, civic attractions (i.e., Courthouse) are contributors to the development of market centers, and the places with more and better retail and attractions are the places that are preferred.

One of the biggest issues in DC has to do with how DC values commercial properties. Commercial properties in DC's corridors (like Georgia Avenue) and traditional commercial districts (like Takoma) tend to be overvalued based on the revenue generating capability of the property, thereby making rents much higher than what they should be, in terms of generating successful retail.

This comes about because the real estate development and ownership market in Downtown and key submarkets is a national and international market, and commercial properties all across the city tend to be valued if they can be purchased by a national-international actor.

It's the biggest reason why independent retail districts tend to fail in DC, as DC rents are 50% to 150% higher than they are in successful independent districts in other places (such as Richmond, Philadelphia, Baltimore, and Frederick). It's also why retailers, as opposed to restaurants, tend to fail--restaurants can pay higher rents because people eat food more frequently than they purchase apparel, furniture, watches, books, etc.

- This entry from 2007, using the example of the Takoma Theatre, "Avoiding the real problem with DC's property tax assessment methodologies" is one of many that discusses the tax issue.

These two entries from 2009 on Cleveland Park explain the rents issue in more detail, including the economics:

- "Cleveland Park Retail, my off-hand assessment is that the rents are too high"
- "Commercial retail rents #2"

I have testified about this issue a few times, and each time the City Council has militant refused to acknowledge the argument.

Speaking of small business and ward 4, the effect of Walmart's entry won't just be as a chain very big business with incredibly great purchasing power allowing them to sell goods at lower prices than independent businesses can buy at wholesale, the other impact will be that other chain stores will be drawn to Walmart's proximity, and more independent businesses will be crowded out, as the retail environment within the ward "chains up."
I do think it's possible to significantly improve the climate for independent retail in DC, but it will be almost impossible to achieve as long as commercial properties are taxed at values higher than their revenue capability warrants.