Housing segregation in DC: is it more about class than race? 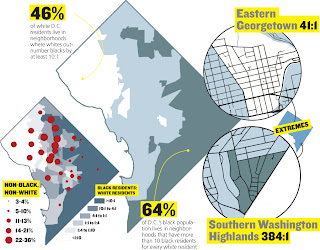 Last week's City Paper has a little article and nice graphic, "Apart and Parcel: What Housing Segregation in D.C. Looks Like."  It says:

The persistence of black-white residential segregation reflects the nation’s inability to fully overcome the legacy of slavery, and it negatively affects education attainment, race relations, and productivity. Despite nearly a century of legal and legislative struggles to integrate our blocks, segregation by race is still the norm in the District.

But I think it's tricky, analyzing housing segregation in the city, which exists, because poverty oftentimes masks race.

In the US, we are not big on economic class as an analytical tool, and too often we consider race as the appropriate analytical substitute.

1.  In DC, the most persistently segregated neighborhoods are either of high or extremely low income.

2.  DC has lots of poor African-Americans, but not many poor White people, but some relatively poor Latinos.  So extremely impoverished neighborhoods in DC are likely to be black dominated, not unlike Detroit, which is almost 90% African-American.

3.  DC neighborhoods with well off residents are likely to be white dominated, not because African-Americans don't have money, but because African-Americans of means have tended to move out of the city, and because more generally, African-Americans, unlike the people who watched the tv show Friends, still don't see the center cities as a premium place to live.  (Also see "Commerz in the 'hood... (aka "Commerce as the engine of urbanism")" from 2006 and "Too early to say what the special election in Ward 5 means: but change is coming regardless" from May.) 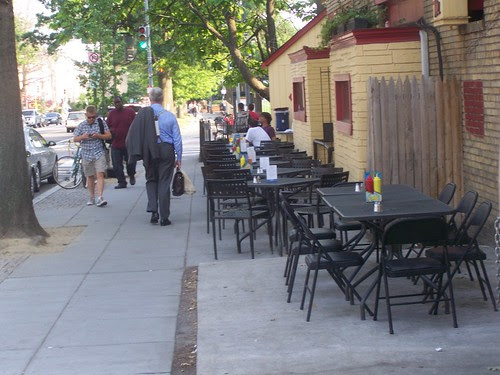 4.  Segregation is also abetted by the neighborhoods where new residents prefer to live, in the core of the city, places like Dupont Circle, Columbia Heights, H Street, Capitol Hill, Downtown.  (When I told someone high up in DC Government where I lived, s/he was derisive, because it isn't a happening place.)  So white places get whiter.

City neighborhoods on the outskirts of the city tend to be either black or white without a lot of mixing, reflecting residential trends dominant in the 1970s.  Now, African-Americans are mostly leaving the city and whites and Latinos are slowly trickling in, such as in Ward 4, which over the last 10 years lost 10,000 African-American residents, and gained 11,000 whites and Latinos.  See "Gentrification and the 'hood: continued."

This trend will solidify because comparatively speaking, the houses are cheaper in neighborhoods like Petworth and Brightwood than they are in the core, and the price attractiveness will lead to more in-migration of whites and Latinos.  (As I have said before, in my neighborhood, with just a few exceptions, houses that come on the market are sold to white or Latino or mixed race households, not African-American families.)

Thank you for providing such a valuable information and thanks for sharing this matter to get Online medicine store from Dose Pharmacy medicine.