A couple weeks before, the City Paper excoriated the DCLRP in a cover story, "Wreck-It Ralph: How Nader became DC libraries' biggest headache," mostly focusing on how the group is funded by Ralph Nader, that Nader is a "gadfly" but without much in the way of content.
____________
Disclosure:  I am a supporter of DCLRP and its positions on library issues generally, even if I am not always in 100% in agreement about specifics.  I agree with their position on the amount of money DC receives from the sale of properties in the West End, including the West End Library, is probably inadequate and I agree with their position that it is a bad idea to mix for profit space in an expansion of the MLK Central Library building envelope.

And had I had more notice I would have gone to the meeting, joined the Friends group, and voted for Robin.

Disclosure/2:  My first DC job was for the Center for Science in the Public Interest, a group not directly affiliated with Ralph Nader, but with direct lineage--the three founders met while working for Ralph Nader.
____________

The headline of the article states that the DCLRP is against "mixed use."

I don't speak for DCLRP but my understanding is that isn't their position.

While my intent has been to write a much longer piece on this topic, the headline of the WCP piece and some of the comments helped me to clarify my own thinking about the MLK Library in terms of "mixed use" vs. "not mixed use," "civic use," "for profit use," and "knowledge/media/information use."

In fact, it is only through an archives search that I was reminded that I testified on this verysame issue back in 2006.  See "Today's Library hearing testimony."

And I have not stopped paying attention to this issue.  See "The DC Central Library, the Civic identity and the public realm" (2011) and "The Salt Lake City Central Library is absolutely incredible" (2013).

The City Paper and previous writings in GGW and the area advocacy group the Coalition of Smart Growth argue that "mixed use" means specifically for profit use that is unrelated to the information-knowledge-culture-media-civic function.

What DCLRP (and I) argues is that it is fine to have mixed uses in a library building or complex, but the uses should be either civic or knowledge-media-information-culture related, which doesn't necessarily preclude "for profit uses" so long as they are related to these kinds of functions.

For example, the Salt Lake City Library has mixed uses in its building and site footprint.  (1) there is a museum in the old library, which is a nonprofit.  (2) there is the local NPR affiliate, .KCPW.  (3) the Community Writing Center, a project of the Salt Lake Community College, has an office there.  (4)  There is the Library Store, run by the Library.  (5)  There is a gallery run as a small business.  (6) There is a restaurant and a separate coffee bar, which are for profit businesses. 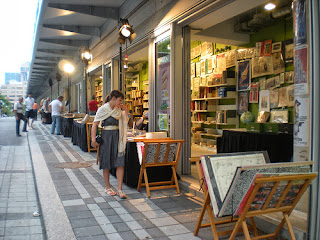 In Montreal, the Bibliothèque et Archives nationales du Québec,  has set up the back side of its building to accommodate small booksellers, which they call the Allee des Bouquinistes.

Myself, I have suggested that the DC Central Library should be expanded not only with an auditorium that is decent, but could even include a theater company like at the Shirlington Library in Arlington County, Virginia and city museum, city archives, and potentially a city visitor center.

See "More thoughts about broadening how we think about 'The Central Library'"from 2006 and "A follow up point about "local" library planning and "access to knowledge" from 2013.

DCLRP has suggested that culture-information facilities such as the DC Archives could be co-located in an expanded Central Library building.

I have also suggested in conversations with Robin Diener that publishers, bookstores, and other for profit but knowledge-culture-media related organizations could be located there as well, such as publishers or media production firms.

This kind of mixed use would not likely result in the professed desire to expand the building to for profits able to pay market rate uses which would generate revenue to pay for the improvements, but it would leverage the intent of the building as a center of a (in this case, DC) city's efforts to support knowledge and presumably the creative industries.

The other question is whether or not DC is "so broke" that it can't afford to fix the library and keep it a 100% culture-knowledge related civic asset, even though it generates hundreds of millions of dollars of financial surpluses and while others in city government seem to think it's important to provide hundreds of millions of dollars of consideration for a soccer stadium ("DC United soccer stadium opponents launch “Winning Goal" campaign," Washington Post).

These are important questions, the role of civil society in the face of what our friends in Vienna call "marketization" and how we treat one of the city's most essential civic assets, the central library, going forward.

-----
Note that while visiting Gettysburg, reading the local newspapers, I learned that in Hanover, Pennsylvania, the Borough Commissioners had closed the children's library in favor of a proposal of renting the second floor of the library building to a special events and catering business, although it turns out the deed transfer agreement for the site precludes such use.  See "Hanover Borough vows to put library back together" from the Hanover Evening Sun.

DC is not financially up against the wall, like many small localities in states like Pennsylvania, Ohio, and Michigan.

We should not rent space out to unrelated uses from within our Central Library building footprint.

DC's Mies MLK library building is an ugly piece of garbage compared to this masterpiece in Chicago; http://en.wikipedia.org/wiki/Harold_Washington_Library
we need to stop the modernist charade and go back to incorporating art- sculpture into the architecture instead of allowing the architect to call him/herself "a sculptor" which is always a colpete cop out and results in more ugliness. DC deserves better buildings and we need fewer boxes. Im am disgusted with boxes and flat rooftops in DC. It is so damned boring.

Seems like the BANQ outdoor market could work at MLK. The outdoor area at MLK is underutilized as a potential public space with shade and shelter.

Complaints at MLK unnecessarily focus on the architecture, when the biggest problems are: homeless people, maintenance, furniture needs rearranging. The Chicago library admired by anon above features sculpture by sculptor who's work was derided by same anon just a few weeks ago.

Actually, the Harold Washington Library isn't all that great up close. It's not bad, but it isn't stupendous.

I liked the NYPL science and business branch in the old Gimbel's dept. store better.

But yep, in another posting I made the point that it isn't the architecture so much as the program, except that Mies was good at office buildings, and a library doesn't fit into an office building that well.

Mies was not an architect any more than Ronald McDonald was a soap opera movie star- Mies was the first among "developers" and he had basically one design that he used all over the world no matter what the climate or topography- and he lopped off or added stories to it to make it function. His buildings are the most absent minded abhorrent and ugly abberations ever done in our major cities and they are just plain BAD. Why anyone would defend such a horrible human being and lousy space planner is beyond understanding. The same goes for Gropius and Johnson. They are all the same ilk.

Thanks for this post.
Visit here - buy medicine online from Online medicine store.