Joel Kotkin has a piece in Forbes Magazine, "Where Are The Boomers Headed? Not Back To The City," stating that it's urban legend that older boomers are flocking to the center city, and that suburbs will have to take care of their aging population.

I think he mis-states what pro-city people are saying about the trend and the velocity of people moving back to the city.

People of all ages, including the aged, are moving back to the city. But it's about percentages and trends.

See the past blog entry ".Get Urban 2.0: DC continues to add population" which discussed this point in 2012.

In short, the millions of people who moved to the suburbs from the 1950s to the 1970s who are now 40 to 60 years older, are not moving back to the city at the same rate they left the city--which is a good thing for those of us in the city. 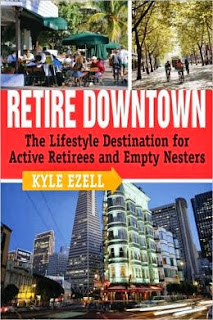 But enough people are moving to the city so that it's noticeable--and undeniable--and this has been going on for more than 10 years--I remember being first exposed to the concept at a conference in 2003, and that person (the director of the Responsible Hospitality Institute) had been on the circuit making the same point for a few years at that time.

And yes, suburbs are screwed because they have to build an infrastructure to support people who can no longer be independent, whereas in the city that kind of infrastructure already exists or can be adapted for such use in a relatively economically efficient manner.  It's a form of what Jane Jacobs called "mixed primary use."

That being said the creation of "aging in place support and assistance organizations" is on the rise in center cities, especially in Washington, DC. See "A Village For the Elders" (2007) and "It takes a village to keep some seniors at home" and "AARP studies D.C. seniors who join aging-in place networks" (2010) from the Washington Post.

The Village to Village Network is a national technical assistance organization for such organizations.

Some issues with dealing with aging residents

1.  Village organizations are sprouting up all over the city (albeit in upper income neighborhoods) to support what in the trade are called "naturally occurring retirement communities."  I am pretty sure I remember reading this 2002 article on the topic, "Haven for Workers in Bronx Evolves for Their Retirement," in the New York Times.

I do think such groups should consider organizing on a geographic scale broader than a particular neighborhood, and there should be shared services amongst the various groups to aid efficiency.

2.  And I have complained that the aging centers infrastructure in DC ought to be co-located with other public facilities, and maybe shared across wards rather than every ward having its own senior center, in order to better utilize scarce resources. See "Provision of public services and recreational centers."  But since a lot of the funding is federal, this might not be possible.

3.  Kotkin points out that an AARP study (Aging in Place: A State Survey of Livability Policies and Practices) states that 3 of 4 seniors want to age in place.  That's very difficult for communities, because it makes it harder to keep neighborhoods, especially commercial districts, thriving, as they require a certain level of activity and patronage.

4.  So called "senior" or "retirement" communities find that residents don't want to move there til they are in their mid-70s, even though the communities are advertised as 55+ years of age communities.  (AARP membership eligibility kicks in at 50 years of age.)

5.  Transportation for seniors is a big issue.  In the first place, over the past 60 years, the US has developed a mobility paradigm that requires an automobile for accessibility.

-- International Conference on Aging, Mobility, and Quality of Life (2012)

As people age and they lose their ability to drive, they become disconnected from their world outside of their home.  That is why the "village" network is a good thing, as it provides low-cost assistance.

I don't have good advice for how to deal with people in your family who are aging and should stop driving or limit their driving.  We have to face that issue ourselves and it hasn't gone so well so far.

Relatedly, the rising demand for paratransit and senior transit services is crushing the budgets of transit authorities, which are required to provide such services as part of the various laws governing federal funds and transit.

On the other hand, the subway and bus system can be so congested that it can be difficult for people who have physical mobility issues to make sense of the system and get around.  It can be bad on a subway platform during rush hour regardless of your age!  So it can be that much worse for people who need more time.

6.  And one of the ways to deal with mobility issues in the city is to ensure that we extend walkability, bikeability (including three-wheel bikes and electric bikes) and transit services, and even automobile usage by seniors--because one form of prioritizing mobility uses is focusing resources on who needs them most.

7. Perhaps the most significant issue as we age is vulnerability to crime.  As we age we are easier targets.  And there are plenty of people who may see this and take advantage of the opportunity that this can provide.

Old people moving into cities give you a chance to tax their assets/wealth.

I've cacluated that my parents could easily live in DC almost tax free (assuming they invest in a muni bond fund).

Not a good system.

charlie, only if you have a municipal income tax. DC being a city-state captures all of such "state" income taxes.

Again -- youre thinking income taxes but I am talking wealth taxes.

And every city has that ability through real estate. Limits on that, obviously.

Taxing investment income/cap gains is something you usually leave to feds or states, so yes not a nationwide model.

ah, I see your point. Which, as usual, is a very good one.

How though do wealth taxes get triggered on real estate for cities? unless you are referring to the "natural" process of real estate turnover as a part of the death process?

I know in my neighborhood people live for decades. Lots of people on my street lived way into their 90s. (The lady who owned our house died at 94 I think.) So it can be a long time for this to come through, financially, but it's still a very good point.

No, just the annual assessment. The transaction taxes on sales are different.

(and again, increase the annual real esate taxes and reduce the transactions taxes)

I would still keep it the way it is. Rising property taxes push displacement, although with the state-local property tax exemption on federal taxes, it comes back some.

transactions taxes are a source of revenue for affordable housing in many jurisdictions and for transit in others.

This post is a great resource for so many blog things. Thanks for the info.click it...: https://www.dosepharmacy.com