Probably the element of streetcar discussions today that I find most frustrating is that they tend to occur in a vacuum that ignores:

(1) the reality that new and old streetcar systems of various sorts function in cities in North America and elsewhere in Europe, Asia, and Australia

(2) that streetcars operated in Washington DC for about 100 years, and

(3) that DC or any other American city is not particularly exceptional so that it is fair to assume that historical or present-day experience with streetcar service elsewhere can provide extendable lessons relevant to DC.

This comes up "again" because of a Washington Post article, "With D.C. streetcar's future unclear, this church raises concerns of K Street NW line," including remonstrations from members of Asbury United Methodist Church at 11th and K Streets NW, that having streetcar service on K Street, which would impact street parking or a taking of a portion of "their yard" (which legally is public space--on other blocks of K Street the equivalent space functions as a service drive with parking)--even though streetcar service operated on 11th Street NW next to the church for many decades.


Now Nero, who turned 82 on Thanksgiving, is worried that the stone sanctuary in downtown Washington that has been so central to so much of his life will be undercut — spiritually and structurally — by the city’s plan to stretch a streetcar line down K Street NW.

“You are just knocking out the . . . togetherness of the congregation,” Nero said, standing under the church’s soaring, century-old Gothic bell tower just a block from the massive new CityCenterDC development that typifies the type of growth that D.C. officials say demands investment in a far-reaching streetcar system.

From "Asbury UM Church to Fight Streetcar Line;" in the Washington Afro-American:


Tawanna Jackson, a church member, viewed the displays and said she supports progress but is wary of the city’s plans. “Streetcars are so large,” she said, voicing concern about church damage and parking. “Church members will have to park somewhere else and that will affect other cars and public transit.” 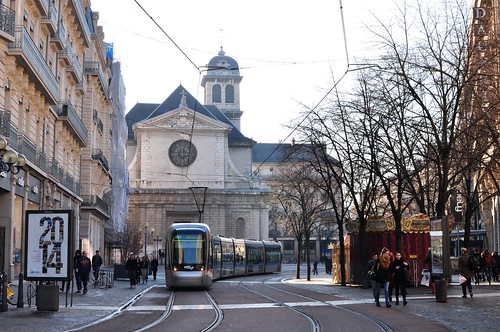 As a correspondent wrote:


I wish the members of the church opposing transit improvements in our city were as concerned about air pollution (including from their own cars), climate change, childhood asthma, dependence on foreign oil, noise pollution from cars and buses, etc. as they are about what appear to be overblown, indeed probably imaginary, impacts on their church.

Wikipedia photo:  Inekon-built streetcar in Portland, Oregon, USA, on the Portland Streetcar system.  Train is stopped at SW 11th and Clay with The Old Church on the right.

Note that separately, I don't have a problem with accommodating church parking on Sundays, provided that churches do transportation demand management planning, which DC churches tend not to do.

This is important as the residences of parishioners tend to become spatially disconnected from the churches they attend.  See "SF leaders search for ways to blend car-reliant worshippers with transit-first policies," from the SF Examiner. 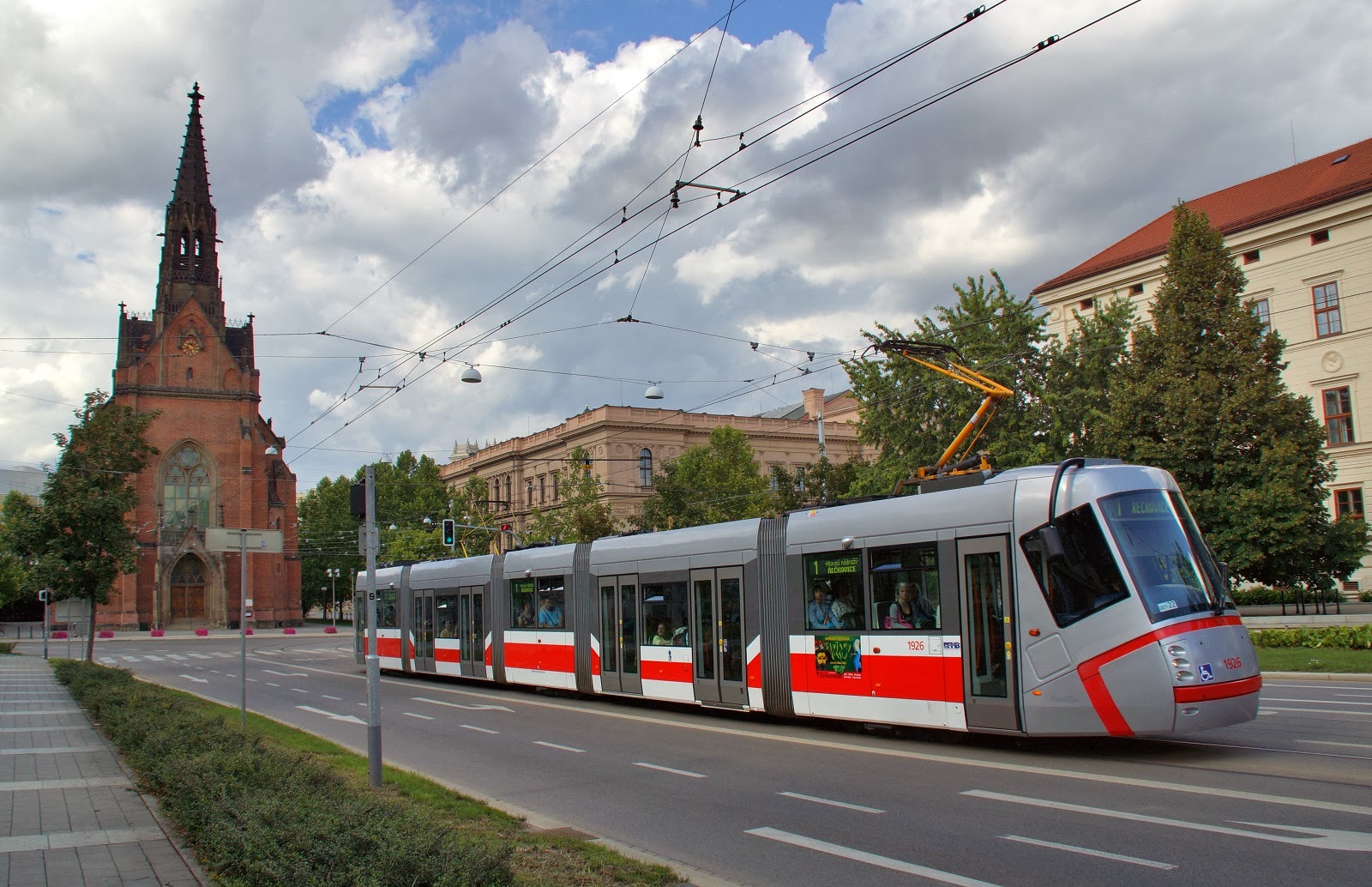 As the correspondent pointed out, it is not unusual for urban churches to be dominated by suburban members and this creates problems when attempting to mediate pro-urban policies for the built environment and transportation policy. 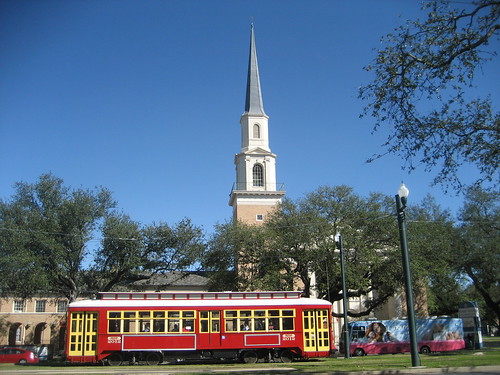 Something I realized in the early 2000s was that it was not in the "best interest" of a church to improve a neighborhood if their primary interest was in acquiring property around the church, because an improving neighborhood experiences raising property prices, which made property acquisition more difficult and more expensive. 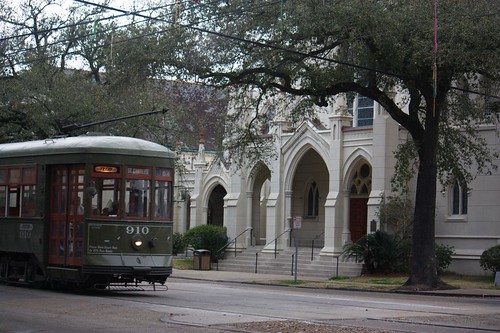 New Orleans streetcar + church. Flickr photo by thedillybar.  Note that modern streetcars are much quieter than the historic streetcars in New Orleans.

You and I have argued in the past on the gentrification in shaw book by the GWU author. His thesis is private ownership prevented gentrification. I think his approach is bunk -- "ownership" is a technical term. Great-grandma owning a property back in 1947 doesn't help.

That said, you could probably correlate urban blight with churches very well, at least in DC.

these people make me sick and disgusted- as do the old people on Capitol Hill constantly inveighing against streetcars [ they seemed to have stopped the 8th street streetcar already- so they appear to have won] there was a suit launched last year over in NE against the Springarn trolley house because it claimed that electric power lines fromt he new streetcars would hurt black people with radiation- the suit was thrown out. It is astonishing in this day and age at how ignorant and self possessed some of these streetcar opponents can be. What gets me are the people that have been to Europe and have actually seen them work - yet they come out against them here. It is if as though they never use transit when in Europe and take cabs everywhere or rent cars and drive. Again- these people are sickening- and the Washington Post is complicit in their stupidity by publicizing and giving a voice to these losers.

well, I argue that "gentrification" is a time based phenomenon, and the reason that it had been "delayed" in Shaw is because the green line was constructed and opened last, and in the meantime people focused on areas where the other Metrorail lines were operating.

Now that the green line is operating, Shaw is experiencing gentrification, as you know. Crazily too, some of the restaurants on Florida Ave. NW around 6th St. NW, pretty amazing.

Oh, my old H St. neighborhood had the same property ownership characteristics as Shaw. It was "resistant" to gentrification until the NY Ave. metro station was built and opened. The streetcar only accelerates existing change.

Transit, at least in DC, more than anything but along with the type of housing stock + centrality of course, shapes neighborhood desirability

bus traffic causes far more vibration and noise than a streetcar ever does. These ignorant people should just move their congregation to PG where they all live and sell their historic church to another group that is more likely to actually live nearby and does not need cars to get there. I have little use for these commuter churches that are abusive of neighborhoods and yet seem to have huge clout with the city and planning people who all kow tow to them as though they are the only real "historic population" DC ever had. Baloney.

Yes, that is the simplist (and best?) explanation. In DC in particular, gentrication really is " people with a stable enough job that they can get a mortage/rent" vs everyone else. So access to high quality transit is key.

Although that particular land rush may almost be over.

We do seem to over prioritze commuting here.

Well, given the falloff in federal spending, the number of two earner households both with high enough incomes to support houses costing more than $1 million is likely to decline.

That being said, what matters is the ability to capture those buyers, attractiveness of housing and neighborhoods, etc.

So at the metropolitan scale, maybe DC will be able to hold its own, even as the total number of such households levels off.

... (as you know) note that the dynamics of what generates higher income households in DC is different from NYC and SF/Silicon Valley.

So I don't think that the "hypergentrification" phenomenon described by Loretta Lees wrt Brooklyn Heights will happen here. 1. we don't have the same level of demand or 2. stock of amazing big buildings/apartments. 3. and people aren't getting mind boggling annual bonuses big enough to use to buy a co-op apartment...

Also I don't know whether DC has the same appeal to foreign buyers or whether there is even anything like the pied a terre market. While in theory someone in say Leesburg could have a place in the city, I can't see them doing it.

I have friends that live in apartments there parents bought years ago when they first moved to the city and before they moved out to the suburbs. I don't see that in DC either.

Plus NYC downzoned in 1961, which is only just getting talked about. The density levels of the city have been steadily falling and the influx of money and non present owners is only increasing that. That puts more pressure on the existing housing stock. SF too has steadily downzoned since the 1960s and lost a lot of housing to urban renewal both in the Western Addition but also South of Market. Even progressive heros in SF like Moscone were behind that kind of downzoning. The whole left in the Bay Area has long been against development and the privilege of that has resulted in the kind of market you see you today.

Good points. There are some pied a terre buyers in DC but it's small, and yes, there is limited interest in intra-metropolitan pied a terres. DC is not NYC, which has an appeal all its own.

On the metropolitan scale you get some of the effect of what is happening in NYC or SF, but with a major brake on price escalation. More households will choose to live in DC, so that will raise prices, not insignificantly, because for the most part, the stock of single family housing is fixed

It is being added to in very specific situations, but the overall impact is low, because generally, although not always, the placement is in semi-marginal locations (e.g., the development on New Hampshire Ave. NE of the old Methodist Home, this location is literally on the Maryland border, and an inconvenient walk, but doable, to the Fort Totten Metro).

E.g., McMillan (146 units) and Walter Reed (under 100) are perfect examples of minimal numbers of SFHs being added.

and yes, with continued downzoning and increased demand, how can people not expect price escalation to occur?

I didn't do so great in economics in college, but the principle of supply and demand is easy to understand.

Buy buy Ivermectin 6mg TabletsBuy Iverheal 6 mg Online, which is an anthelmintic, prescribed for certain parasitic roundworm infections such as Strongyloidiasis and Onchocerciasis. Ivermectin 6 mg kills the worms in the intestines. It might also be used for some other types of worm infections.