Why Metrorail ridership is down 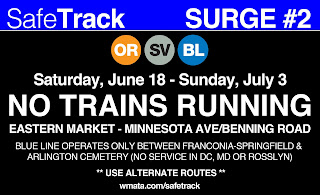 In response to the Washington Post story, "Metro's multimillion-dollar mystery: Where have our riders gone?," of course the answer is obvious -- significant degradation of the service and high cost.

Which the Post reported on a couple weeks ago ("Meet some Metro riders — ex-Metro riders, that is").

There is a great deal of research on the factors that influence people's choice of mode, but I don't need to reference that work to provide "insight" into the problem.

Note that SEPTA's ridership declined by 10% to 21% ("Ridership takes a hit because of SEPTA's rail woes," Philadelphia Inquirer) when they had to take many commuter rail trains out of service because of structural cracks discovered in the equipment ("SEPTA pulls repaired Silverliner V cars after new defect found," Inquirer), giving credence to the belief that service degradation is the primary reason for the decline in Metrorail ridership.

As commenter charlie said years ago, "transit's killer app is saving you time."  In most communities, people have choices and the well off have the most choice.  The people who can't afford personal mobility are typically called "transit dependent" for obvious reasons.

Ridership declines are likely derived from changes in behavior on the part of "choice riders," people who have the financial wherewithal to take advantage of other choices.  The intermediate term decline of gas prices is a contributor ("Metro Continues Steep Ridership Decline Amid Nationwide Trend of Transit Losses," WAMU/NPR).

Time/Efficiency.  The time to get from your origin to your final destination.  Efficiency is abetted by relatively short distances between residential location and activity centers, and concentration, which supports frequent transit service.  Frequency of service is an element of this measure.

With the decline in the quality of the Metrorail system, people's trip times have risen considerably.  In that case, people are led to consider and choose other alternatives. 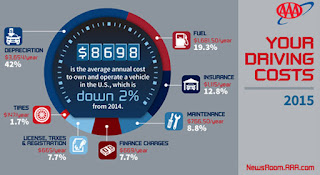 Cost.  The cost of alternatives.  For example, the American Automobile Association says the cost to own a car is about $8,000/year ("Annual Cost to Own and Operate a Vehicle Falls to $8,698, Finds AAA").  Note that people who pay to park pay more than this.

Obviously, the cost of gasoline is a factor.  As prices rise, people shift to transit, as prices decline, people shift to driving.  If people have free parking, they tend to drive more and if they have to pay they drive less.

The cost of fares.  The Metrorail system is somewhat unique for a "subway system" (it functions as a hybrid of subway and commuter rail) in that it charges on the basis of distance, with a one way fare topping out at about $6.

But it is also somewhat unique in that it charges by mode, so that rather than one fare or one fare slightly higher for a trip involving multiple modes such as rail and bus, they charge separate fares (see the 2015 entry, "What will it take to get WMATA out of crisis?").

Until recently the system didn't have very favorable rates for monthly passes, although this has changed with the introduction of the Select Pass.

But compare the cost of a car as calculated by AAA as around $8,700/year versus the cost of a year's worth of monthly passes for the NYC Transit system, which includes buses and subway -- at $116.50 per month, it costs about $1,400/year.

Even with additionally spending on car sharing and rentals, taxis, etc., the cost per year is considerably less than owning a car.  Similarly, SF's MUNI system has low cost monthly passes, as does the MBTA system in Boston.

In cities with a robust sustainable mobility infrastructure, it can be much cheaper to get around compared to automobility.  DC has those conditions, at least within the core of DC, as long as the transit system is highly functioning.

Marginal cost for additional riders on a single trip.  A big problem with transit is that it isn't cheaper for groups, unlike how with a car the marginal cost for additional riders is zero.  The cost for four people to travel downtown from outer points can be as much as $12 round trip per person (a little less for a one day pass).  At that rate, it is cheaper to drive.  Overseas, a number of transit systems provide inducements for people to use transit in such instances, by allowing some forms of group travel as part of a transit pass.

Comfort and safety.  Seats.  The ability to multi-task (read, etc.).  Quality of the ride.  (This has degraded significantly on Metrorail.)  Note that transit is still much safer than driving, generally.

Reliability/Predictability.  Expectations that the trip will be uneventful and not longer because of service interruptions.  With the decline in the quality of the Metrorail system, people's trip times have risen considerably.

Because of failures to adequately maintain the system, accentuated by service increases associated with the addition of the Silver Line, the system more frequently experiences unplanned service interruptions and outages that lead to significant delays.

For example yesterday had simultaneous service interruptions on multiple lines.  As pointed out in "Night and weekend transit/subway service: Metrorail edition," Metrorail's system design, which leads to inter-connecting or "inter-lining" various lines ends up spreading failure across lines like a virus, making the problem worse, rather than containing or localizing the problem.

According to a recent study, especially for choice riders, predictability is the most significant factor influencing transit ridership. From the Governing Magazine article "Top Reasons People Stop Using Public Transit":


Nothing ruins a public transportation rider's day quite like waiting around for a train or bus that never shows up. Turns out that if it happens enough, riders will start giving up on transit, according to a new report.

University of California, Berkeley researchers examined exactly what effect a transit system's unreliability has on its customers. While it's well-known that reliability is important to riders, it's less understood how, exactly, common transit problems impact the public's likelihood to reduce their ridership in the long-term.

Some studies show that transit riders value consistent travel times even more than shorter travel times, making reliability an especially important issue for agencies to consider if they want to retain customers.

One statistic in the study stands out in particular and should give transit agencies pause: More than half of the riders said they had reduced their use of public transportation specifically because of its unreliability. Most of them didn't just make fewer trips overall; rather, they switched to other modes of transportation to fill the void.

That's significant because transit agencies and advocates alike place a heavy emphasis on courting so-called "choice riders" -- those who have other options besides public transportation, but for one reason or another choose it anyway. The lesson from the researchers is that quality of service is important, and if it declines, choice riders don't mind finding alternatives. Unlike commuters who travel by car and have few options when it comes to changing their routes, some transit riders do have flexibility. And that flexibility can work against transit agencies if their service becomes too unreliable.

Alternatives.  In areas that have the spatial conditions that support a sustainable mobility centric lifestyle, the increased availability of other options -- walking, biking, bike share, car share, ride-hailing -- captures more trips based on the nature of the trip and the other factors (time, cost, comfort, predictability).  For example, with the decline in frequency of weekend service, plus the relatively low cost of one way car share, it's cheaper and faster for two people to drive using Car2Go than it is to wait around for Metrorail.

In polycentric areas, where the options are more limited, but can include driving as well as railroad commuting, people may shift also based on the same set of considerations. 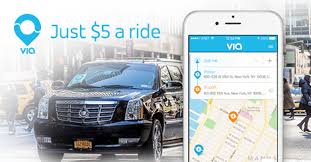 Although the likelihood of such services being successful long term is low, because today's current low fares are subsidized by capital investments that can't be maintained.

Although I do see potential for such services in functioning like shared taxis/jitneys in certain parts of a transit network service area, but this potential doesn't justify the high enterprise values accorded to companies like Uber ("Uber's $66 billion valuation may ride on shaky foundation," CNBC)

Failure to consider transit as a "product service system in its entirety."  WMATA for the most part focuses on Metrorail and Metrobus, not a more overarching goal and mission of facilitating the efficient movement of people and building quality communities.

For example, One advantage of people using Metrorail to get to big events, especially baseball, basketball, and hockey games, is that if they are able to so effectively, this can increase their willingness to use transit for other trips.  But WMATA is cutting back on such service, not maintaining it such as with their plans to do nothing extra to accommodate people attending Washington Nationals playoff games ("Without late Metro, Nats' first World Series could get embarrassing," and "Dr. Gridlock's tips for getting to Nationals Park playoff games," Post).

Dropping service to such events is over time, but one more contributor to ridership declines.