Why not a bicycle hub at National Airport?, focused on capturing worker trips but open to all 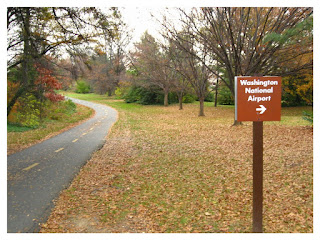 Image from Bike the Gap.

National Airport in Arlington County, Virginia is unusual for a large active airport in that it is in the core of the Washington metropolitan area, only 5 miles from Downtown DC and is bikeable from many points across the area--and is well  served by the Mount Vernon Trail, one of the area's foundational long-distance serving bikeways, connecting Alexandria, Arlington, and DC, with a connection to the Capital Crescent Trail and Suburban Maryland.

It has just been announced that bike share stations will be added to the Airport ("Capital bikeshare gears up for another expansion," Washington Post).

-- "Night moves: the need for more night time (and weekend) transit service, especially when the subway is closed," 2013
-- "More on airport-related transit/transit for visitors," 2013
-- "More on transportation to the DC area airports," 2013

(1) have bus service for when the Metrorail subway doesn't run, ideally integrated into a larger Nite Owl bus network ("Slight revisiting of the issue of overnight transit service: San Francisco," 2016

(2) set up a program to accommodate Car2Go one way car sharing, the way that Montreal's Trudeau Airport does ("Car2Go agreement with Montreal's Trudeau Airport could be a model for other jurisdictions") --the airport accommodates Uber and other similar services now ("The popularity of Uber, Lyft boosts airport revenue, but there are trade offs," Washington Post), why not car share?

I've probably mentioned that the bike accommodations at National Airport are paltry, one lone rack not up to best practice next to a distant administration building, even though the Airport abuts the Mount Vernon Trail. 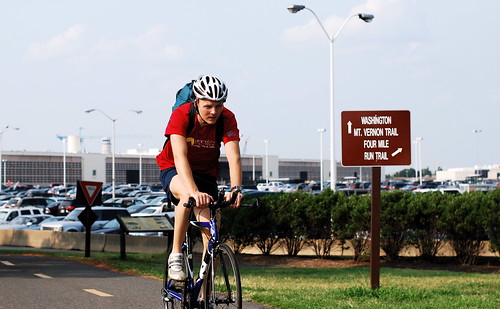 Photo by M.V. Jantzen of a cyclist on the Mount Vernon Trail abutting National Airport.

But in an e-discussion with Nigel, my correspondent from New Zealand, we've been talking about airport transportation connections.

I suggested it would be useful to have a set of case studies on best practices for sustainable mobility comparable to an old Volpe Transportation Center study on urban tourist transportation systems.

WRT bicycling, as part of the discussion of bicycle parking, it offhandedly mentions the Heathrow Cycle Hub, without discussing it.

According to Cycling Weekly ("Heathrow Cycle Hub a success"), the Heathrow Cycle Hub is a multi-faceted facility aimed at encouraging airport workers to cycle to and from work, while also providing services for airport users.  From the article:


... in 2011 Heathrow became the first airport in the UK to offer its 76,000 employees a cycle to work scheme and their own onsite bike shop. And in the two years it has been open, there’s been a 45 per cent increase in Heathrow employees cycling to work, with around 570 doing so every day. ...

Inside there’s a workshop and retail space open all day and manned by full-time, fully trained bike experts. Heathrow employees can sign up to the hub for free and get 10 per cent discount on products in the shop, free bike servicing, free maintenance classes and bikeability training. There’s even an emergency call-out available for anyone that has a breakdown in the airport. ...

Heathrow has been striving to improve sustainable travel for the last decade. In 2002, a car share commuter scheme for employees was launched. Heathrow also effectively exists in its own London travel zone, where bus transport in the airport and surrounds is free.

I remember an e-conversation years ago with someone from the University of California Institute for Transportation Studies who mentioned that dealing with airport worker travel to and from work was a major opportunity for shifting people to sustainable modes.

Heathrow Airport demonstrates how to do so, not just in having superior transit connections (subway, bus, railroad service), but also providing support for car sharing, car pooling, and cycling.

Since the launch of the Bike Hub, the airport has appointed a staff member to focus on employee bike transportation ("Healthrow appoints cycling officer to get local staff riding to work," Road.cc) and is advocating for better cycleway connections to the Airport.  The CW article discussed creating an airport area cycling map, but I don't know if that has been carried out.

National Airport, being so close to Downtown and other population centers, would be a natural for such a program in the US -- as would La Guardia Airport in Queens, O'Hare and Midway Airports in Chicago, Newark International Airport, Logan Airport in Boston, among others.

====
In future coverage of necessary steps to build the system for cycling at the metropolitan and regional scales ("Bike to Work Day as an opportunity to assess the state of bicycle planning"), I will add airport bike hubs as an item.

Cycle Hubs, like the one at Heathrow, those in the LA MTA system ("A parking garage for bicycles just opened at El Monte Bus Station," San Gabriel Valley Tribune) and other places need to be integrated into such a system, which is item #8 in the BWTD entry.

Melbourne, which is a world class best practice example of integrated sustainable mobility services, has a Parkiteer station at the public transit station serving Melbourne Airport, as indicated on the map below. Separately, the Airport provides bike parking too. 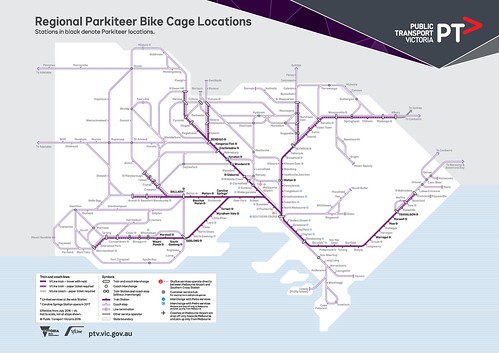 There's bike parking at DCA in at least 5 or 6 different places. Some is outside and some is in the garage. There is some by WMATA entrance too. Used to be signs from mvt also but haven't looked/noticed recently.

How "good" is the quality?

The only rack I saw with my own eyes is towards the end of the airport going north. I thought I had a photo but it's probably on an old computer.

It'd be nice if the airport website had info on biking access and a map of bike parking. It lacks such.

Before I posted I Googled and was taken directly to a MWAA map, a crystal city BID map, an old posting on The Wash Cycle, and a Bike Arlington forum thread.

From that map, the site I am familiar with is #1.

Interesting, for the search I checked the section "Parking and Transportation" which doesn't include bicycling or mention the MVT.

I also did a search on the website for "bicycle" and it didn't return any hits.

But I didn't use Google. And many sites are better to search independently through Google, than via its own search function.

Back closer to the original topic, the Crystal City / DCA connection feasibility study has another public information meeting on 11/16. BID website has info. It would not surprise if NPS put the kibosh on it however, because they suck, and they can.

Will check that out and probably write about it. For me, I don't know how important "a bridge" is as much as DCA adding a bus shuttle connection to the rail station. It's also a TDM move.

DCA has been very aggressive on expanding the Uber/Cab lot.

There was a piece somewhere on how airport parking revenue is dropping; perfect time to hit up car2go for 20 or so permanent spots in the daily parking.

Judging on how they've set up their webpage, I don't think they are thinking all that systematically about these issues.

It emphasizes what I wrote years ago suggesting that like the Puget Sound MPO, there needs to be MPO guidance about the area's airports.

Airports are absolutely thinking systematically about these issues, but they're doing so in terms of their business model, in which both parking revenue and taxi/TNC fees are a major revenue source.

By all means, I'll bet they'd like to offer a designated place for Car2go to park. But they're not going to do it for free.

Never expected them to. It's not like it's free at Trudeau (and technically, it's within an off-site parking spot, which is not how things work at National, but do at many other airports).

I forgot if MWAA charges a fee on taxi rides. They could also easily do so with uber.


Richard, off topic and more Larry:

MWAA charges fees for both taxis and ride hailing companies.

The Washington Post: I biked to Reagan Airport. Here's how it went..
https://www.washingtonpost.com/travel/tips/capital-bikeshare-airport-reagan-dc/