NBC4 asks if DC can become a concert capital like Nashville, Austin, and New Orleans? 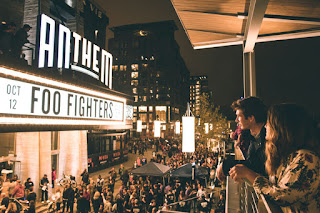 
It may be years before D.C. has the reputation of a music city like Austin, Texas, Chicago, Nashville, Tennessee, New Orleans, New York or Los Angeles. Yet the foundation has been laid with a rich history, from the jazz of Duke Ellington to the go-go of Chuck Brown, the R&B of Screamin' Joe Neal to the telecasters of Link Wray, and the punk scene of Dischord Records.

Today, the D.C. music landscape is as vibrant as it has ever been. From big stadium shows to a variety of intimate venues popping up all over town, this buffet of options paints a stark artistic contrast to tired Beltway stereotypes of stuffy lobbyists and pretentious politicians.

But it's a fact that Austin, Nashville, and New Orleans, among others are "music cities" because they are a home to performing artists, and there is a creative ecosystem that supports music development and production, as well as venues of all types and sizes to see music performed.

Not to mention Austin has its own problems in maintaining its positioning as "live music capital of the US" because (1) there are lots of places that offer music and the audience isn't necessarily growing; (2) the rise in the cost of commercial space means that venues are closing; (3) the reduction in the sales of music through CDs etc. reduces artist income; and (4) the increase in rents and cost to buy a house make it harder for cultural professionals not making a lot of money to afford to live in Austin.

-- "Under threat: Austin's music industry as an element of the city's cultural ecosystem and economy"

And Nashville has its problems, losing many of the original music studios to new development, although housing is still comparatively cheap.

And there have been many issues in New Orleans post-Katrina

DC has these same issues.  While it doesn't have tons of venues, it has some, and new ones are being added, which is what has triggered the NBC piece.  The audience isn't necessarily growing and the rising cost of commercial space makes it harder for venues to open and remain open.  Not to mention that the limited amount of Class B and Class C commercial space means that cheap rehearsal and studio space is hard to come by ("Ground up (guerrilla) art #2: community halls and music (among other things)").  And the cost of housing makes it hard for young musicians to come and live in the city and stay here while they develop their chops.

Some other recent articles that are related:

and this from a past blog entry, "The song remains the same: DC's continued failures in cultural planning as evidenced by failures with Bohemian Caverns, Howard Theatre, Union Arts, Takoma Theatre..." among others 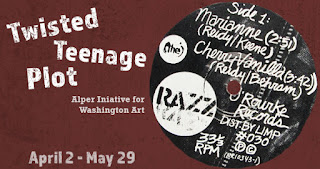 There is an interesting exhibit, "Twisted Teenage Plot," at American University's Katzen Arts Center on the artist-driven art rock movement in the city in the late 1970s and early 1980s, and how it was facilitated by the availability of cheap studio space in post-riot Washington and supported by various arts institutions (the Phillips, the Corcoran, galleries, arts organizations) that at the time were open and available to new ideas, programs, and ways of doing things, and a tight spatial footprint centered around 7th Street NW, Downtown.

Actually, the exhibit on the art produced by the artist-musicians isn't that exciting, but the collection catalog is excellent, featuring the artists, their stories, and their stories of the scene at the time.

This period is an element of the city's recent music history that has been overshadowed by the city's punk movement, which developed a little later in the mid-1980s.  Had bands like the Urban Verbs made it (albeit in my opinion the music isn't quite at the level of Television, Talking Heads, Velvet Underground, etc.), the story would be more prominently remembered.

The NBC4 link was quite thin, whereas the originally referenced WTOP piece was more comprehensive. And yes, the thesis of was about consumption, not production.

You're right, the WTOP piece is much deeper. Thank you for calling our attention to it:

but yes, completely focused on music presentation and consumption of concerts, not on music as an element of the local arts production ecosystem.

It reminds me of how the DC cultural plan draft (no word about it since comments were due 2/28/2018) highlighted the value of watching professional sports events as a key element of the cultural ecosystem. (I was pretty derisive.)

That said, the way the WTOP article highlighted IMP is important, because it is an outlier in the industry, able to compete even as the major national concert venue companies control most of the venues in various markets nationally.

And the Birchmere, which is an independent venue. But doesn't provide much insight into why that may be. I'd say it's because it tends to focus on a genre (folk) that isn't "big enough" to be of interest to the industry's major players.

=====
wrt consumption vs. production, it's an argument I learned reading some of the papers by John Montgomery, which are referenced in this past entry:

Although note that it lists five points for a local planning agenda concerning artistic disciplines, and I've since added a sixth, creating an arts-focused community development corporation as an implementation mechanism.

When I moved to Capitol Hill in 1983, there were 4 bars that offered live music every night. Now there's only one. Just sayin.'

@Mike Licht. But that's Capitol Hill, regarded as a mature sub-market. What live music venues exist elsewhere in the city now that didn't then?

DC attracts major acts because of its economic and demographic indicators, and has the venues to support them. These also draw economic activity in the form of restaurant visits, sales taxes, and other tourism activity.

Just to remake the point, there is a difference between a local music performance ecosystem and concert presentation.

That being said, yes, concerts draw economic activity. Probably a limited amount of tourism. Like sports events, they are an element of a metropolitan economy and where the venues are reshapes, somewhat, who benefits. E.g., the difference between US Air Arena and Capital One Arena means that DC benefits when concerts are held now.

But it's another reason why admissions taxes on tickets are important, as a way to defray the public financial costs spent on such venues.

Similarly, admissions taxes on "nonprofit events" (the nonprofits tend to lobby against such taxes) are a source of support for arts funding for nonprofits.

I didn't mention Toronto in the entry, but I think I have written about it in the past. A lot of venues have closed there.

... and to support local music, the public library system in Toronto sponsors concerts.

Hello, this article is very good. I also recommend you to read about Web Application Pentesting Approaches approaches.