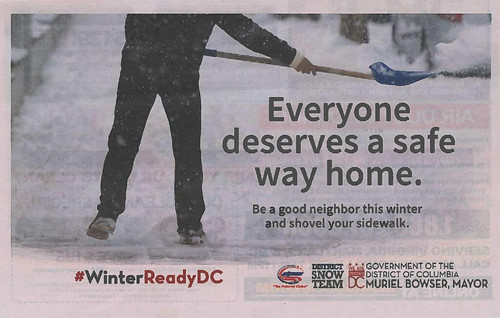 Since last year I never used a snow shovel, because the snow that fell once or twice melted within 24 hours, and this year, with some of our rose bushes blooming into January, it's hard to think about "winter."

But weather reports say that winter is coming this weekend, and the Northeast is already getting hit, and of course in the Midwest and West, they've been dealing with snow already for months--I think it snowed as early as late October in parts of Colorado?

But this ad from the Monday Express, by DC Department of Transportation on snow clearance, reminded me that in past years I've usually published an annual piece in November/December as winter looms, on winter preparedness.

-- "A "maintenance of way" agenda for the walking and transit city," 2010 was the first substantive piece, in the face of "snowmageddon" when DC got about 26 inches of snow over about a week through two separate storms
-- "Testimony on the Winter Sidewalk Safety Amendment Act of 2011," 2011
-- "Level of service and maintenance requirements in planning #2: winter maintenance of bike paths," 2012
-- "Agenda setting: snow clearance in the walking-biking-transit city," 2014
-- "Planning for winter weather," 2015
-- "Cataloging the various failures to remove snow in the walking/transit/bicycling city," 2015
-- "Who Knew?: There is a Winter Cycling Federation and annual conference," 2015
-- "Focusing on what's most important: snow on sidewalks or snow on cars?," 2016 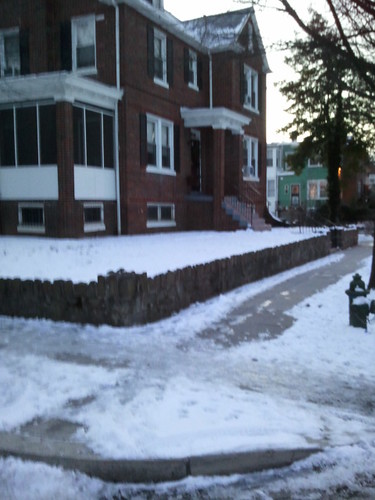 The biggest and repetitive point is about making snow clearance policies and practices focus equally on pedestrians, bicyclists and transit users, not just motor vehicles, especially in the context of how cities tout that they are walking, biking, and transit focused.

Considering that this station was one of the first to open, making it 42 years old, it's amazing that in those 42 years, the lack of adequate night-time lighting on the corridor around the station hasn't been addressed.

-- "Night-time safety: rethinking lighting in the context of a walking community," 2014