With confirmation of the El Niño weather effect occurring this winter, it is hard to say what the effects will be on the DC region.  There could be a lot of snow or not very much at all--I remember in 1998 that because of El Niño, Spring started in late January, with temperatures in the 70° range. Since weather has been that warm this weekend, I'm hopeful there won't be much snow this winter. 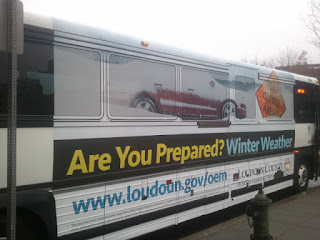 That being said, I was impressed by the bus wrap ads by the Loudoun County Office of Emergency Management, placed on the commuter buses that travel between Loudoun and DC, which reminded me I ought to do my regular posting on the coming of winter.

The basic point is that if a city claims to prioritize sustainable mobility, it ought to ensure that its planning for winter weather maintenance prioritizes mobility for pedestrians, bicyclists, and transit users, not just motor vehicle operators.


I've been doing the "maintenance of way" post for going on 7 years, and I have seen some improvements, in terms of certain (not all) public facilities doing a better job maintaining their sidewalks after snow events, the city's transportation department is spending more time and money on messaging about winter snow clearance--and unlike many jurisdictions, DDOT does do snow clearance on bike trails, and the City Council has passed some legislation too.

-- "A "maintenance of way" agenda for the walking and transit city (2010)
-- "Testimony on the Winter Sidewalk Safety Amendment Act of 2011" (2011)
-- "Agenda setting: snow clearance in the walking-biking-transit city" (2014)
-- "A reminder about winter-time conditions for pedestrians, cyclists, and transit users" (2014)
-- "Cataloging the various failures to remove snow in the walking/transit/bicycling city" (2015)

It means not using bike lanes as "snow storage" spaces.  And it means planning for snow removing on shared use paths that are used for bike commuting.

-- "Level of service and maintenance requirements in planning #2: winter maintenance of bike paths" (2012)

It should also mean renewed attention to lighting issues, because it should be safe to walk, bike and use transit at night too, and it gets dark as earlier as 5pm at some points during the winter months.

-- "Night-time safety: rethinking lighting in the context of a walking community" (2014)

A few years ago, a commenter pointed out that Rochester, NY has a system of city-provided snow clearance on sidewalks when the snowfall is greater than 3 inches. 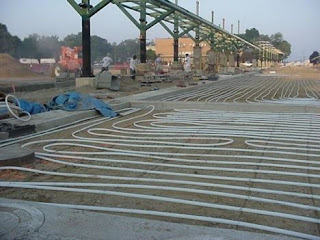 Heated sidewalks.  And earlier this year, I learned that the sidewalks in Downtown Holland, Michigan are heated, using the waste heat from a local power plant, which is then pumped through miles of pipes placed under the sidewalks.  It's not new though, they did it in 1988, when they were reconstructing the streetscape.

It's noteworthy for four reasons: (1) being in Western Michigan, Holland gets an inordinate amount of snow in what is called "the Lake effect" because of weather conditions in association with Lake Michigan; (2) it covers a lot of ground, over 10 acres; (3) it was constructed in association with a planned road and sidewalk replacement project, cutting the cost to do it; and (4) it is accomplished using waste heated water produced as a byproduct of electricity production.  (Waste water, which is generally at a constant temperature, could be a source for heating and cooling systems, something Arlington County has pointed out in its energy planning.)

But it was easier for the city to do this because they have a municipally-owned and operated electricity production and distribution system and water and sewer system, the Holland Board of Public Works. 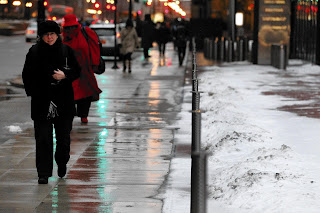 It reminds me that the steps of the Michigan Union at the University of Michigan are heated in the winter months for the same reason.

And the Chicago Tribune ("Heated sidewalks a welcome amenity in brutal winter") points out that some high-value properties, such as the former Sears Tower, have heated sidewalks, as do various public facilities in the suburbs.

Winter Cycling Federation of cities.  I also learned about an association of cities dealing with biking and extreme winter weather conditions, and they have an annual conference too.

-- "Who Knew?: There is a Winter Cycling Federation and annual conference"

There is enough steam heat around the White House and Capitol to do this. I don't know about other local heating.

If you could do it via electrics, I think it would have application for private condos -- cheaper than digging out sidewalks. Condo here has to spend about 10K a year on snow removal, and the sidewalk is a big part.

There was a section in the CT article about the increase in installation of such at high end properties. But they talked about NG.

... anyway, I started to include that but excised it as not "public-oriented" enough.

This is a resource:

... From a contractor perspective, it's a pain in the ass dealing with condo assns. and "retrofitting" improvements.

e.g., we do it with BicyclePASS and bike rooms. Some of the clients are forward thinking. But others, one or two people are interested and trying to move it forward, but the others aren't interested, or they want to do it at minimal/no cost, etc.

That's why I am big on getting the best practice infrastructure installed at delivery.

Still, when the city tears up sidewalks in mixed use commercial districts, this could be raised as an opportunity.