Events and programming in a systematic manner 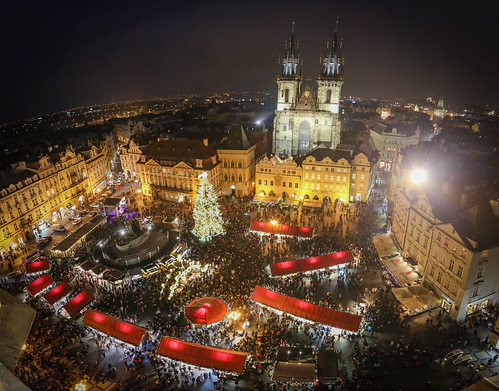 The article uses the example of holiday markets in Europe:


But San Diego and many other American cities fall short of what the season could be, judging by what goes on where Christmas -- the nonreligious part of it -- was invented, in central Europe. If San Diego were more ambitious, it could draw millions of visitors and their dollars, experts say.

Virtually every city, from village to metropolis, sets up Christmas markets in public squares, where entertainment, food and beverage, shopping and strolling take center stage. Berlin has 70 such markets. Some places attract 4 million or more holiday visitors -- in weather that hovers around the freezing point some nights. One estimate held that German markets generate collectively more than $5 billion in annual sales.

TourRadar.com lists 132 choices of travel packages built around these festive scenes, from $207 for three days in Vilnius, Lithuania, to $11,000 for 21 days from Prague to Paris.

A recent six-day trip to Prague illustrated the point. There were eight markets in full swing, from late November to Christmas Day. All were filled with booths stuffed with handicrafts for sale, sausage grills, and even hot chocolate, apple juice and mulled wine, no bouncer required to shoo away underage drinkers.

Events planning as an element of urban revitalization 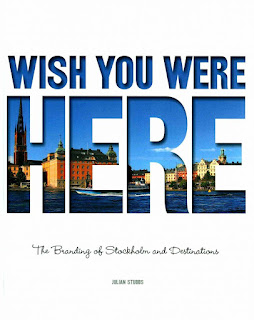 Wish You Were Here: The Branding of Stockholm and Destinations, authored by Julian Stubbs, makes a similar point.

One point he makes is that cities need to invest more money and time into the creation of events and festivals, but he also discusses mega events like the Olympics and the World Cup.

Unfortunately, for many countries--like South Africa for soccer, and Greece and Brazil for the Olympics--such events don't work out, but that's not relevant to this particular entry.

1. Cities with successful city center events have a city center that isn't dominated by the car.

The problem that people in the US don't often get is that these types of events do well foremost because they are embedded in the fabric of pedestrian-dominated city centers, so there is lots of activity anyway, people get to and from the district not just by cars, and people live there so that there is a fair amount of pedestrian activity regardless of visitation.

There are lots of holiday markets in cities across the US. They vary in success, but pale by comparison to holiday markets in Europe. Probably the ones that do best are in NYC, because NYC has the largest center city focused population in the US.

For New Year's, many communities have "First Night" activities which are family-focused and don't involve alcohol, as opposed to traditional New Year's Eve festivities involving drinking and dancing and such. First Night activities draw locals, not visitors, and cost more money than they make.  The national organization, First Night USA, no longer operates.

It's very important to be clear about what programs you take on, why, and the outcomes that are expected.

3.  Focus on developing a year round event and programming schedule.

In "Planning programming by daypart, month, season" and "Night time as a daypart and design product," I suggest that communities take a daypart approach to planning the retail and entertainment mix. 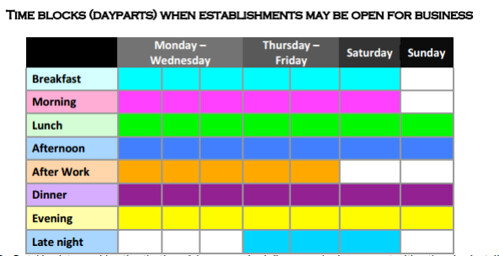 Dayparts as a planning concept for commercial districts.

Balmori and Associates have come up with a programming planning concept that takes into account multiple dimensions, including day of the week; time of day; season; month; theme; and local versus regional events. 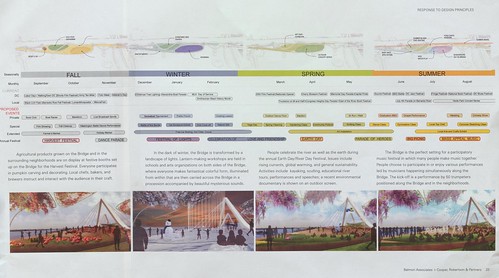 Some communities publish separate webpages and brochures listing the year's major events in one place. 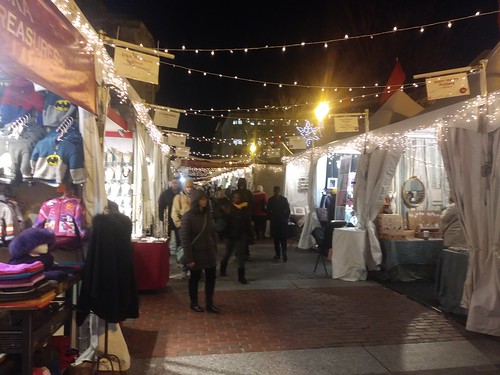 Yes the DC Holiday Market has music and sometimes a table is allocated to neighborhood organizations and museums, but it's not a major event, compared to a German market.

Relatedly, the UK has an initiative to improve "High Streets" by aiming to make them over somewhat to include a broader range of activities beyond retail ("Councils to bid for share of £675m fund to invigorate English high streets," Guardian).  Although I'd argue that traditional commercial districts have always been more than retail, but there is no question that the mix needs constant attention and planning.

Nevertheless, the same kind of forethought needs to go into center city event planning especially in the creation and management of anchor events.

I really liked your article and the photo is super. Thanks you.

Daytona Beach is finding that (Motorcycle) Bike Week and "SpeedWeeks" around NASCAR racing, are less successful at drawing in visitors. Hotel bookings are down, etc.

Despite disappointing reports about occupancy and room rates from area hoteliers, Davis isn’t ready to abandon Daytona Beach’s triumvirate of spring tourism events, but he thinks something needs to be done to put more heads in beds during the area’s special events.

“It’s an event town, and it will remain an event town,” Davis said, “but we, as an industry, have to see what’s happening. If you’re in a store selling sand dollars and they ain’t selling, you’re going to bring in another item.”

... As a way to jump-start bookings, Davis proposes embracing a five-week, family-oriented spring break to attract visitors more likely to stay for a full week, rather than visitors who book only special-event weekends tied to Bike Week or the Daytona 500 at Daytona International Speedway.

... [airbnb] competition isn’t the only factor involved in whether visitors choose to book a hotel room in Daytona Beach, said Mark Soskin, a retired economics professor at the University of Central Florida who used to be a Volusia County resident.

“You have to have something for them to drop their money on,” Soskin said, applauding the recent construction boom that has resulted in properties such as the Tanger Outlets mall at Interstate 95 and LPGA Boulevard, and One Daytona, the retail, dining and entertainment complex across from Daytona International Speedway. “You need to make sure that you have shopping out here. The name of the game is to capture as much business as you can here, but there has to be something to entertain them.”