=======
I have some pieces about how concerns in Montgomery County about lagging vis a vis Fairfax County comes down to the difference in the level of military spending in the two jurisdictions.

According to the Department of Defense webpage Defense Spending by State - Fiscal Year 2017, Fairfax has about 6x the level of military spending compared to Montgomery. (But Montgomery County does have significant federal spending on health and sciences through the National Institutes of Health, the Food and Drug Administration, other HHS units, and the National Institute for Science and Technology.)

The webpage has breakdowns for all the states and is a great illustration of how military spending is more about providing monies to activities in various Congressional districts, rather than a focus on war readiness. 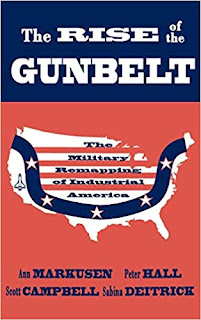 When I wrote the pieces about Montgomery versus Fairfax, I came across work by Ann Markusen that I didn't know about--these days Professor Markusen is more focused on the economic benefits of arts-related uses--The Rise of the Gunbelt: The Military Remapping of Industrial America.

The basic point of the book is that the Sunbelt's (and Boston's) success was driven mostly by military spending. This is the summary of the book:


Since World War II, America's economic landscape has undergone a profound transformation. The effects of this change can be seen in the decline of the traditional industrial heartland and the emergence of new high tech industrial complexes in California, Texas, Boston, and Florida. The Rise of the Gunbelt demonstrates that this economic restructuring is a direct result of the rise of the military industrial complex (MIC) and a wholly new industry based on defense spending and Pentagon contacts. Chronicling the dramatic growth of this vast complex, the authors analyze the roles played by the shift from land and sea warfare to aerial combat in World War II, the Cold War, the birth of aerospace and the consequent radical transformation of the airplane industry, and labor and major defense corporations such as Boeing, Lockheed, and McDonnell Douglas. Exploring the reasons for the shifts in defense spending--including the role of lobbyists and the Department of Defense in awarding contracts--and the effects on regional and national economic development, this comprehensive study reveals the complexities of the MIC.

This op-ed by US trade official Peter Navarro screams "Gunbelt" in its discussion of tank manufacturing and how many Congressional districts are affected.