In my "series" of entries about cultural planning, a couple discuss retail as an element.

-- "Cultural plans should have an element on culture-related retail," 2018

A bookstore related subsidy program was created in San Francisco ("San Francisco Independent Bookstores Get a Financial Boost," KQED). The Drama Book Shop was purchased by personages in the theater field including Lin-Manuel Miranda ("Drama Book Shop Sets a Fresh Start in a New Locale," New York Times). The City of Beijing has an active bookstore support program ("Beijing bookstores get millions in subsidies," CGTN).

I've mentioned the retail initiative by the SEMAEST community development corporation in Paris, which supports the maintenance of lower priced retail space, for independently owned retail  ("Emmanuelle Hoss, new managing director of the Semaest, a real estate company in the city of Paris," LSA).

And how the Salt Lake Film Society, which runs cinema programming in a new construction facility as well as the historic Tower Theatre in the 9th and 9th neighborhood, also runs a video rental shop out of the Tower ("Why Tower Theater Video Rentals Thrive While Blockbusters Rentals Fail," Utah Stories).

I am a huge fan of periodical stands.  These days, about the best available selection--no newspapers--is presented by Barnes & Noble, if they have a store in your town.

While newsstands were common in every major city, this is no longer the case today.

There are still vestiges of stores dedicated to periodicals, such as Vroman's in Pasadena, California, a stand in the Los Angeles Farmers Market, and stores in New York City, including on-street newsstands, although they are on the decline ("End of the classic newsstand," Forgotten New York).

And of course, the shops in airports and train stations, many run by Hudson Group.

Some of Montreal's French language bookstores have great periodical sections, which makes sense because they are dedicated to presenting the French language in an otherwise Anglophone country.

I still remember newsstands in Downtown Detroit when I was a child, and I am a huge consumer of newspapers, magazines, and journals today.  Over the past 10 years or so, two of DC's three major newsstands, where you could get newspapers from across the country and magazines from around the world, have also closed.

First and Pike News, the landmark newsstand at Pike Place Market, will close at the end of December. (Alan Berner / The Seattle Times)

What about newsstands (and specialty bookstores) as part of library programming? The video rental store by the Salt Lake Film Society shows the way.

In a program concept I developed as a proposal for the DC Library ("Civic assets and mixed use: Central Library edition"), I suggested that a ground level bookstore/newsstand could be incorporated with periodicals presented in the "facade," just as how increasingly restaurants are installing garage doors so that they can open out to the street.

This idea of harvesting the opportunity to program libraries as more multifaceted cultural spaces is further developed in this piece, "Update: Neighborhood libraries as nodes in a neighborhood and city-wide network of cultural assets."

Definitely a newsstand concept should be included as part of this kind of planning approach.  Although such a function can probably only be successful at central libraries or large regionally serving branches, located in active commercial districts.

While not including a bookselling space, the Portland library branch in the Nob Hill commercial district actively merchandises its windows. 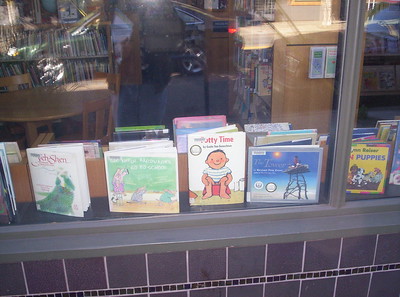 Many of the "Idea Store" libraries in the Tower Hamlets borough of London are located in busy commercial districts.  It looks like this branch on Crisp Street has inset retailers with facades open to the street on one side of the building. 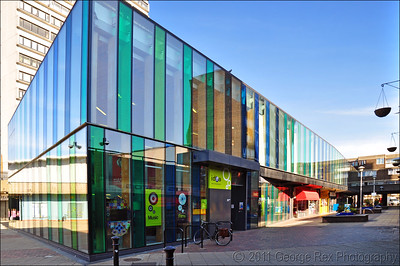 Separately, on the backside of the BANQ library--a provincial library which also functions as Montreal's central library--they have a "booksellers alley" with small stalls rented out inexpensively to the sellers of books, periodicals, and ephemera ("The Allée des Bouquinistes Returns, May 17 Through October 19").

Allée des Bouquinistes, Montreal on the backside of the Montreal Central Library.

Some more actively sell used and sometimes new books in spaces within the library as a fundraising program, such as at the San Diego Central Library, where the Friends of the Central Library run a quality used bookstore open every day, which helps to activate the library space in a more retail fashion.

Open six days/week, the used bookstore fundraising operation at the Orange County Public Library branch in San Juan Capistrano is marketed by city tourism and commercial district promotions as the city's only bookstore.

The since closed Willesden Green Library in London--shut down as a result of austerity cuts to local government budgets--rented space to an independent bookstore ("The Willesden Bookshop that inspired Zadie Smith faces closure," Guardian).

Arts book sales too need a push from planning.  A great arts and design bookstore is something else that should be addressed in the context of creating community cultural plans.

Some communities have arts book fairs at least once/year, and some museums maintain great "book shops" dedicated to art and design titles, as part of their museum store operations.

The Heinz History Center in Pittsburgh not only has one of the city's visitor centers, but a great locally-focused gift shop and bookstore.

Some local chapters of the American Institute of Architects have bookstores dedicated to architecture and design titles.  Sadly, after a 42 year run, the Philadelphia AIA bookstore closed last year ("So long, AIA Bookstore," PhillyVoice).

The Pyramid Arts Center in Hyattsville, Maryland has a small library for use by its members. A museum in Rochester, Minnesota, I seem to recall, has a similar collection for use by artists.  The V&A in London has an arts library.  There is a performing arts music library as well as a VHS collection of plays at the Lincoln Center.  There are multiple music libraries across London.

The Taschen arts publishing firm has multiple stores in the US and Europe.

And the Modern West Art Gallery at the Bogue Foundry Arts complex in Salt Lake City has a section of its space dedicated to selling titles from the Taschen arts books publishing house.

L.A.’s independent bookstores reckon with diversity (or the lack of it)