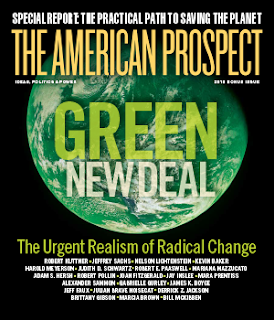 The American Prospect has published an entire special issue on the specifics of a Green New Deal. The purpose is to demonstrate that urgently needed public investment in a sustainable economy is practical — fiscally, technically and politically.

Some skeptics have dismissed the entire concept of a Green New Deal as hopelessly utopian. This package of 22 articles by leading authors on climate change shows that we can achieve a post-carbon economy for about two percent of GDP or less, and that the benefits will far outweigh the costs.

The issue will be introduced at a press conference and discussion with Sen. Ed Markey and several of the authors, in room SVC 215 at the Capitol, at 1 p.m. Thursday Dec. 5, 2019. The public is invited to attend.

======
I think this is the right direction, even if I have some issues and questions with various approaches.  I definitely need to read more about it.

There is a parallel effort in the UK.

In some respects I think I don't think big enough.

OTOH, there are lots of measures that can be taken now that would have tremendous, from national recycling requirements ("The EPA’s new recycling plan is straight out of 1985," Los Angeles Times), product development and packaging standards, to a huge focus on transit expansion in major cities and reorienting land use regulation around reducing sprawl--Alon Levy has an important piece on development capacity in New York City in areas already served by transit