That American Express, a big corporation which mostly makes its money from big corporations, is the sponsor of Small Business Saturday, which focuses on independent businesses, is ironic and illustrates the contradictions in the American economy.

We laud independent businesses.  But we promote and support bigness.

Independent businesses often focus on providing artisanal goods, but such goods are more expensive, usually being produced with a lot more labor, and at the same time, our consumer economy is focused on buying a lot, but at the lowest cost.

In business there is the line: "Price, Quality, Speed: pick any two."  With a focus on price, independent business in terms of production and sales is usually the loser.

Furthering the contradictions, as part of its focus on Small Business Saturday, American Express has produced a set of videos focusing on small businesses, called "Saving Main."  The first one is on a clothing-focused store in Oakland, California, called OwlNWood.


Interestingly, while most of the economic changes--especially housing production and the attraction of higher income residents (because they can't afford to live in San Francisco) in Oakland are likely to benefit her ability to sell more product, it could affect her ability to stay in the same location if rents rise/she doesn't own the property.

And in the video she mentions specifically how her local supplier for custom sewing, a small manufacturer, is likely to be displaced as higher value property uses replace industrial uses.

But to me, not covered in the video, the issue is likely more than the changes in Oakland, although yes, they are an issue, but more about the commercial district and its foot traffic, and possibly the way that the store is managed.

Shifting to Salt Lake mostly, before moving we joked about opening an apparel, gift, and coffee shop, based on the way a couple stores in DC work. 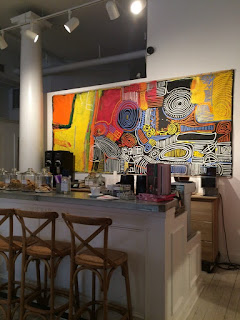 Coffee bar at the back of the Modern General Store by Sylvester & Company in Savannah.   (This branch has closed but I think it would have worked in a more walking, less touristy district, in a community with a bigger population.  The company still has a store on Long Island, albeit in the tourist destination of Sag Harbor.)

But besides SLC being 1/3 the size of DC, the reality is that this is an automobile-centric community, not transit-walking based like many neighborhoods in DC, which was the model for the business concept.

(Other models are a couple stores in Hampden in Baltimore and in Savannah, where a bunch of stores--books, apparel and gifts, housewares--also incorporate coffee shops, which is a great element because as I say "people eat and drink every day, but they don't buy a shirt or book every day..."  More recently, the Shop Made in DC store which was on Dupont Circle had a cafe.)

So I am skeptical that the concept could work (or at least, I feel more confident about doing such a store in a walking district), unless we get the absolutely right space, and place, and rent, and publicity able to attract customers who have to consciously make the decision to visit, as opposed to stopping in while walking home from the transit station.

That being said, there are a fair amount of independent businesses here.

And they do succeed in the context of an automobile-centric community.

It's important to distinguish the characteristics a business needs in order to be successful.

A couple that I've come across in my work are Pavement in the Lawrenceville District in Pittsburgh and Willow on Upshur Street in DC. 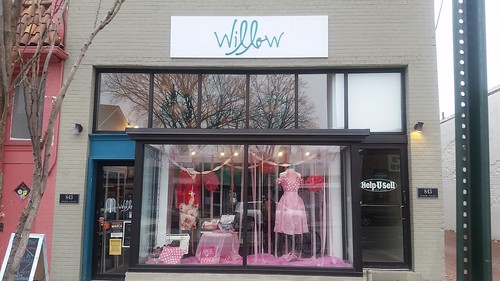 I wrote down my 12 lessons from Willow, but those notes are boxed away somewhere.

For Willow, it's key that the store has an ever changing inventory of clothes that are competitively priced (constantly changing means that if you don't buy it when you first see it it might not be there when you return), is neighborhood-anchored, but also on the walking route to and from transit--both bus and subway, and that the owner lives in the neighborhood, and has developed what I call "a brigade", that is a group of fans, mostly neighborhood residents but not exclusively, who stop by to shop frequently.  The store also supports and develops events both for the store and the commercial district. 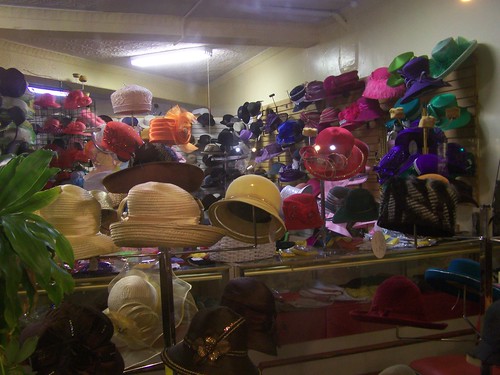 This is key.  My Manor Park DC neighborhood has a little one block shopping district on the 6200 block of 3rd St. NW and there are three clothing stores there--a hat shop, a boutique, and a consignment store.

All do great window displays.

But by contrast to Willow--which also does great window displays--few people walk in Manor Park, and the displays are wasted.

Pavement is in a more widely known commercial district, but it isn't a setting with a lot of foot traffic.  So there has to be constant promotion in order to attract customers.  Although 10 years later when I first came across it, Lawrenceville has more than come into its own.

Trying to figure out why Pavement was an exception to the rule about apparel retail I read Designing Brand Identity which led to this table:

• Understand the needs, preferences, habits, and aspirations of the target audience.
• Good design sells. It is a competitive advantage. Design is systems and processes, not just graphics.
• A disciplined, coherent approach leads to a unified and powerful brand presence.
• Create a distinct position and complete identity for your store/concept.
• Experience and study the competition and learn from their successes and failures.
• Understand traffic flow, the volume of business, and economic considerations of your location.
• The storefront is a mass communications medium that works 24/7 and can attract new customers, influence purchasing decisions, and increase sales.
• Logo and signage expresses the brand and builds on understanding the needs and habits of users in the environment.
• Exterior signage must consider both vehicular and pedestrian traffic.
• Design an interior space that is sustainable, durable, easy to maintain and clean, and is energy efficient.
• Consider the dimensions of space: visual, auditory, olfactory, tactile, and thermal.
• Understand the psychological effect of light and lighting sources.
• Consider the needs of handicapped customers and those of different ages.
• The shelf is the most competitive marketing environment that exists.
• Align merchandising strategies with displays, advertising, and sales strategies.
• Create an experience and environment that makes it easy for customers to buy, and that inspires them to come back again and again.
• Create an environment that helps the sales force sell and makes it easy to complete a transaction.
• Align the quality and speed of service with the experience of the environment.
• Benchmark the quality and speed of service against the competition.
• Consider all operational needs so that the store delivers on the brand promise.
• Anticipate future growth. Measure, evaluate, change. Constantly ask: is the message clear?; is the content accessible?; is the experience positive?

(Social media barely existed when I produced that table.  It's a necessary addition now.) 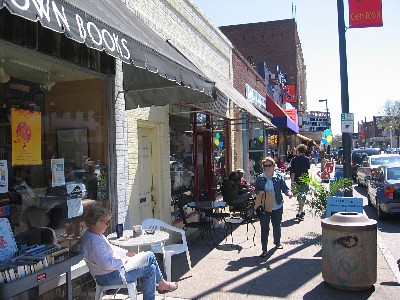 By contrast the Hampden district in Baltimore and Carytown in Richmond are regional destinations in that they are known for providing a wide range of independently run retail businesses.

So even though those communities are automobile-centric, those districts are destinations.

Small and trade presses should create their own day as part of the holiday sales cycle. Bookstores too?

WTOP has a story that District Hardware and Bike is closing. I used to go there all the time when it was on Dupont Circle, for bike repair. It then moved to Foggy Bottom in a new development, and then to the Wharf.

I think the failure is about location and fit of the business model.

First, a hardware store has a harder time in the core, especially in neighborhoods dominated by apartment buildings.

I think they work better in areas with a mix of houses -- which generate more hardware demand -- even with apartments.

E.g., the Real Cool Hardware Stores group opened a store on 5th St. NW in the CityVista development, but closed it a few years later.

OTOH, they have stores in Logan Circle (although it moved), a relatively new one in Adams Morgan, the original in Tenleytown, and in Takoma Park (I shopped there a fair amount).

1. The Wharf is likely to be a bad location for "retail" as opposed to restaurants, and the rents were probably high.

2. Talking to a bike shop proprietor who closed two of his three shops, he said that industry wide, sales of bikes are down, but revenues are steady, because people are buying more expensive bikes. But with reduced sales of bikes, come reduced demand for accessories and repair.

I don't think there is as much demand for bike purchases in DC as people might think, given that it is a bike city relatively speaking, compared to most.

Bike share probably captures a fair amount of demand in the core. And scooters substitute for bikes on the part of many.

So the bike element of their business probably wasn't that great either.

=====
although I do think from the standpoint of transportation demand management and sustainable mobility promotion that it's reasonable to provide rent subsidies to bike shops. But that could also include providing space in places like transit stations or government buildings that are well located.

SF is proposing a retail vacancy tax. This op-ed in the SF Chronicle disagrees with the approach.

I noticed that the various theater company ads in the Salt Lake papers mention giving tickets as holiday gifts.

That's another opportunity to add to the "event schedule" for the holiday sales season.

Can Washington become a fashion city? WAMU story on boutiques and designers in DC.