A c. 1940s post-war ad by a company then based in Detroit. In the 1950s, Detroit had something like 15 auto assembly plants, now it has two.

The University of Michigan announced the creation of a new Detroit Center for Innovation, in association with Dan Gilbert, principal of Quicken Loans and a big investor in the physical revitalization of Detroit albeit focused on the core and private equity honcho Stephen Ross (who has his own issues, "Who is Stephen Ross, the billionaire criticized for his high-end Trump fundraiser?," Washington Post) in an Opportunity Zone which have issues ("I figured out why Opportunity Zones won't amount to much") on a site that had originally been slated for a jail.

The College of Literature, Science and the Arts has a Detroit-based program, the Semester in Detroit, where students live in the city, take classes and do projects, and faculty of the program have criticized the DCI proposal ("UM Semester in Detroit faculty express concerns about new Detroit Center for Innovation," MLive).


UM would offer masters degrees and “stackable certificates” for professionals who would serve the emerging high-tech economic system, building capacities in areas such as artificial intelligence and cyber-security, emerging fields in what some have called the rise of “surveillance capitalism.” As reported by Detroit Free Press business columnist John Gallagher, the planning for this project occurred almost exclusively behind private, closed doors with no input from long-time Detroit residents, community institutions or city council. ...

The city of Detroit is important - both historically and contemporarily - for understanding the complex and inextricable conflicts created by capitalism’s dependency on racial and economic oppression and inequity. While such conflicts have been present since colonization of the original Anishinaabe lands that became “Detroit,” we need only look back a few years, or even weeks, to see how white billionaires continue to “re-imagine” majority-black Detroit in their own image and for their own economic benefit. Given this history, and considering the private interests involved in this partnership, we believe the “Detroit Center for Innovation” is an inappropriate and irresponsible deployment of the University’s social, economic and intellectual capital. ...

Many recent major development projects in Detroit have skirted, abused or manipulated the spirit and legal requirements of Detroit’s community-benefits ordinance. ...

The land for this project encompasses the boundary between the historic black neighborhoods of Black Bottom and Paradise Valley, which were strategically destroyed by the city of Detroit, in conjunction with the federal government, in the mid-20th century. How will these community histories and legacies be honored and empowered without tokenism and cultural cooptation? And, who will decide?

Yes, I think universities need to be careful about the relationships they make with funders and programs.

Given his recent controversies, I'd probably back away a bit from Stephen Ross.  OTOH, he is a UM graduate and gave enough money to the business school to have them rename it in his honor--first after a donation of $100 million, which he followed up with a second $100 million 9 years later..

But UM and Dan Gilbert, even Stephen Ross, aren't responsible for all the faults of capitalism and to possibly scuttle this investment/program as a result would do a lot more harm to Detroit.

I do think such criticisms can and should be used to make the program better, and more focused on generating more direct benefits for the city. 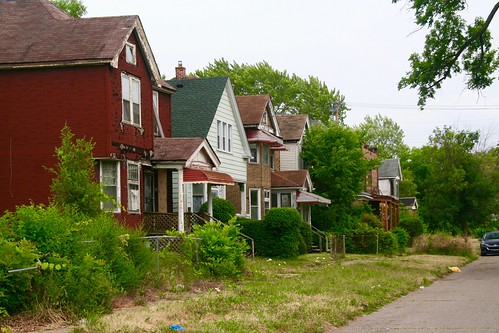 The city has is a loss of two-thirds of its population over the past 60 years and much of its industry.  It needs to reboot the business ecosystem in order to be able to generate growth in the face of abandonment.

When I first heard of the proposal, I thought about an article I had read about Walter Chrysler, and why he was able to create a car company without a lot of internal capacity.  It was because he was able to rely on a rich ecosystem of suppliers.

In the 80+ years since, the business ecosystem of auto production has changed significantly, bulked up, so that such an ecosystem no longer exists.

But that's true of many different industries.  And many other cities have been equally crushed by the changes from consolidation and relocation of manufacturing outside of the US.

Could a UM DCI help to rebuild such an ecosystem across multiple business sectors, thereby helping to rebuild not only Detroit, Michigan and US manufacturing (cf. "Innovation Should Be Made in the U.S.A.," Wall Street Journal) but the city's economy and attractiveness as a place to conduct business and reside?

(My problem is that I have to forget my memories of what Detroit was before 1970--many of us did not recognize that the city was in serious decline at the time--and take such proposals from where they are, where the city is today.)

Invest with 200$ and get a returns of 5,000$ within seven business working days.
Why wasting your precious time online

looking for a loan? When there is an opportunity for you to invest with

business working days. Contact us now for more information if

interested on how you can earn big with just little amount.

This is all about investing into Crude Oil and Gas

Curious how the local supplier ecosystem has fared in the Detroit area. I imagine some of the "deleveraging" that was feared in the economy at large probably has happened as the auto industry weathered the Great Recession.

I read a really interesting piece some time back about how the Japanese auto industry relies on even smaller distributed workshop-sized suppliers to make "just in time" manufacturing work.

Thank you from management goes a long way,click it...: https://www.dosepharmacy.com

Do you need an urgent blank ATM CARD to solve your financial needs and i just want to tell the world my experience with everyone. i discovered a hacking guy called Mike. he is really good at what he is doing, i inquired about the BLANK ATM CARD. if it works or even Exist, then i gave it a try and asked for the card and agreed to their terms and conditions. three days later i received my card and tried it with the closest ATM machine close to me, to my greatest surprise it worked like magic. i was able to withdraw up to $4000. This was unbelievable and the happiest day of my life. there is no ATM MACHINES this BLANK ATM CARD CANNOT penetrate into it because it have been programmed with various tools and software. i just felt this might help those of us in need of financial stability. The card have really change my life. if you want to contact them, HERE is the email: blankatm156@gmail.com