Shopping local during the holidays: Small Business Saturday and beyond

-- "Mass consumerism is destroying our planet. This Black Friday, let’s take a stand," Guardian
From the article:


Today, in austerity Britain (and, yes, for all the talk of spending promises, austerity is still here), the idea of excessive consumerism seems to have lost much of its resonance. Memories of consumerism and easy credit seem to have become tainted by the recession. Academics have observed how Britons felt ashamed of their pre-crash consumerism and (wrongly) felt personally accountable for the austerity that followed, identifying particular consumer objects – such as expensive tracksuits and conservatories – as symptomatic of a flaw in the national character.

For many consumers, shopping has become mixed with guilt and a sense of responsibility as it increasingly depends on credit card debt and the labour of poorly paid and precarious workers – and it has a heavy environmental toll. Buying something today is also an experience drained of fun: it often entails making sure you are in when the package arrives, unpacking it and realising that it isn’t what you wanted.

Not in the U.S. But it should. And more people are cutting back. If you are going to buy stuff, why not make choices on what and where you buy in order to have more economic impact locally?

-- "Before you jump on the sales train, ask yourself: do you need this?," Guardian 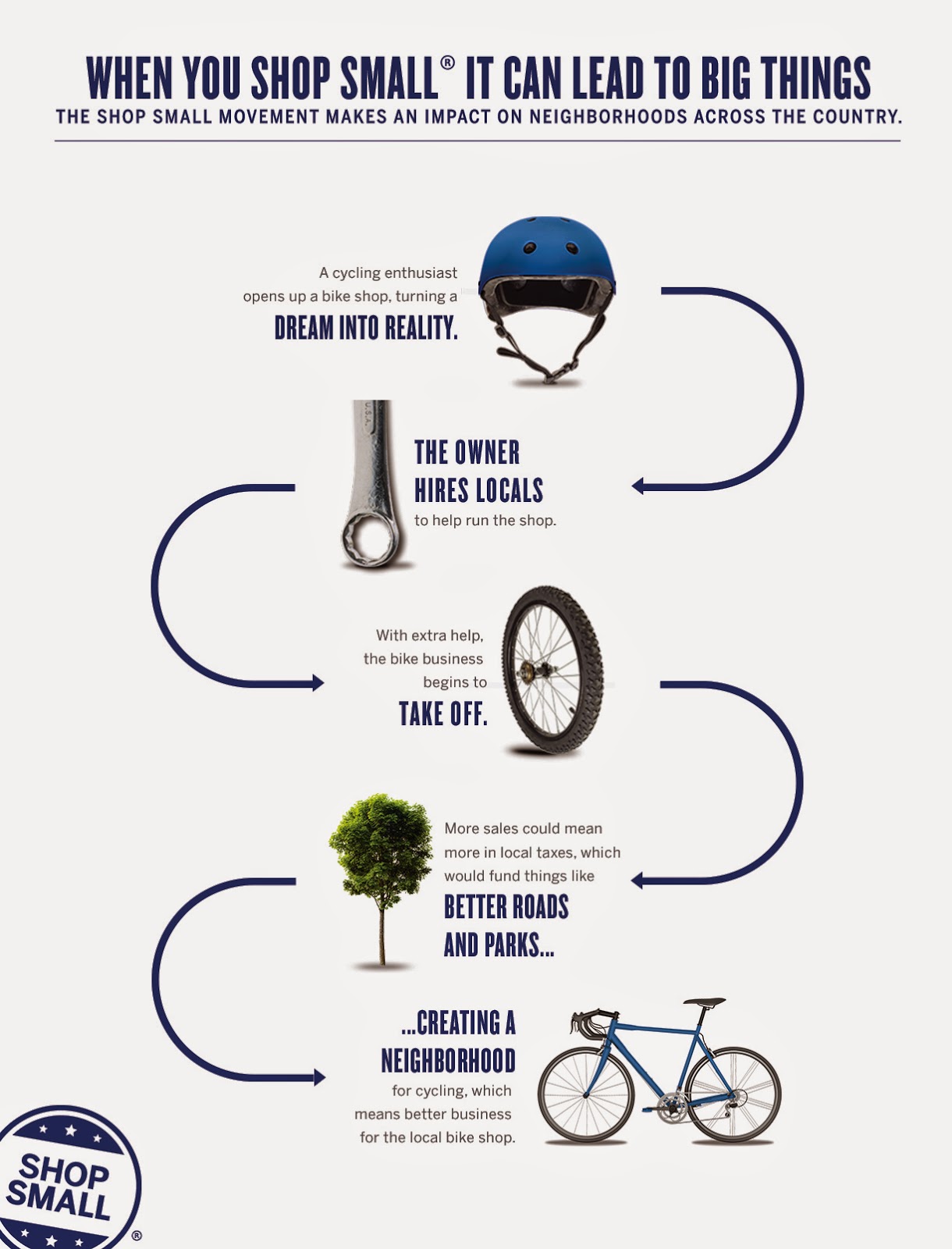 The holiday shopping season is touched off by so called "Black Friday," the day after Thanksgiving.

Although plenty of stores open on Thanksgiving, although some companies remain holdouts.  And many others are starting their holiday promotions earlier and earlier ("What Does ‘Black Friday’ Even Mean Anymore?," New York Times.; "‘Everything is always marked down’: Black Friday has become just another day of sales," Washington Post).

The big chains offer lots of deal busters to get shoppers in stores, and over the past few years stores have been opening earlier and earlier, including no longer waiting til Friday and opening on Thanksgiving.

Promotion of independent commercial districts and stores can be a hit or miss phenomenon.  Some retailers are good marketers, many are not.

An example of a national program designed to promote small business, but that is realized only if local businesses and commercial districts organize to leverage it is Small Business Saturday.

The event was created a few years ago by the American Independent Business Alliance, the group that actively promotes the "Shop Local" movement,.to promote holiday shopping at local and independently owned businesses, as opposed to how most holiday shopping is focused on big box stores and national chains,

Museum Store Sunday/Cyber Monday/Giving Tuesday.  Other "interest groups" have jumped on the bandwagon and have developed companion days riffing off Black Friday.

E-commerce retail aims to make the Monday after Thanksgiving their biggest shopping day of the season and year, calling it Cyber Monday, which now has greater sales volume than Black Friday.

A few years ago, the Museum Store Association created Museum Store Sunday.  Definitely there are exemplary museum stores such as the MoMA Design Store, the National Building Museum's gift shop, the book sections at museums like the National Gallery.  Since people don't think of museum gift shops outside of visiting a museum's galleries, it makes sense to do a promotional event ("Museum Store Sunday fills shopping gap no one knew they had" and ""Museum Store Sunday: Shop small businesses off the beaten holilday path," USA Today).

Small Business Saturday.  For the past few years, the event has been sponsored by American Express, which originally offered inducements to card members as an incentive to shop local on that day.

They continue to put a lot of money into marketing, advertising, and promotional support.

That affiliation with American Express was too corporate for Takoma Park's Old Takoma Business Association, which created its own parallel event but without signing on to the American Express effort. 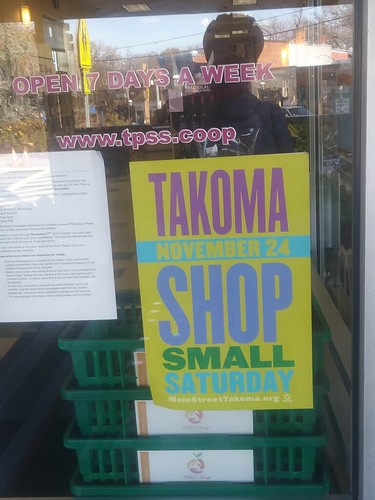 The economic value of shopping locally.  Research results are piling up demonstrating the thesis that spending money in stores based locally has greater economic benefit than shopping in chain stores, which buy few services locally (excepting labor) and don't spend profits locally.

Reminders to shop local are necessary.  A big campaign promoting shopping at independently owned stores and in traditional, usually town-city based shopping districts as opposed to shopping malls, reminds people that spending money at locally-owned stores is important.

The reality is, with so many other marketing messages, people need to be educated and reminded.

Hopefully, the kind of inducement previously offered by American Express to their cardholders isn't required. 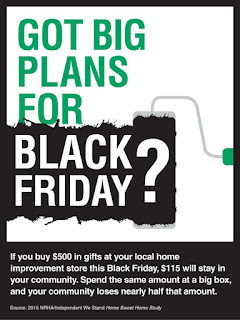 I think this is likely to be the case, because so many other retailers and independent shopping districts are now participating in the program, and marketing to consumer bases that goes beyond the segment comprised of American Express credit card holders.

Still, as traditional commercial districts begin skewing their mix of businesses and attractions to food and drink, it becomes harder to "shop locally" at the neighborhood scale, but more possible for "regionally serving small business districts."

By that I mean places with a strong representation of quality independent shops selling goods, like Manayunk or South Street in Philadelphia, Carytown in Richmond, Hampden in Baltimore, to some extent Alexandria, Virginia in the DC area, although many commercial districts have some retail outlets that people can still visit--it might be reconditioned or resale of goods stores though. 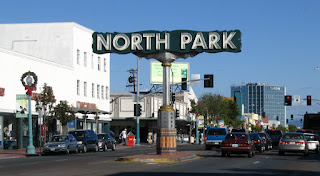 The North Park commercial district in San Diego has a great gateway sign.  San Diego funds business improvement efforts with the equivalent of a BID assessment, but many of the programs are organized as "Main Street" programs, which are more volunteer-based groups compared to staff-driven "downtown" associations driven by property owners.

Holiday marketing beyond Small Business Saturday. Many community business districts have figured out the holiday season, providing a large number of events and activities in a coordinated fashion.  And they market these events as part of a comprehensive calendar. 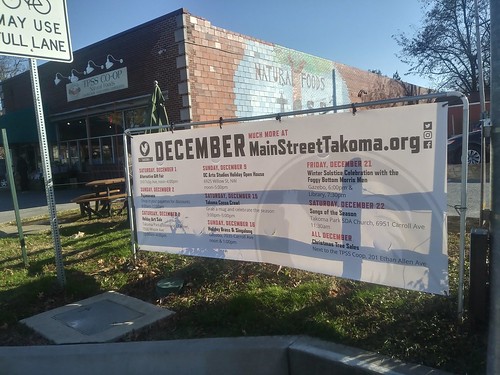 In the Petworth neighborhood of DC, this year marks the 14th edition of the Upshur Street Crafts Fair on  Saturday December 1st.  (Last year they did it two weekends in a row, I guess that didn't work out.)

Artisans sell items from booths on the street, and retail stores and restaurants participate as well.

For the few years, the Friends of the Petworth Library have held a book sale at the library in conjunction with the event too.  That's a particular smart example of leveraging existing events for other purposes, "latching on" and extending the value of the event by adding complementary activities.

Holiday Markets.  More cities are sponsoring holiday markets, modeled after the famous Christmas markets in Germany.  DC has its Downtown Holiday Market, on F Street between 7th and 9th Streets NW, next to the Smithsonian Museums there.  Baltimore has created a similar event.  Although I will say that a city needs to have a reasonably large population to make such an event work. 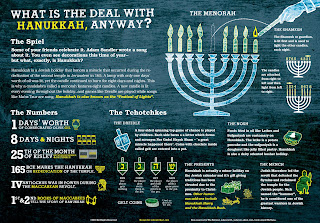 Hanukah.  The Jewish holiday of Hanukah isn't a gift-oriented holiday, although gift giving has become an element of it because of how the event and religion exists alongside other traditions.

More communities are recognizing that religious traditions other than Christian need to be better acknowledged when planning such activities.

NYC lights a menorah each year in Manhattan, billed as the "World's Largest Menorah," during the week long "Festival of Lights" in early December.

(Because of DC being the National Capital there are National Christmas Tree Lighting and Menorah Lighting events, but they don't have ramifications for stoking retail buying in traditional commercial districts.)

If your business doesn’t have many good reviews on your Google business page, or maybe has too many negative ones, But you should think of buying some good Reviews.

Buy Textnow Accounts. To get the virtual number, Buy TextNow Accounts with the USA number. Free Texting & Calling App. Completely Free Phone Service. Multiple Devices Send messages and make calls on your computer or tablet, then access them from your phone while on the go.